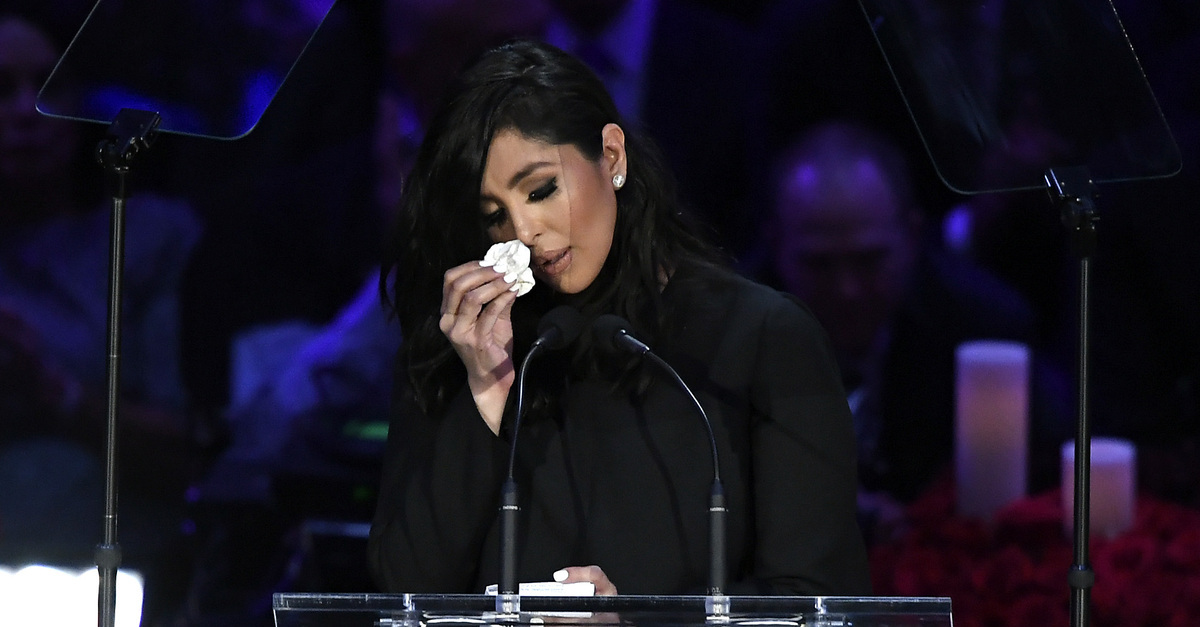 Vanessa Bryant speaks during The Celebration of Life for Kobe & Gianna Bryant at Staples Center on February 24, 2020 in Los Angeles, California.

Vanessa Bryant has two weeks to turn over nearly five years of private mental health records detailing her experiences in therapy before and after the tragic deaths of her husband, Kobe Bryant, and daughter, Gianna Bryant. The court order to produce the records comes in Bryant’s ongoing lawsuit against Los Angeles County, which alleges that first responders improperly shared graphic photos of the 2020 helicopter crash that killed her family members and seven others.

U.S. Magistrate Judge Charles Eick ruled Monday that Vanessa Bryant must produce records going back to 2017, reasoning that the documents are relevant to Bryant’s claim of emotional distress as well as to the county’s defense.

In his ruling, Eick summarized the county’s position — that any grief Bryant has suffered was the direct result of losing her husband and daughter, and not due to any leaked photos. Eick wrote:

Defendants state that they sympathize with Plaintiff for her grief at the tragic loss of her daughter and husband, and Defendants assertedly “do[ ] not in any way minimize or dispute her suffering from that loss” (Motion at 8). However, Defendants do dispute whether Defendants’ photograph-related actions or inactions proximately caused the allegedly severe and continuing emotional distress for which Plaintiff seeks monetary compensation in this action. Indeed, Defendants allege that “there has been no damage in any amount, manner, or at all by reason of any act alleged against the Defendants…”

Given the county’s defense, Bryant’s mental health records could contain important insight into her alleged emotional damages. Eick ruled that Bryant waived any psychotherapist-patient privilege by putting her emotional distress into controversy. The judge reasoned that protecting Bryant’s medical and psychological records “would allow Plaintiff to proceed with a claim on unequal terms,” in that allowing Bryant to seek monetary damages for emotional distress while simultaneously keeping the details of that distress secret would be unfair.

The judge did, however, limit the order to therapy records going back less than five years (as opposed to the twelve years requested by L.A. County) to serve “interests of proportionality.”

Eick’s ruling on Bryant’s therapy records is the latest in a string of orders over discovery disputes between the parties. Earlier in November, Eick denied the county’s request that Bryant be forced to submit to a psychological evaluation. Days prior, the judge granted Bryant’s motion ordering the depositions L.A. County Sheriff Alex Villanueva and L.A. County Fire Chief Daryl Osby.

Bryant and L.A. County are also battling over discovery documents that no longer exist. In a motion filed November 8, Bryant accused L.A. County of “spoliation of evidence” and asked the judge to impose sanctions against the county for deleting some of the photos in question. In her motion, Bryant accused the county of taking “affirmative steps to destroy evidence that would enable Plaintiffs to discover the full scope of their misconduct and to protect themselves from the risk that photos of their family members’ corpses will appear without warning, forcing them to relive their trauma all over again.” The county denies any such wrongdoing, and argues that it has been cooperative with discovery demands and followed applicable court orders.  L.A. County argues that it had no obligation to preserve any photos at the time they were deleted, and that Bryant cannot prove that any deletion was done in bad faith.

Skip Miller, partner at the Miller Barondess law firm and outside counsel for Los Angeles County, provided the following statement to Law&Crime on Tuesday:

The County continues to have nothing but the deepest sympathy for the enormous grief Ms. Bryant suffered as a result of the tragic helicopter accident. We are gratified that the Court has granted our motion for access to her medical records, as it is a standard request in lawsuits where a plaintiff demands millions of dollars for claims of emotional distress.

Counsel for Vanessa Bryant did not immediately respond to a request for comment.

The documents must be produced on or before Nov. 29.