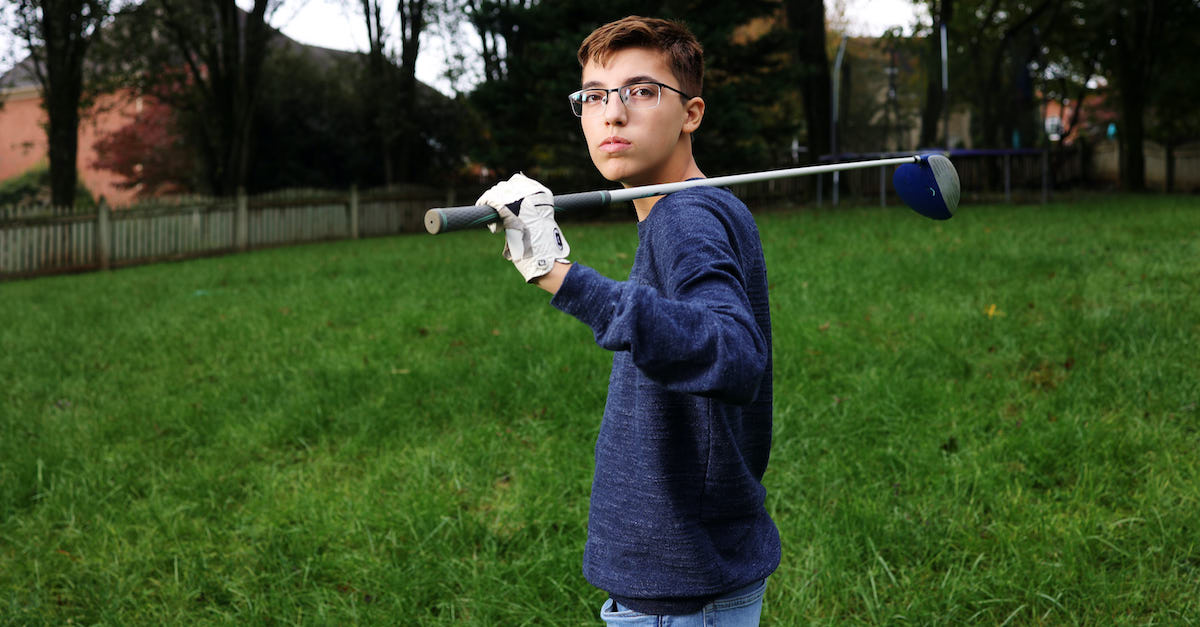 Portrait of Luc Esquivel at his home in Knoxville, TN. (Photo courtesy of Shawn Poynter/ACLU)

Luc Esquivel, a 14-year-old freshman at Farragut High School, describes himself as an avid golfer who would like to try out for the school’s team, but it is currently impossible for him to do so.

“That is because a Tennessee law categorically bars transgender students like [Esquivel] from participating on middle school and high school sports teams consistent with their gender identity,” the ACLU’s complaint states, referring to the Volunteer State’s law SB 228. “The law requires participation to be based on ‘sex at the time of the student’s birth as indicated on the student’s original birth certificate’ regardless of their gender identity.”

Though court papers shield Esquivel’s name, both the teenager and his mother have gone public about their stories.

“I was really looking forward to trying out for the boys’ golf team and, if I made it, training and competing with and learning from other boys and improving my game,” Esquivel said in an ACLU press release. “Then, to have the legislature pass a law that singled out me and kids like me to keep us from being part of a team, that crushed me, it hurt very much. I just want to play, like any other kid.”

Mother Shelley Esquivel said that the Tennessee legislature’s actions make her “so angry.”

“A mother wants to see their kid happy, thriving, enjoying being a kid. High school sports are an important part of that,” the mother said. “I know how much Luc was looking forward to playing on the boys’ golf team. It’s heartbreaking to see him miss out on this high school experience, and it is painful for a parent to see their child subjected to discrimination because of who they are. I’m proud Luc is taking this step, and his father and I are with him all the way.”

The defendants are Tennessee Gov. Bill Lee (R), Education Commissioner Penny Schwinn, Board of Education Executive Director Sara Heyburn Morrison, and each person sitting on the state’s 10-member board. The Knox County Board of Education and its commissioner Robert M. “Bob” Thomas are also named in the lawsuit.

The lawsuit seeks an injunction blocking the law, arguing that it violates the right to equal protection guaranteed by the Fourteenth Amendment of the U.S. Constitution and Title IX of the Education Amendments of 1972.

“Unless enjoined, SB 228 will deny L. equal educational opportunities and the multiple long-term benefits of participation in interscholastic athletics,” the lawsuit states. “And by singling out transgender students for exclusion, it will perpetuate discrimination against, and stigmatization of, transgender young people, and will exacerbate the already poorer mental health outcomes experienced by transgender youth as a result of such treatment.”

The ACLU describes SB 228 as one of “hundreds of anti-LGBTQ bills” pushed in state legislatures across the country this year.

Pointing out that no mainstream sporting or health organizations endorsed these measures, the ACLU notes that the American Academy of Pediatrics have opposed them, and the NCAA has reaffirmed its support for transgender athletes. The rights groups also noted that similar measures have failed federal court scrutiny, including in West Virginia.

“This is the ACLU’s fifth challenge to an anti-trans law that has passed this year,” said Leslie Cooper, the deputy director of the ACLU’s LGBTQ & HIV Project. “We will continue to fight these relentless attacks on trans youth. There is no reason, apart from the legislature’s desire to express its disapproval of transgender people, to keep Luc from playing on the boys’ golf team.”