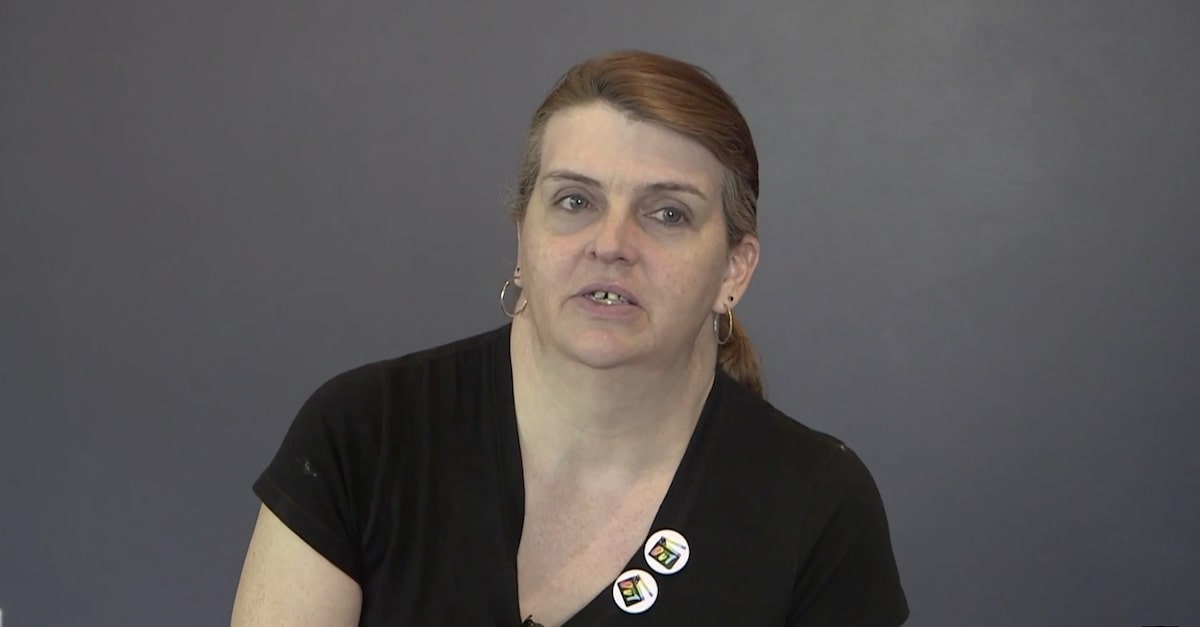 In a case of “first impression,” an Illinois appellate court ordered Hobby Lobby to pay $220,000 for forbidding a transgender employee from using the women’s restroom on the job in violation of the state’s Human Rights Act.

When she started working for Hobby Lobby in 1998, Meggan Sommerville identified as a man and used the male name assigned to her at birth. She began transitioning to female just shy of a decade later. Legally changing her name in 2010, Sommerville informed her employer of her current identity and told them about her intent to use the women’s restroom.

“Hobby Lobby changed Sommerville’s personnel records and benefits information to reflect her female identity,” Illinois Second District Appellate Court Justice Mary Seminara-Schostok, a Republican, summarized in her ruling. “However, Hobby Lobby refused to allow Sommerville to use the women’s bathroom at the store.”

The other appellate court justices rounding off the panel are Kathryn E. Zenoff, a non-partisan, and Ann B. Jorgensen, a Republican.

In 2011, Hobby Lobby issued a written warning to Sommerville for entering the women’s restroom. Sommerville testified that she “broke down crying” and was “emotionally devastated” by the reprimand. She initiated her complaint to the Illinois Human Rights Commission some two years later, starting a process that would ultimately produce watershed precedent in her state.

“Hobby Lobby’s bathroom ban gave Sommerville recurrent nightmares about bathrooms, being approached by men, and being physically assaulted and laughed at by them,” the court’s summary of the undisputed evidence states. “She also developed physical symptoms including headaches, fatigue, muscle cramps, gastric problems, and dehydration due to restricting her fluid intake.”

Hobby Lobby appealed that ruling to the state’s appellate court, which affirmed the commission on Friday.

Lambda Legal, the LGBTQ advocacy group who backed Sommerville in a friend-of-the-court brief, celebrated her victory in a press release on Tuesday.

The group’s staff attorney Kara Ingelhart called the ruling a “win for all transgender people in Illinois,” lauding the court for having “methodically destroyed every justification Hobby Lobby tried to argue for why it had discriminated against Ms. Sommerville for years.”

“The court could not have been clearer that the Illinois Human Rights Act and numerous other Illinois and federal laws prohibit employers from discriminating against their employees based on gender identity, including by excluding them from the restroom,” Ingelhart wrote in a statement. “The Illinois Commission on Human Rights got it right years ago when it ruled for Ms. Sommerville, and it’s past time for Hobby Lobby to do the right thing, and treat their transgender employees with dignity and respect.”

The three-justice panel called the award the “the highest amount ever awarded by the Commission for emotional distress”—and declared it justified.

“Here, the Commission adopted the ALJ’s finding that Sommerville experienced substantial mental and emotional distress from Hobby Lobby’s discriminatory bathroom policy,” the ruling states. “The record contains evidence that Sommerville experienced embarrassment and humiliation daily by being singled out for disparate treatment on the basis of her gender identity and being denied the ability to use the women’s bathroom. Three to four times a day, she was forced to choose whether to endure the shame and anxiety of using the men’s bathroom, risk discipline for using the women’s bathroom, or risk neglecting her job duties by leaving her workplace to use the women’s bathroom at another business. Her distress drove her to avoid liquid intake, resulting in dehydration. The stress also made her subject to bursts of crying, headaches, and nightmares regularly.”

The justices added that this strife continued for five years, giving an additional rationale for the award.

“I think the Illinois appellate court upheld the law and delivered a clear and decisive opinion that affirms the rights of the transgender community under Illinois law,” Sommerville’s attorney Jacob Meister told Law&Crime in a phone interview.

Describing himself as “elated” by the decision, Meister said he has not heard a definitive answer about whether Hobby Lobby intends any further appeal, but he hopes the company learns a lesson from a resounding defeat by a “rather conservative appellate court.” Sommerville continues to work at Hobby Lobby, he said.

“Hobby Lobby has expressed that she they think she does a very good job, and she has a very loyal customer base who loves the work that she does,” he added.

An attorney for Hobby Lobby did not immediately respond to an email requesting comment.

Update—Aug. 17 at 5:39 p.m. Eastern Time: This story has been updated to add comments made by Sommerville’s counsel in a phone interview.