A County Official Brandished a Rifle on Zoom After a Michigan Woman Condemned the Proud Boys. Now She’s Suing. 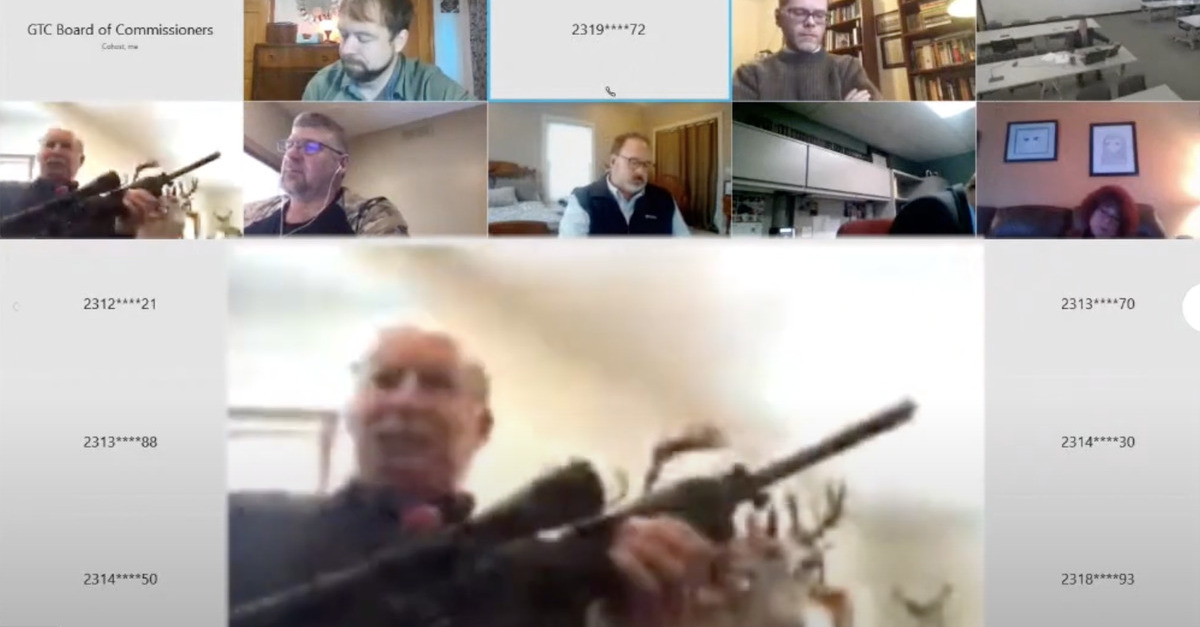 Just 14 days after the attack on the U.S. Capitol, 74-year old Patricia MacIntosh attended a virtual meeting of the Grand Traverse County Board of Commissioners in Michigan. The meeting proceeded via Zoom, and during the public comment period MacIntosh spoke up about the Commission’s response to a fellow attendee’s concerns about the Proud Boys extremist group. The Board Vice Chair Ron Clous responded to MacIntosh by brandishing a rifle onscreen. As a result, MacIntosh has filed a federal lawsuit alleging a violation of her civil rights.

MacIntosh’s complaint delivers a narrative that goes far beyond a Zoom-antic gone wrong, painting the picture of a Commission in lock-step with the Proud Boys. In March 2020, the Board of Commissioners welcomed members of the Proud Boys to speak in support of declaring the county “Second Amendment Sanctuary.”

“Ultimately,” reads the complaint. “Defendant Clous and the Board Chairman voted consistently with the Proud Boys’ wishes and later publicly praised them.” Thereafter, the Proud Boys were involved in attacks on the Michigan State Capitol and in the January 6th “violent insurrection,” the complaint says.

It was in that context that another citizen demanded that the Commission publicly denounce the Proud Boys and the violence with which they have participated. Board Chairman Rob Hentschel quickly shut down that citizen, telling her to “save her opinions for her magazines and editorials,” and accusing her of spreading misinformation about the Proud Boys.

Another commissioner raised concerns to Hentschel, asking, “is it appropriate to be commenting on public comments in this manner?”

MacIntosh then had the floor, and used her time to criticize the Commission’s support of the Proud Boys. She continued, referencing the insurrection in Washington D.C., and an anti-government militia group’s plot to kidnap Michigan’s Gov. Gretchen Whitmer (D). MacIntosh concluded her remarks, beseeching the Commission, “Will you please make some sort of a public statement for the community that you do not accept the behaviors [of extremist groups]?”

Commissioner Clous, seated in front of multiple mounted deer heads, briefly left the Zoom hearing. Shortly thereafter (and while MacIntosh was speaking), Clous returned “brandishing a high-powered rifle as his ‘public statement,'” along with a “menacing smirk.” During the bizarre onscreen moment, Hentschel can be seen laughing.

Video of the event can be viewed here.

Clous’ actions have sparked outrage in Michigan and beyond. The Michigan State Attorney General’s office has opened an investigation, and a follow-up Commission meeting devoted nearly five hours to citizen discussion of the event. According to MacIntosh’s attorneys’ press release, however, “Although the community demonstrated outrage by repeatedly demanding Clous’ resignation and/or an apology, none has been offered.” Furthermore, “The County Commission has additionally failed to censure Clous’s threatening behavior or move to prevent him or other Commissioners from similar unconstitutional actions in the future.”

MacIntosh filed a federal lawsuit Monday in U.S. District Court for the Western District of Michigan. The complaint alleges a violation of MacIntosh’s First Amendment rights under 42 USC § 1983, and requests both damages and an injunction against the Commission’s allowing weapons during meetings.

Brandishing a gun, alleges MacIntosh, was Clous’ way of telling her that she should “stop or else.” Despite the fact that the entire event unfolded over Zoom, MacIntosh pleads that Clous’ actions implied the risk of grievous bodily harm if she continued speaking out. Such threats, MacIntosh argues, not only violated her First Amendment rights, but also made her feel fearful, intimidated, and physically threatened. As a result, MacIntosh has not only been deterred from participating in other public meetings, but has also experienced a litany of physical symptoms such as weight loss, nausea, insomnia, nightmares, tremors, and heart palpitations.

MacIntosh explained to press, “I didn’t think he was going to shoot me, obviously, but I do think his whole point was to intimidate me and threaten me and anyone else who’s going to speak out … and see if he can stir up masses of people who are just looking for things to fight about.”

MacIntosh requests unspecified compensatory and punitive damages, along with attorneys fees. Ron Clous did not immediately respond to a request for comment.

[screengrab via Grand Traverse County Board of Commissioners]