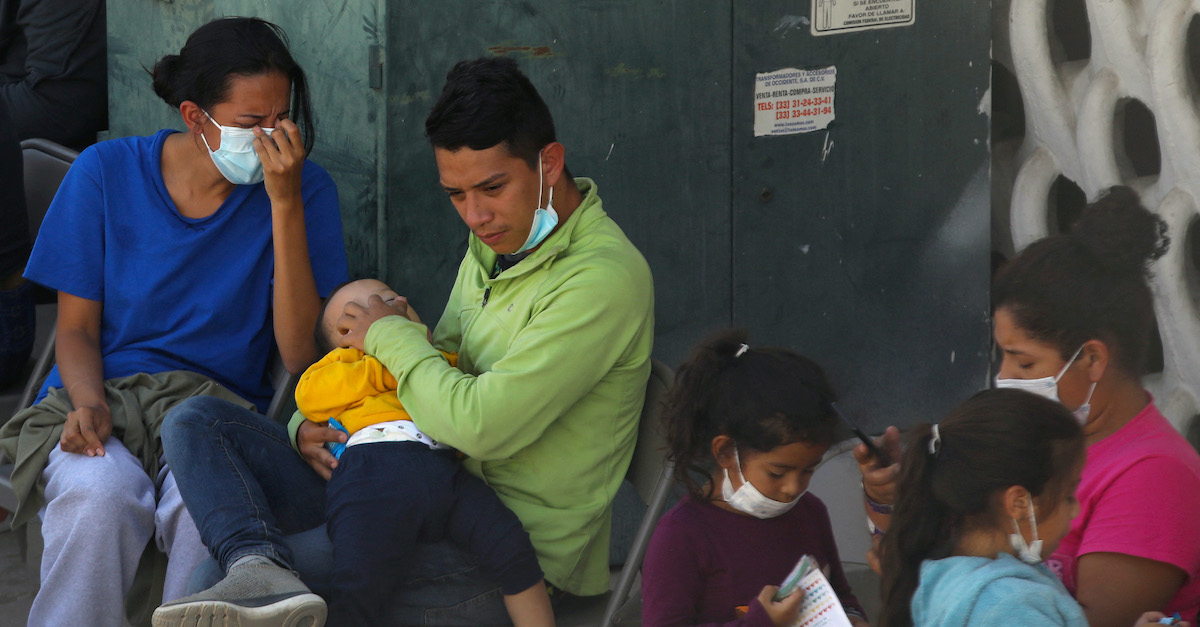 A migrant woman cries (L) next to her family after being expelled from the United States under Title 42, at the National Migration Institute station in Ciudad Juarez, State of Chihuahua, Mexico on April 5, 2021.

If current trends in refugee admissions into the United States hold firm for the second half of this fiscal year, President Joe Biden will not only fall short of his goal to dramatically welcome more of the world’s tired, poor, and huddled masses than his predecessor, he will also have admitted far fewer refugees than any other president in U.S. history — and less than half the number that Donald Trump’s administration welcomed at its lowest.

That is the marquee finding of a report issued by the International Rescue Committee (IRC) titled “More of the Same,” which released a surprising analysis on Monday showing the dwindling number of refugee admissions under the Biden White House.

According to a chart embedded in its four-page report, the Biden administration has admitted 2,050 refugees roughly halfway through the current fiscal year, which researchers estimate will lead to a final annual tally of 4,510. The Trump administration admitted 11,814 refugees in 2020, its final and most restrictive year. Biden ran on an immigration platform emphasizing compassion, inclusiveness, and a break from Trump-era policies that he described as cruel and contrary to the nation’s values.

But Biden has faced fire from his right and his left in implementing those policies: Republicans played up a supposed “border crisis” with thin support in Department of Homeland Security statistics, and progressives have slammed him for falling short of his stated goals.

The humanitarian group attributed the slow projections to Biden’s delays in signing his promised presidential directive raising the cap from the 15,000 of the Trump era to 125,000 refugees.

“Each day that the Trump administration’s refugee policy remains in effect is also another day in which the Biden Administration’s quick work to dismantle discriminatory travel bans remains unfinished,” the IRC’s vice president Nazanin Ash wrote in a statement. “The current restrictive and discriminatory categories amount to a near-total ban on Muslim refugees and most refugees from Africa, Asia, and the Middle East.”

The White House did not immediately respond to an email requesting comment.

In February, the Biden administration issued an executive order aimed resettling climate refugees and submitted a report to the House and Senate Judiciary Committees setting a goal to resettle 62,500 refugees this year, more than 10,000 than Trump admitted in 2017, his first full year in office.

“To respond to all of these unforeseen and urgent situations, a revised target of 62,500 is proposed and is justified by grave humanitarian concerns and is in the national interest,” the White House told the House and Senate on Feb. 12. “At the present time the global refugee crisis continues unabated, and the extremely low number of refugees resettled worldwide is the lowest in decades. The absence of resettlement places and other durable solutions like safe and voluntary returns to countries still in conflict justifies the need to significantly expand the number of those resettled to the United States as soon as possible.”

While applauding the sentiment and the goal, the humanitarian group slammed what it called an “unexplained and unjustified eight-week delay in issuing the revised refugee admissions policy.”

Enacted during Trump’s final days in office, those policies were published on the Federal Register on Nov. 6, 2020, three days after an election the 45th president decidedly lost. Humanitarian groups note that Biden has a popular mandate to change his predecessor’s policies.

“The refugee admissions program has a proud bipartisan history and a legacy of success in the US,” Ash, the IRC vice president, also wrote in a statement. “The American public believes, by wide margins, that the US should be a place of refuge for those seeking safety from violence and persecution.”

Read the IRC’s report below: