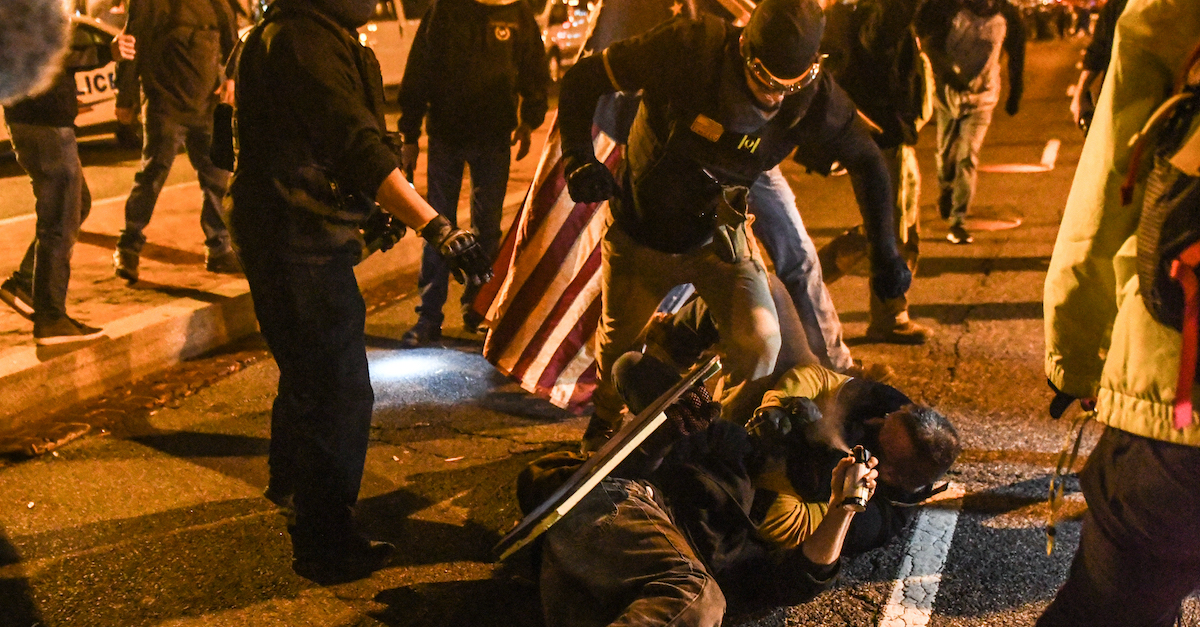 Members of the Proud Boys kick an antifascist activist on the ground during a protest on Dec. 12, 2020 in Washington, D.C., per Getty.

A little less than a month before the U.S. Capitol riot, the Proud Boys converged on the streets of Washington, D.C., where they were seen engaging in street fights and destroying Black Lives Matter signs hanging from two historic African-American churches. The Metropolitan African Methodist Episcopal Church, one of those churches, won a default judgment against the extremist group on Friday.

Proud Boys leader Enrique Tarrio, who was arrested on the day Metropolitan A.M.E.’s lawsuit was filed, appeared in court on Friday without a lawyer. Tarrio has until April 30 to respond to the claims filed against him personally. Proud Boys International, LLC did not appear in court and had a default judgment entered against them.

Lawyers’ Committee for Civil Rights Under, an advocacy group representing the historic Black church, announced both developments following a hearing on Friday morning before D.C. Superior Court Judge Heidi Pasichow, whom the lawyers say issued her ruling of default from the bench.

“Today’s ruling was a victory in favor of decency and against violent racism,” the committee’s acting president and executive director Damon Hewitt wrote in a statement. “The lawsuit was filed with the purpose of holding the Proud Boys and their leadership accountable for their campaign of racist violence, which they perpetrate with impunity. We will continue to move forward with this case to ensure justice is served so that the Proud Boys and similar groups are put on notice that they are not above the law.”

Rev. William H. Lamar, IV, the Metropolitan A.M.E. Church’s pastor, added that the Proud Boys “share the white supremacist DNA of so many groups that came before them.”

“These groups sought to use physical, political, economic, social, and theological violence to intimidate our ancestors,” the reverend wrote. “The Proud Boys are using the same playbook. Our mothers and fathers were not intimidated then. We will not be intimidated now. We have already won because we will never stop fighting. We will always fight for the flourishing of humanity and the earth that sustains us. We declare that we will never allow the forces of death and destruction—the forces that animate the Proud Boys and their kin—to prevail.”

On Dec. 12, Proud Boys descended upon Washington, D.C., in a showing of their refusal to admit that President Joe Biden won the 2020 election. Their violent melees with racial justice activists—and alleged vandalism of two Black Lives Matters signs hanging on historic African-American churches—presaged the pro-Trump riots less than a month later at the U.S. Capitol.

Metropolitan A.M.E.—the spiritual home of legendary Black figures like Frederick Douglass—called it “no accident” that the Proud Boys visited and damaged its property.

“For several months, defendants planned and coordinated their efforts, both on the internet and in person,” the church wrote in a complaint on Jan. 4. “They exhorted each other with inflammatory language: ‘buy ammo [and] clean your guns’ and ‘[t]onight we don’t sleep . . . . Tonight we keep our enemies awake. Tonight we become nightmares.’”

Tarrio, the Proud Boys chairman, boasted to the Washington Post about the sign-burning from the Asbury United Methodist, which is not a party to the new lawsuit.

“I’ll say it again… and I’ll say it loud for the people in the back… I’M DAMN PROUD I DID IT!” Tarrio’s post on Parler crowed. 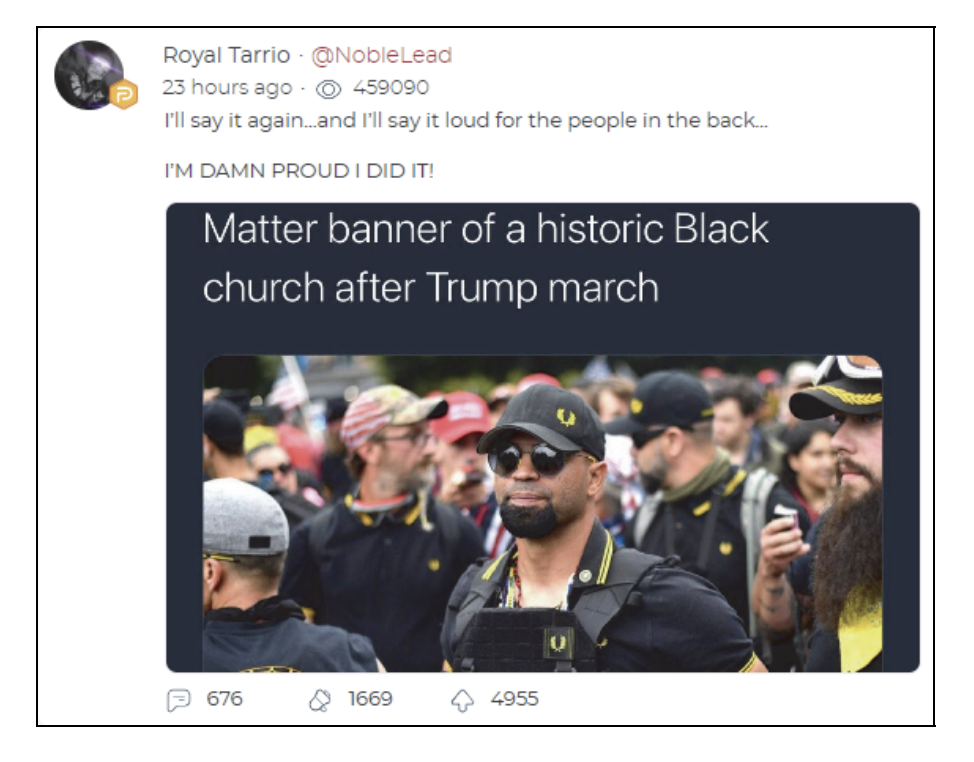 On Jan. 4, the same day he would be sued in civil court, Tarrio would find himself arrested by Metropolitan Police on felony possession charges that he brought two high-capacity firearm magazines branded with his group’s insignia into Washington, D.C. That criminal prosecution led Tarrio to be banned from the city on the day of the siege upon the U.S. Capitol, but several other Proud Boys attended and would be indicted in connection to the riot.

The Proud Boys have also been sued by nearly a dozen lawmakers in a lawsuit naming former President Donald Trump, Rudy Giuliani, and the Oath Keepers militia as co-defendants.

Metropolitan A.M.E. has solicited the public’s help in identifying other people they believe may have been involved in vandalizing the church’s property, sharing video footage and still images of the suspects.