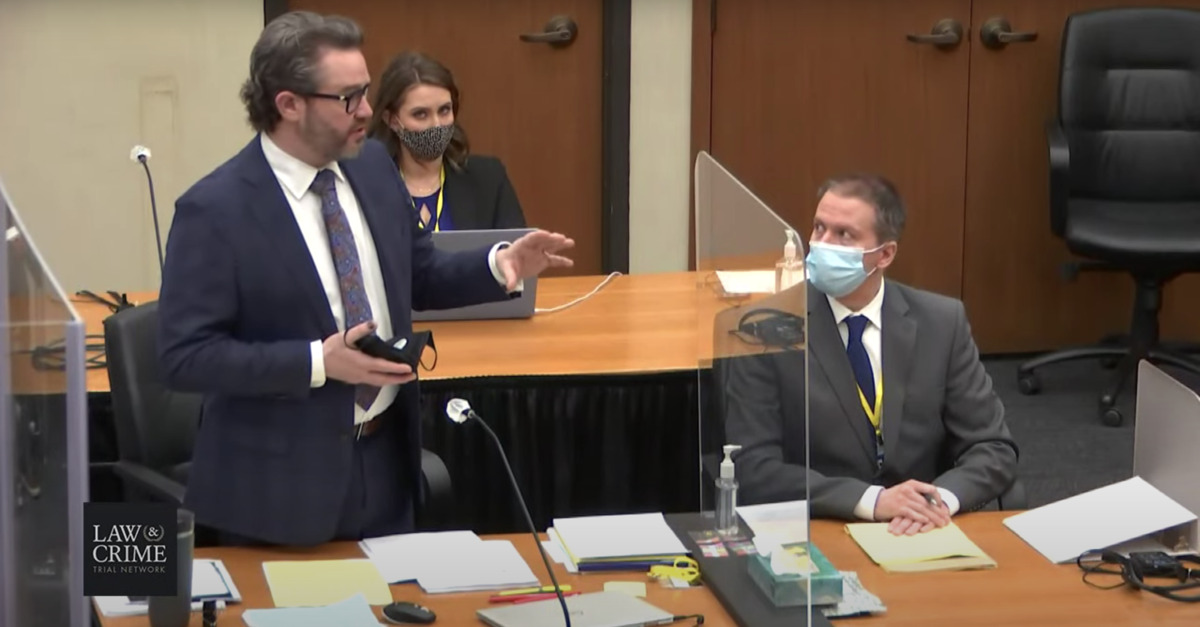 An attorney for former Minneapolis cop Derek Chauvin on Monday morning moved to halt his client’s murder trial in the death of George Floyd, but the court denied that request after hearing from the prosecution.

Nelson also asked the court to re-conduct the typically lengthy process of voir dire, where jurors are examined for their suitability (or lack thereof) to sit in judgment on a case, based on the new and nearby locus of outrage over the police shooting of an unarmed Black man; Wright was killed some 10 miles away from the Hennepin County Courthouse and Brooklyn Center is part of the Twin Cities metropolitan area.

“At this time I am requesting, again, sequestration of the jury in view of the incidents of last night,” Nelson began. “As I’m sure the court is aware, an officer-involved shooting took place in the City of Brooklyn Center, Minnesota. As a result of that, there was some fairly extensive civil unrest that occurred. I would note for the court that we have at least one juror who is a resident of that particular city and other jurors who have connections to Brooklyn Center.”

The defense attorney went on to point out the “high profile” nature of the Chauvin case which “evokes a lot of emotion.”

Nelson said he had long been concerned about jurors “being exposed extensively to the media” both before and during the trial and was worried, after Wright was killed by police, that jurors had been “cautioned only to avoid news about” Floyd’s May 25, 2020 death.

“I understand it is not this case,” the defense attorney continued. “I understand that it does not involve these parties. But the problem is: is that the emotional response that that case creates sets the stage for a jury to say, ‘I’m not going to vote Not Guilty because I’m concerned about the outcome.’ During voir dire we had many many jurors who, umm, this, on both sides of the political or social debate, who expressed concern about the out–if they don’t agree, if the public doesn’t agree with the verdict. This incident last night highlights, and I think brings it to the forefront of the jury’s mindset, that a verdict in this case is going to have consequences.”

Nelson finished his motion by saying he would also be fine with a lesser order restricting all jurors’ access to media.

“We don’t believe that sequestration would be a remedy that would be appropriate or, frankly, effective in this matter,” the state’s jury selection expert Steven Schleicher said in opposition to the defense motion. “As counsel pointed out, this is a different case, it’s a different department, it is an officer-involved shooting, it is something that happened nearby. We really don’t know what the facts of the case are at this particular point as those things are unfolding but world events happen. Things continue to happen in the state despite the fact that we’re all here in trial. That’s just what happens.”

Schleicher went on to say he wasn’t generally opposed to a ban on media consumption but warned that such a ban would be “very difficult” and likely to result in unnecessary accusations of juror misconduct due to the pervasive way that media functions.

The court agreed with the prosecution on the motion and did not address the defense’s idea of banning access to media.

“This is a totally different case,” Judge Cahill said while making arm motions that suggested the Wright situation was in no way germane to the case before him. “There is some civil unrest and maybe some of the jurors did hear about that.”

“It’d be a different story if it was civil unrest following another verdict–where the jury can see what the consequence of certain verdict might be in a similar case,” the court noted. “But that’s not this case.”