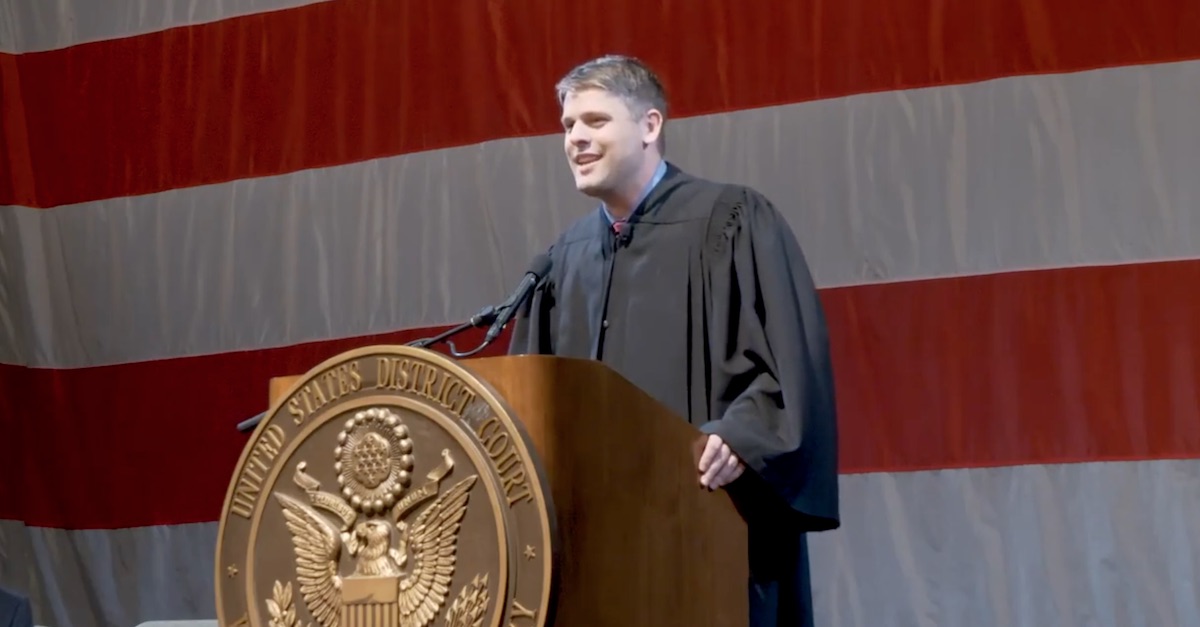 In a Tuesday letter, Democrats on the Senate Judiciary Committee said that committee chairman Sen. Lindsey Graham (R-S.C.) should focus on the pandemic instead of installing former Brett Kavanaugh clerk and conservative judge Justin Walker on the Court of Appeals for the D.C. Circuit for a lifetime.

“We understand that you intend to hold a nominations hearing on Wednesday, May 6,” the letter began. “Given the importance of focusing the Committee’s work on responding to the public health and economic fallout from the coronavirus pandemic, we ask you to delay this hearing until the Committee has had the opportunity to address COVID-related issues.”

Democrats said proceeding right away is not necessary because there’s plenty of time.

“[H]olding a nominations hearing at this point in time is simply unnecessary. Given the Senate’s proposed schedule for the remainder of the 116th Congress, there is ample time to hold a nominations hearing at a later date. Moreover, there is no urgency to moving lifetime appointments at this juncture,” they said. “There is, however, considerable urgency — and growing public demand — for oversight of the federal government’s response to COVID-19.”

“Now is not the time to process routine judicial nominations. We therefore urge you to delay the May 6 nominations hearing and instead focus the Committee’s efforts on responding to the COVID-19 pandemic and protecting the lives and livelihoods of all Americans,” the letter concluded.

We’re just going to guess that Sen. Graham is not inclined to oblige a request for a delay. President Donald Trump recently criticized Democrats for attempting to gum up the works of the confirmation process, even though the Senate is majority Republican. Trump said that many of these candidates for lifetime appointments could probably be vetted in an hour’s time.

And Senate Majority Leader Mitch McConnell (R-Ky.) has stated publicly that 2020 is the year of “leave no” judicial “vacancy behind.”

Walker, a 38-year-old former clerk for Kavanaugh when Kavanaugh was a judge on U.S. Court of Appeals for the D.C. Circuit, has been nominated to the same court. It is the nightmare scenario for liberals that they feared was coming. He would replace soon-to-be retiring George W. Bush-appointed Judge Thomas Griffith.

The Senate confirmed Walker to the U.S. District Court for the Western District of Kentucky in Oct. 2019 despite outcry by Democrats and the American Bar Association (ABA) about his qualifications or lack thereof.

Prior to his confirmation to the district court, the ABA gave Walker a “not qualified” rating. The ABA said that Walker was too inexperienced to serve on the federal bench.

Walker, who was a law professor at the University of Louisville and is a long-time Federalist Society member, simply did not have the trial experience to merit a qualified rating, the ABA said.

“The Standing Committee believes that Mr. Walker does not presently have the requisite trial or litigation experience or its equivalent,” the chair of the ABA’s Standing Committee Paul T. Moxley wrote in July. “Mr. Walker’s experience to date has a very substantial gap, namely the absence of any significant trial experience. Mr. Walker has never tried a case as lead or co-counsel, whether civil or criminal.”

“Mr. Walker is less than 10 years out of law school, has never tried a case, has never served as co-counsel, and it’s not clear how much of his 10 years has even been spent practicing law,” he said.

Sen. Feinstein said that Walker’s lack of experience was not the only worrying aspect of his potential confirmation.

“He has opposed the ability of federal agencies to adopt critical health and safety protections for workers and the environment, and he has argued that the FBI should not be independent of the president,’” she said.

Walker’s ascent to the D.C. Circuit would be a big deal. President Trump has already gotten two lifetime appointments on this crucial panel: Circuit Judges Gregory Katsas and Neomi Rao.

Walker vigorously defended Kavanaugh throughout the tumultuous Supreme Court confirmation process. Walker reportedly challenged the veracity of Kavanaugh accuser Dr. Christine Blasey Ford’s allegation in more than 70 media interviews. And Sen. McConnell is on record saying that “you cannot credibly argue that Justin Walker is not a judicial all-star.” The connections run deep, per the Washington Post:

[McConnell] knows Walker’s grandfather and first met Walker when he interviewed the future majority leader for an article for his high school newspaper. McConnell had previously recommended Walker for the Western District seat and in January, personally accompanied the judge to the Oval Office to meet the president, although that conversation would ultimately veer to Trump’s then-looming impeachment trial.

Trump, McConnell recalled, came away impressed with Walker during the 15-minute conversation and connected well with him. Walker is the youngest nominee to the D.C. Circuit since 1983, and the first from outside Washington since 2005. “I thought it might be a good idea to go outside the Beltway” for the D.C. vacancy, McConnell said. “There are plenty of D.C. lawyers that salivate over this job.”

For more on Walker, check out his speech after being confirmed to the district court. McConnell and Kavanaugh were in attendance.

Around the 2:30-mark of the video, Walker turned to Kavanaugh, who spoke earlier in the ceremony and administered Walker’s oath of office.

“Justice Kavanaugh, what can I say … that I haven’t already said … on Fox News?” Walker asked, obviously referring to his defense of Kavanaugh during the aforementioned Supreme Court confirmation hearings. The audience laughed.

Walker thanked the Senate majority and made a point to say to the Senate minority, “No hard feelings.”

“On Holy Thursday, an American mayor criminalized the communal celebration of Easter,” Walker wrote.“That sentence is one that this Court never expected to see outside the pages of a dystopian novel, or perhaps the pages of The Onion. But two days ago, citing the need for social distancing during the current pandemic, Louisville’s Mayor Greg Fischer ordered Christians not to attend Sunday services, even if they remained in their cars to worship – and even though it’s Easter. The Mayor’s decision is stunning.”