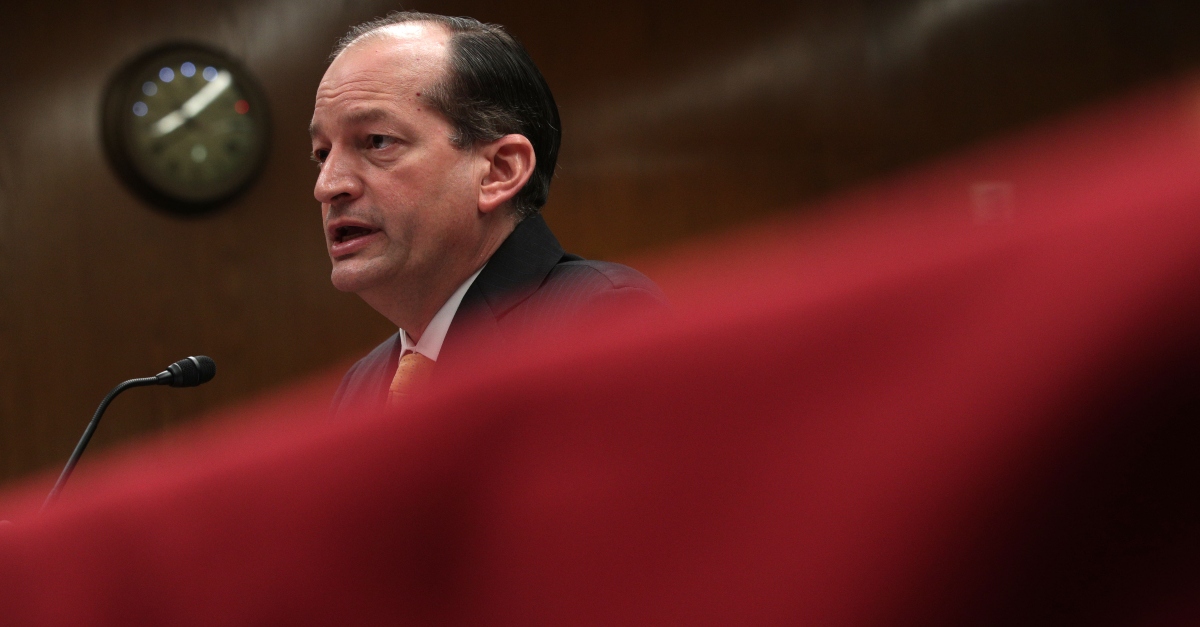 While the report lightly faults Acosta for the sweetheart deal itself, the more censorious language is reserved for how the Southern District of Florida treated Epstein’s survivors after the controversial non-prosecution agreement (NPA) was entered into in 2008.

The DOJ’s Office of Professional Responsibility (OPR) said Republican Party mainstay Acosta—appointed to his law enforcement position by George W. Bush before serving as Secretary of Labor under President Donald Trump—unnecessarily harmed the DOJ’s public image over his handling of the scandal and that he “failed to ensure that victims were treated with forthrightness and dignity.”

After the NPA was signed, Acosta elected to defer to the [Florida] State Attorney the decision whether to notify victims about the state’s plea hearing pursuant to the state’s own victim’s rights requirements. Although Acosta’s decision was within his authority and did not constitute professional misconduct, OPR concludes that Acosta exercised poor judgment when he failed to make certain that the state intended to and would notify victims identified through the federal investigation about the state plea hearing. His decision left victims uninformed about an important proceeding that resolved the federal investigation, an investigation about which the [U.S. Attorney’s Office] had communicated with victims for months. It also ultimately created the misimpression that the Department intentionally sought to silence the victims.

“[T]he failure to reevaluate the strategy prior to interviews of victims and discussions with victims’ attorneys occurring in 2008 led to interactions that contributed to victims’ feelings that the government was intentionally concealing information from them,” the report continues.

As for that alleged reputational damage to the DOJ, the report’s executive summary only hints at the issue while absolving the larger agency and Acosta of any wrongdoing worth punishment: “Acosta’s decision to decline to initiate a federal prosecution of Epstein was within the scope of his authority, and OPR did not find evidence that his decision was based on corruption or other impermissible considerations, such as Epstein’s wealth, status, or associations.”

The OPR report also calls out “the government’s lack of transparency and its inconsistent messages” to victims, noting that this left many of Epstein’s survivors “feeling confused and ill-treated by the government” while giving them and the broader public the impression that the government “colluded with Epstein’s counsel.”

The internal DOJ watchdog concluded that Acosta’s decision to cut bait with survivors after inking Epstein’s slap-on-the-wrist “undercut public confidence in the legitimacy of the resulting agreement.”

In 2007, federal prosecutors, under the leadership of Acosta, quietly worked on securing the secret NPA with the alleged intelligence asset and provider of young sex slaves to the world’s elite—which ensured that Epstein and his co-conspirators would not be prosecuted federally in exchange for Epstein’s guilty plea to much less serious state prostitution charges. The deal was signed in 2008. In early 2019, a federal judge ruled the NPA violated federal law.

Ultimately, Epstein’s connections enabled him to serve a 13-month sentence in county jail and home detention for solicitation and procurement of minors for prostitution after he admitted to paying for nude massages that occasionally turned sexual. Epstein’s alleged co-conspirators were shielded from prosecution under the extraordinary and unprecedented agreement and an ongoing probe into his worldwide sex trafficking operation was shut down.

Whispers about the deal quickly spread across the internet, throughout South Florida and within the serially-violated minds of Epstein’s victims, their friends and family members–but years passed without any real developments in the case until The Miami Herald‘s Julie K. Brown published her groundbreaking investigative journalism series “Perversion of Justice.”

Past occasionally bears a striking resemblance to prologue and Brown’s journalism lead to increased law enforcement interest in the Epstein affair–even the very rare self-reflective kind. In early 2019, the DOJ announced that they were launching an inquiry into Acosta’s role after congressional Democrats and Sen. Ben Sasse (R-Neb.) issued letters to the law enforcement agency demanding answers over the then-labor secretary’s actions.

As for the NPA itself, the report found the decision was “within the scope of Acosta’s broad discretion” but “OPR concludes that Acosta’s decision to resolve the federal investigation through the NPA constitutes poor judgment.”

“Acosta failed to consider the difficulties inherent in a resolution that relied heavily on action by numerous state officials over whom he had no authority; he resolved the federal investigation before significant investigative steps were completed; and he agreed to several unusual and problematic terms in the NPA without the consideration required under the circumstances,” the report says.

Sasse, for his part, released a statement projecting outrage in response to the findings.

“Letting a well-connected billionaire get away with child rape and international sex trafficking isn’t ‘poor judgment’ – it is a disgusting failure,” the Nebraska Republican said. “Americans ought to be enraged. Jeffrey Epstein should be rotting behind bars today, but the Justice Department failed Epstein’s victims at every turn. The DOJ’s crooked deal with Epstein effectively shut down investigations into his child sex trafficking ring and protected his co-conspirators in other states. Justice has not been served.”