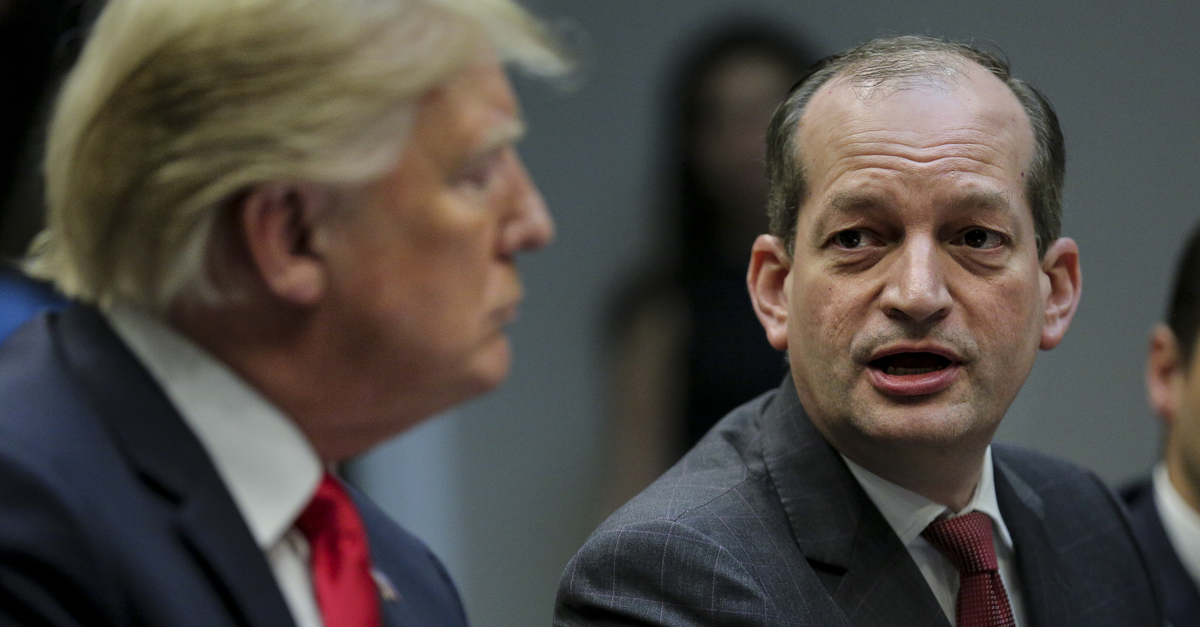 The U.S. Department of Justice (DOJ) has opened an investigation into the Trump administration’s Secretary of Labor Alex Acosta over his role in the controversial sweetheart deal handed out to billionaire pedophile Jeffrey Epstein.

Epstein was originally accused of trafficking over 40 underage girls–and molesting in excess of 100–while often forcing them to have sex with powerful men rumored to be high-profile players in both of America’s major political parties.

This infamous and vast underage sex-trafficking operation is sometimes known as “The Lolita Express“–a reference to a private plane owned by Epstein where many of the girls were allegedly forced to service the nation’s elite.

In 2007, federal prosecutors, under the leadership of Acosta, who was then the U.S. Attorney for the Southern District of Florida, quietly entered into a secret non-prosecution agreement with the billionaire which ensured that Epstein and his alleged co-conspirators would not be prosecuted federally in exchange for Epstein’s guilty plea to much less serious state prostitution charges.

Ultimately, Epstein’s connections apparently got him a slap on the wrist and he served 13 months in a county jail and home detention for solicitation and procurement of minors for prostitution after he admitted to paying for nude massages that occasionally turned sexual. Epstein’s alleged co-conspirators were all shielded from prosecution under the extraordinary and unprecedented agreement and the FBI’s ongoing probe closed up shop.

Investigative reporter Julie Brown broke the scandal by unearthing a series of courthouse documents that outlined the extent of the agreement between Acosta’s office and Epstein–including the fact that the billionaire was allowed to leave the jail and work from for much of the time under the auspices of “work release” during his unusually lenient sentence.

After Brown’s report in the Herald, however, attention focused on the Epstein plea agreement again.

Those asks have now been answered.

The DOJ announced late Wednesday that their Office of Professional Responsibility (OPR) will spearhead an investigation into Acosta’s befuddling Epstein decision.

“Allegations of professional misconduct against Department attorneys that relate to the exercise of authority to investigate, litigate, or provide legal advice are within the jurisdiction of the OPR, and on December 14, 2018, OPR Director [Corey] Amundson advised you that OPR would examine the matter and take appropriate action,” a letter addressed to Sasse by Assistant Attorney General Stephen Boyd noted.

“OPR has now opened an investigation into allegations that Department attorneys may have committed professional misconduct in the manner in which the Epstein criminal matter was resolved,” Boyd’s letter continued. “OPR will thoroughly investigate the allegations of misconduct that have been raised and, consistent with its practice, will share its results with you at the conclusion of its investigation as appropriate.”