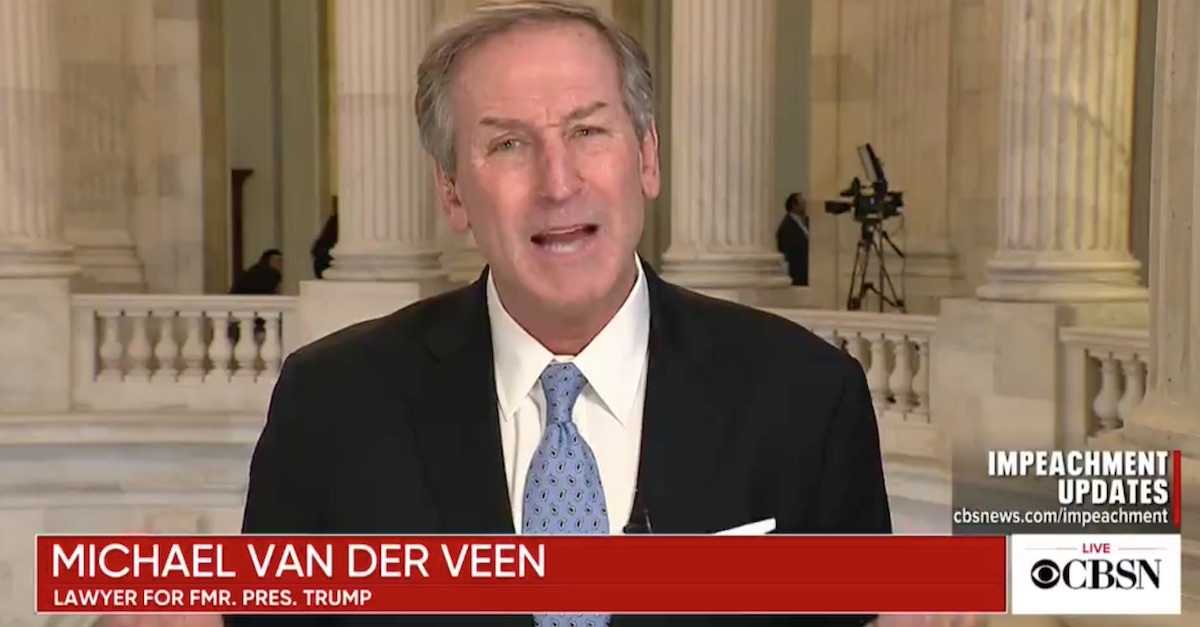 The home of one of the lawyers who represented Donald Trump in his second impeachment trial was targeted by vandals who used red spray paint to write the word “TRAITOR” on the driveway with arrows pointing towards his house, several local news outlets reported.

Detective Scott Pezick of the West Whiteland Township Police Department told the Associated Press that the crime was reported by van der Veen’s wife at approximately 8 p.m. on Friday evening. Pezick added that there had not been any arrests made in connection with the vandalism, but said the van der Veens had brought on private security and the department had been “showing a police presence to deter anything from happening.”

Van der Veen was in Washington, D.C. preparing for the close of Trump’s trial at the time of the incident, but he spoke about it briefly during an appearance on Fox News on Saturday evening.

“My home was attacked. I’d rather not go into that,” a clearly agitated van der Veen said. “My entire family, my business, my law firm are under siege right now.”

Additionally, a group of protesters demonstrated outside of van der Veen’s law office over the weekend, calling the personal injury attorney a “fascist” and chanting, “When van der Veen lies, what do you do? Convict. Convict,” according to a report from the Philadelphia Inquirer.

The incident occurred approximately one month after vandals similarly graffitied the homes of House Speaker Nancy Pelosi and Senate Minority Leader Mitch McConnell. Those who targeted McConnell’s home wrote “Where’s my money,” and “Mitch Kills the Poor” on the home’s windows while those targeting Pelosi’s home also left behind fake blood and the decapitated head of a real pig.

Van der Veen on Friday claimed that Trump had no idea Mike Pence was in any sort of danger several minutes into the Jan. 6 insurrection at the U.S. Capitol Complex in Washington, D.C. despite being told in real-time when Secret Service agents had evacuated the vice president from the Senate chambers for his safety.

The attorney also drew laughter from the chamber on Saturday morning when he said that impeachment witness depositions should be done in his private law office in Phillydelphia.