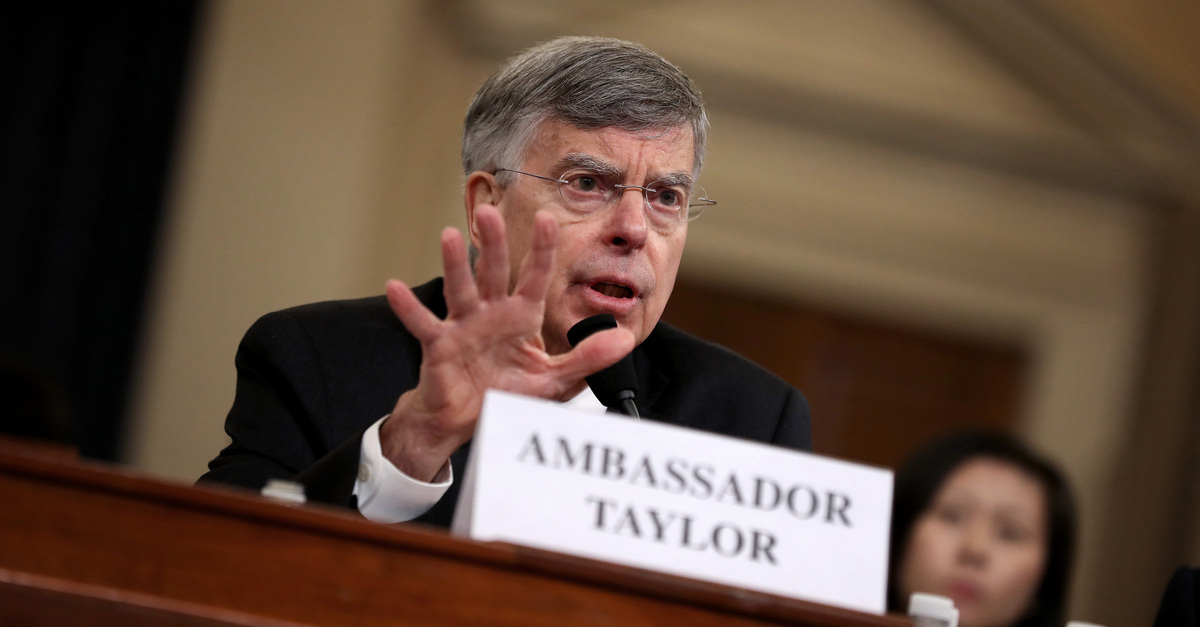 According to the New York Times, Dowd attacked Taylor thusly:

A pitiful, ignorant, insubordinate gossip with no trustworthy information.

John Dowd has said far worse things to me about myself– on the phone or in person. “Pitiful is new” though. Bill Taylor’s testimony speaks for itself. https://t.co/liYETrkKZy

When George Kent said, "you can't promote principled, anti-corrupt action without pissing off corrupt people", this is what he meant.

John Dowd is a boil on America's ass and should be treated as such.#Thursdaythoughts https://t.co/raI6QKP7fn

John Dowd would know how to identify trustworthy information, given that he allowed Don McGahn to give 30 hours' worth of testimony to Mueller's team https://t.co/WuaiYwQ3ei

Dowd’s categorization of the U.S. Chargé d’Affaires for Ukraine comes far out of left field–or, perhaps more appropriately, out of the far-right recesses of the conservative movement and White House allies.

Taylor is a well-respected former member of the U.S. military who served in Vietnam and has worked for multiple administrations and under presidents from both major U.S. political parties. Essentially a career diplomat, Taylor’s front-and-center presence in the ongoing impeachment contretemps is also his first-ever brush with any form of scandal whatsoever. Taylor, a Bronze Star recipient, graduated in 1969 from West Point; he graduated fifth in a class of 800.

As Law&Crime previously reported, Taylor went out of his way in his opening statement to note that he considers himself “non-partisan.” He has served under presidents of both parties since Ronald Reagan.

“Taylor was an extremely credible, unflappable and compelling witness who did not take sides but testified about facts that are very damning to President Trump, and the Republicans did not lay a glove on him,” mainstay D.C. attorney Ted Boutrous told the Times. “It’s way too soon to tell how the public and Congress will react, [but] both Taylor and [George] Kent provided a very strong foundation for the case against Mr. Trump.”

Dowd’s comments strayed from the script maintained by congressional Republicans–who appeared uncharacteristically loathe to criticize the diplomat in personal terms on Wednesday. The blistering verbal assault on Taylor does, on the other hand, track with the image being presented by extreme right media loyal to President Trump.

Representative Jim Jordan (R-Ohio), who lead the House GOP response, mainly attempted to present the Democratic case for impeachment as an unclear mess of charges based on second-, third- and fourth-hand information.

Jordan came closest to actually going after Taylor by repeatedly referring to him as the Democrats’ “star witness.”

Eventually reacting to the label used by Jordan, Taylor again asserted his independence and tried to shrug his way above the fray.

“Let me just say that I don’t consider myself a star witness for anything,” Taylor said.