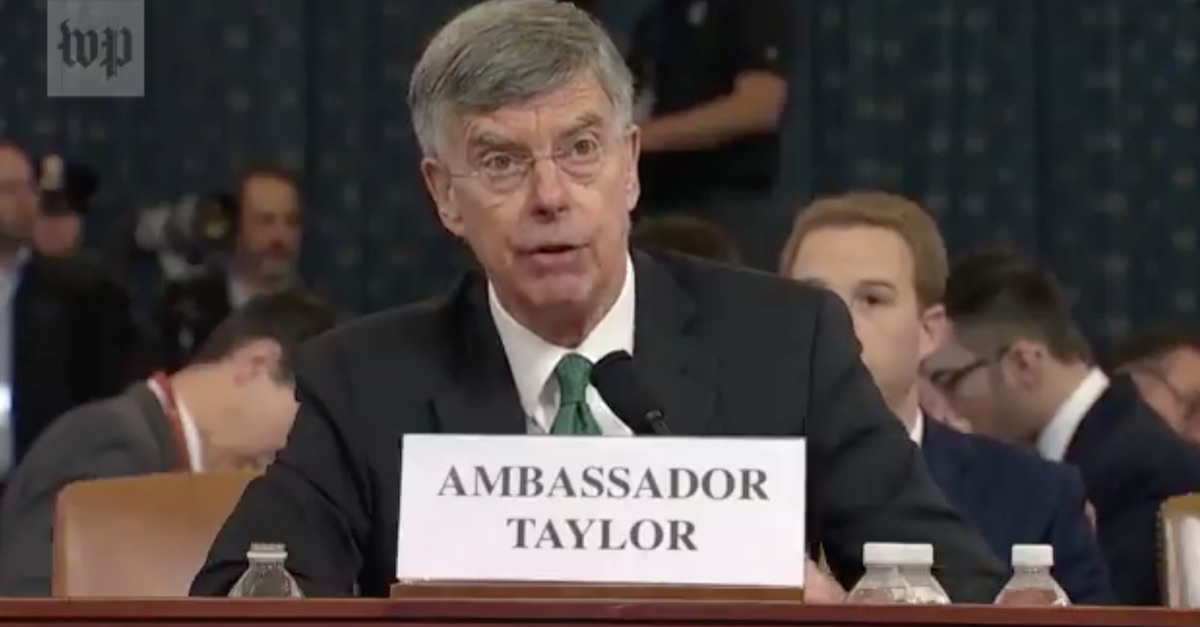 As we speak, top U.S. diplomat to Ukraine Bill Taylor is testifying Wednesday on Capitol Hill alongside State Department official George Kent. Together they are the first witnesses to appear in the public phase of the impeachment inquiry against President Donald Trump.

Taylor, who made a point in his opening statement to mention that he is “non-partisan” and has served under U.S. presidents since Ronald Reagan, provided a new detail about President Trump’s interest in getting Ukraine to launch and publicly announce investigations into the Bidens.

Taylor first reiterated what has already been said, that “Ambassador [Gordon] Sondland said, ‘everything‘ was dependent on such an announcement, including security assistance,” namely congressionally appropriated military aid to Ukraine that the Trump administration withheld as Ukraine was under attack by Russia. Taylor then described a call with Sondland, in which Sondland attempted to explain that there was no quid pro quo.

Then came the new detail.

Taylor said that last Friday a member of his staff recalled the events of July 26, which was the day after Trump and Ukrainian President Volodymyr Zelensky spoke on the phone. During that call, the memo the White House released shows, Trump brought up investigations of the Bidens and the CrowdStrike conspiracy.

Taylor said that on July 26 his staffer was with Sondland at a meeting with Zelesnky’s aide, Andrey Yermak. Taylor said that after the meeting, the staffer and Sondland went to a restaurant. While at that restaurant, Sondland spoke to President Trump by phone. The staffer told Taylor that they heard Trump asking Sondland about the “investigations.”

“At the time I gave my deposition on October 22, I was not aware of this information. I am including it here for completeness,” Taylor said.

JUST IN: A source familiar with the matter tells @NBCNews that the Taylor staffer who overheard Sondland's call with Trump is David Holmes, who was just added to the calendar to testify in closed session Friday

Daniel Goldman, the attorney asking questions for House Democrats, asked Taylor if had “ever seen another example of foreign aid conditioned on the personal or political interests of the president of the United States?” Taylor said he had not.

Goldman also followed up on the new detail.

Taylor confirmed that his testimony was what he meant: that President Trump cared more about probes of the Bidens and Burisma than he did about a U.S. ally’s defense against Russian aggression.

The reaction from legal observers to Taylor’s testimony was swift.

This sounds like something where you'd want to call the staffer as a witness. Just saying.https://t.co/kFuKOqjhCD

Trump cared more about investigating his political opponent than about Ukraine or our national security.

That sums up this scandal in a nutshell. https://t.co/2HVOA4lI2f

If I’m advising Sondland about his testimony next week, I’d offer him two words: Fifth Amendment.

His testimony is thorough, steady, compelling, credible, and devastating.