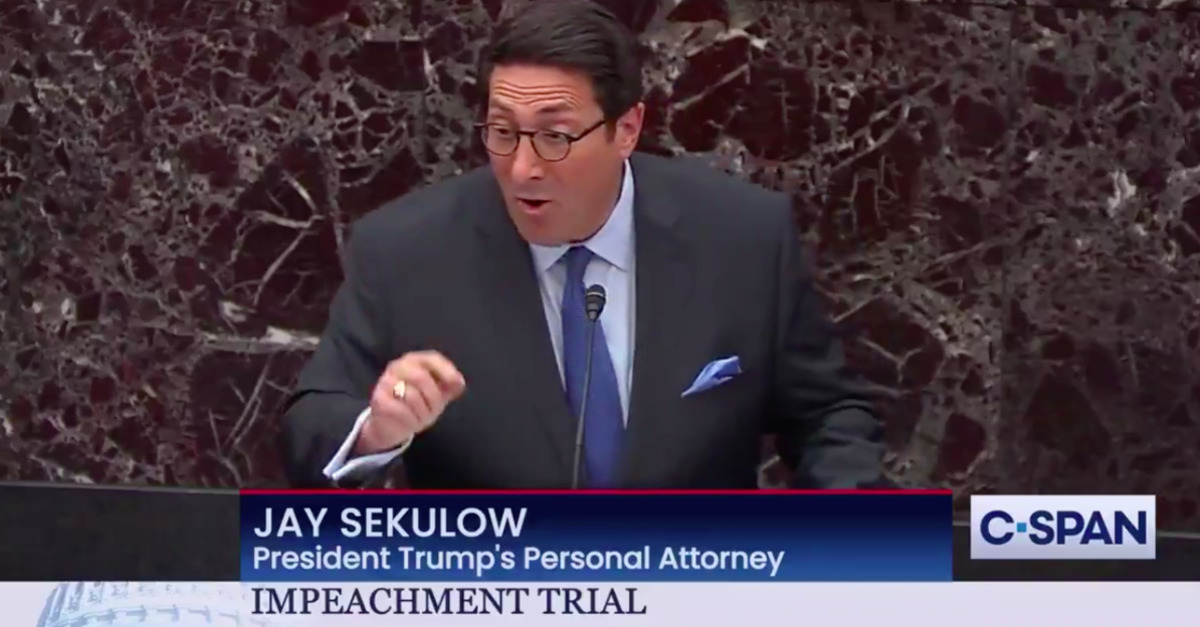 President Donald Trump’s defense attorney Jay Sekulow performed one of the most spectacular feats known to soccer fans on Tuesday. Perhaps unfortunately for the 45th president, however, he did it during a trial-like tribunal before the U.S. Senate.

”You cannot impeach a president on an unsourced allegation,” Sekulow said—in an effort dismiss an avalanche of recent news reports about a manuscript of former national security advisor John Bolton’s forthcoming tell-all about his time in the Trump White House.

“I want to be clear on this because there’s a lot of speculation out there,” Sekulow continued. “With regard to what John Bolton has said—which referenced a number of individuals—we’ll start with the president.”

I never told John Bolton that the aid to Ukraine was tied to investigation into Democrats. Including the Bidens. In fact, he never complained about this at the time of his very public termination. If John Bolton said this, it was only to sell a book.

The president’s attorney then went on to register various additional disputes with press reporting on the Bolton manuscript—including variegated bits of whinging from Vice President Mike Pence and Attorney General Bill Barr’s offices.

“If you want to call that evidence—I don’t know what you’d call that,” Sekulow went on. “I’d call it inadmissible.”

Response to Sekulow’s Tuesday afternoon performance was largely of a piece.

“Jay Sekulow seems unaware that he is now waiving whatever executive privilege might have shielded Bolton’s account of his interactions with Trump,” noted perpetual Trump critic and Harvard Law Professor Laurence Tribe. “And he’s strengthening the case for subpoenaing Bolton right away.”

Fordham Law Professor Jed Shugerman was practically beaming through his own Twitter posts on the own goal—writing that Sekulow had made “a huge legal and rhetorical error.”

“If the book is inadmissible, then lawyers and judges ask for the admissible source…” Shugerman added. “The witness himself. A ‘Meet the Author’ session.”

“What would be plainly admissible and also clearly sourced?” asked Susan Hennessy, the editor of center-right legal blog Lawfare—before answering herself: “Calling John Bolton to testify as a witness.“

Sekulow kept using this phrase “unsourced allegations from John Bolton.” What does that mean? John Bolton is a first-hand source. He’s talked directly to the president. You don’t get a better source than John Bolton.

“We don’t need the book,” Murphy told reporters. “I want Bolton. I want John Bolton. Books don’t get admitted into evidence at trials…People show up as witnesses so they can be examined and cross examined.”

Others were more blunt in their assessment of Sekulow’s unintentional upshot:

“You cannot impeach a president on an unsourced allegation,” said Jay Sekulow.

You know what *wouldn’t* be an “unsourced allegation?”

Bolton testifying to the Senate!

Team Trump is now incapable of undercutting Bolton bombshell without strengthening the case for calling him. https://t.co/E80YZKHHFA

Then call the damn witness. https://t.co/2VBLJoBArw