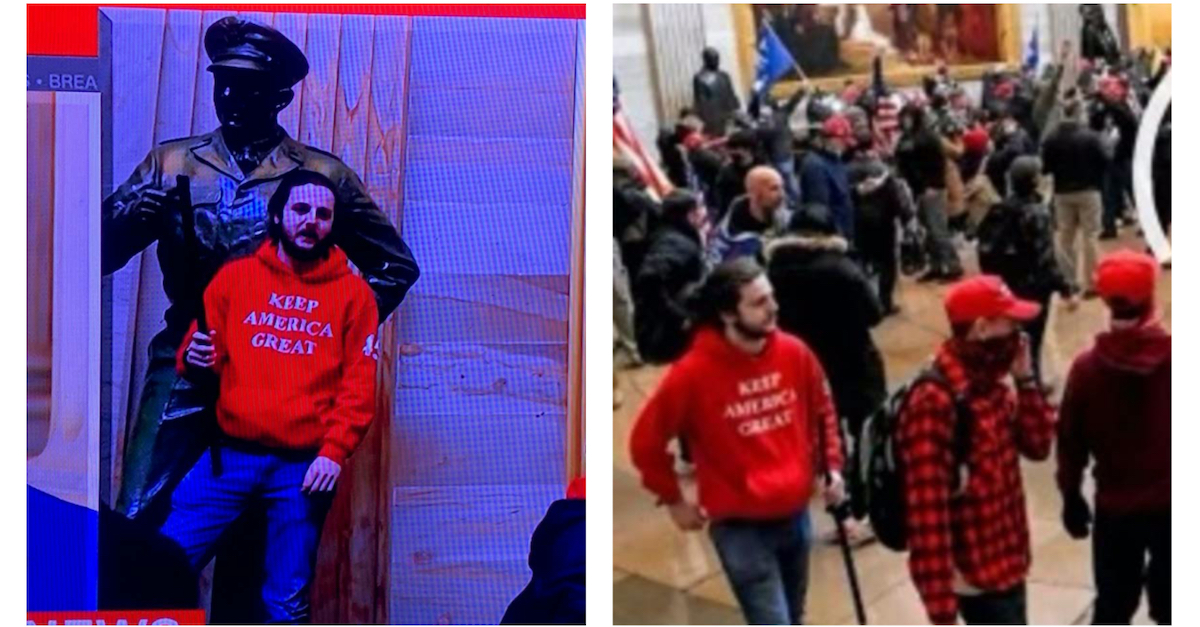 They saw someone familiar, and they said something.

A family drama played out in newly unsealed charges in the U.S. Capitol insurrection docket on Thursday, with federal prosecutors alleging that two of accused rioter Grayson Sherrill‘s relatives reached out to the FBI with copies of texts from his father.

“Witness One identified Sherrill as a family member,” FBI agent Jamie Vera wrote in a seven-page affidavit, which was initially filed under seal on Feb. 23. “Witness One told law enforcement that Sherrill’s father texted another family member a picture of Sherrill inside of the U.S. Capitol and said that it was Sherrill.”

As might be expected, this initial tipster and the suspect were not close. They only met “about once a year,” according to the charges.

“Just like Witness One, Witness Two told law enforcement that Sherrill’s father sent a ‘screen grab’ of a picture of Sherrill inside the U.S. Capitol to other family members and said that Sherrill had traveled to Washington D.C. Witness Two attached two pictures to their tip submitted to the FBI,” the FBI affidavit states.

Both of the witnesses provided authorities the same screenshot of Sherrill posing in a “Keep America Great” hoodie in front of a statue of former President Dwight D. Eisenhower, dressed in his military attire from his days as a general during World War I and World War II.

Sherrill was brandishing what authorities described only as a “long, cylindrical-shaped object.”

The FBI says that the second relative also provided another photograph of Sherrill in the Capitol Rotunda where that statue could be found.

Getty published another photo of Sherrill posing in front of the Eisenhower statue, from farther away in a wide view.

Surveillance footage also allegedly captured Sherrill in the building. He is charged with three counts of entering restricted grounds, engaging in disorderly conduct, and violently entering the Capitol. A defense attorney has not yet been assigned to him on his docket.

(Screenshots via the Justice Department)