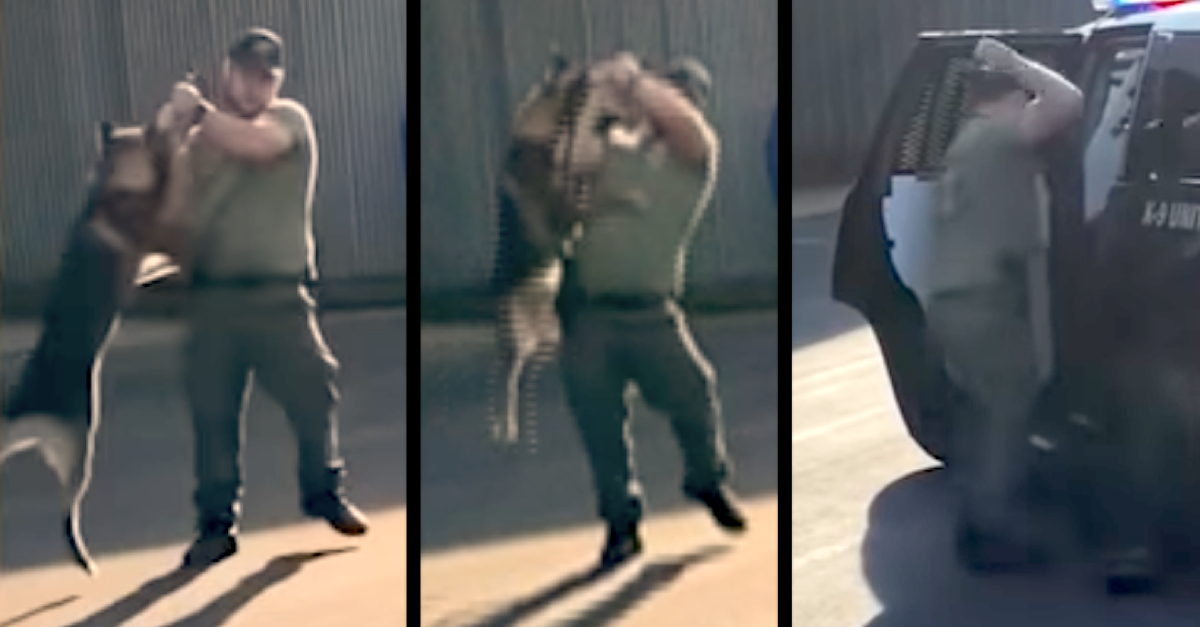 The Salisbury, North Carolina Police Department has launched a review of what it refers to as a training “incident” between an officer and a police dog. According to a statement posted online and subsequently read into television news cameras without further comment or question, Police Chief Jerry Stokes said the investigation was necessary after video became public showing a policeman treating a K-9 officer in a way many viewers found uncomfortable.

The video is said to have been first obtained by Charlotte’s local Fox affiliate; the station said “a source who wished to remain anonymous” sent the recording. The footage, which has since been disseminated by a number of area television stations and newspapers, shows an individual wearing a blue protective suit standing against a metal building that appears to be a hangar for small aircraft. An officer dressed in green walked toward the man in blue while the two men exchanged a few indecipherable words.

A police dog, subsequently identified as the K-9 officer Zuul, emerged from the rear of a waiting police SUV.

The officer in green attached a leash to the dog’s collar and began to aggressively lift the dog off the pavement while holding the leash with both of his hands. The officer twisted his body; the dog’s front paws, then its rear paws, lifted off the ground. The dog flailed while hanging from the leash as the officer twirled in a circle before carrying the dog back to the waiting SUV.

“We’re good; no witnesses,” said an unidentifiable voice off camera.

The officer carried the dog over his right shoulder. The dog’s body was draped over his back while both of his hands remained close to his chest grasping the leash.  Then, the officer audibly and forcefully shoved the dog’s body against the back of the SUV.

The dog’s rear paws fell to the ground. The officer then shoved the dog into the rear seat of the SUV, told the dog to “sit,” raised his right hand with his palm open, and appeared to strike the dog — which by then was hard to see in the frame.

“Is your camera on?” said another unidentifiable voice off camera.

A brief conversation about whether cameras were indeed recording the incident ensued from somewhere off camera before the video ended.

You can watch the video in the embedded player below:

The chief said the department’s reviews of the matter will be “thorough and fair” to ensure “due process to everyone involved.” He also said the officer in green and the dog have been separated; Zuul is being cared for by another member of the force.

The chief showed the dog to reporters but did not take questions. 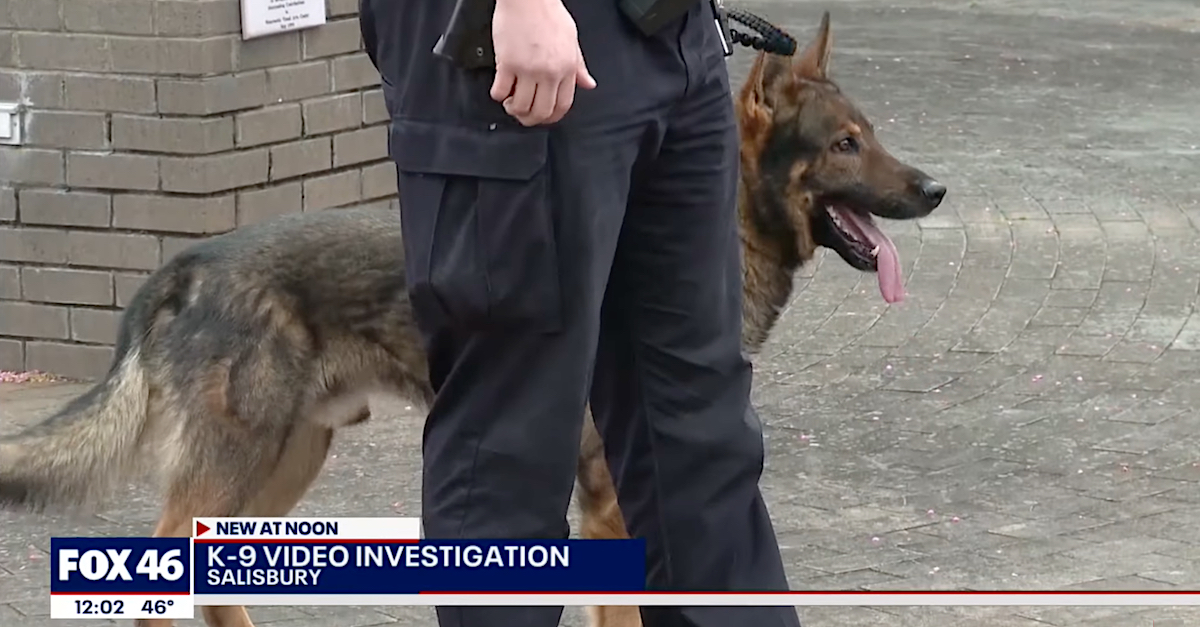 Salisbury, N.C. K-9 Officer Zuul was not harmed, according to the chief of police. (Image via screen capture from WJZY-TV.)

“To ensure integrity of the investigation of this matter an outside agency has been charged with leading the inquiry,” the chief said. “This agency is interviewing and reviewing the matter with identified experts in handling canines, including former handlers with other police departments, an owner of a police canine training firm, and internal K-9 supervisory staff. While the matter is not complete, it has been determined no Taser was used on the dog at any point by anyone. Any allegation that this occurred is false.”

“It is important to understand that a police canine is trained to use force against criminal suspects and a handler must ensure they have complete control over the dog at all times so that any use of the canine in the field is appropriate and lawful,” the statement continued. “When a canine is noncompliant with the handler’s commands, the handler is trained to correct the dog. Canine training tactics and corrective measures can sometimes be alarming out of context. SPD cannot and will not comment about whether the training tactics used in the video were appropriate, because that is still being reviewed. As part of this review we are ensuring our policy, procedures, and training we provide our handlers is appropriate.”

The chief said the “health, safety, and well-being of its human and canine officers” is his department’s “top priority.”

“The canine involved in this matter is safe, has suffered no effects from this incident, and the officer in this matter will be treated fairly in accordance with SPD policy,” the statement concluded. “SPD Chief Stokes would request the public allow the police department’s internal review of this matter to finish before drawing any conclusions.”

The officer involved has not been identified. Police also refused to say when or precisely where the video of the incident was recorded.

Watch the chief’s statement below:

The incident is certainly not the first time a human officer has been questioned regarding his treatment of a canine officer. A California cop last December was caught on camera “punching” and “beating” a police dog. Officials told reporters after that incident that the dog had “lunged at” and “attempted to bite” the officer who was the dog’s handler.

[image via screen capture from YouTube/WJZY-TV]