Hannity Said Trump Lawyer ‘Had a Great Day.’ Then the Lawyer Went on Fox and Made Democrats’ Case for Them. 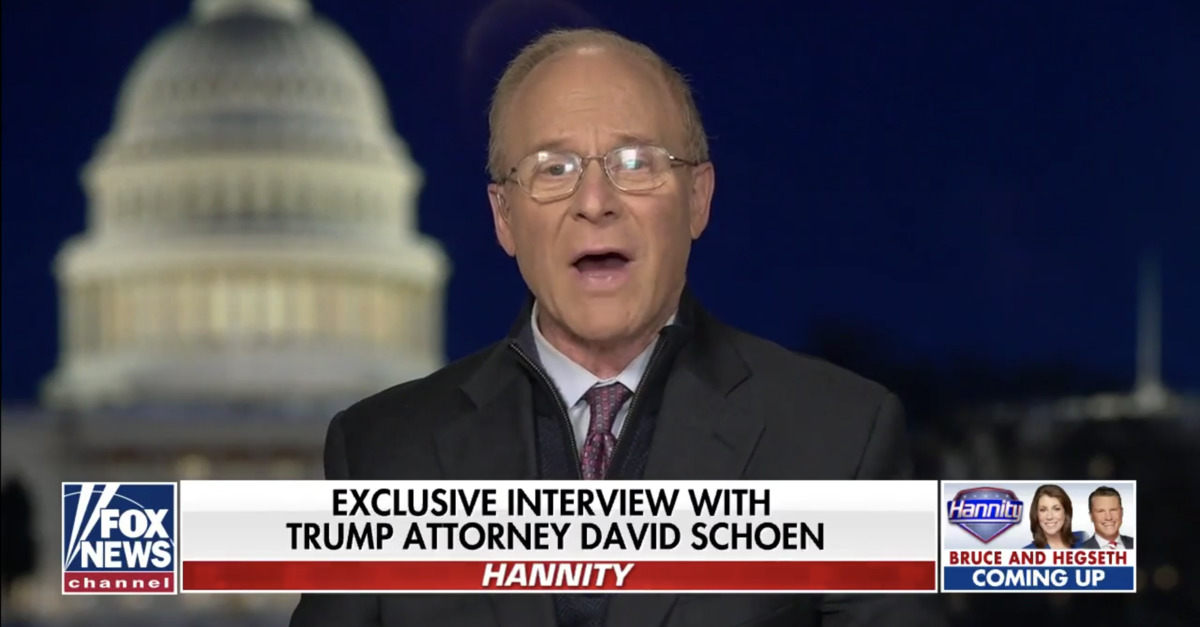 Former president Donald Trump’s defense attorney appears to have unintentionally endorsed the heart of the argument leveled against the 45th president by congressional Democrats. And that attorney, David Schoen, made the accidental case against his client during a Tuesday night appearance on a flagship Fox News prime time show.

Sean Hannity had the honor of exclusively interviewing the defense attorney during his eponymous program. The titular host previewed the segment by excoriating the Democratic Party’s second bite at the impeachment apple in as many years.

“[F]or two Februaries in a row, Democrats are conducting a show trial in the U.S. Senate to impeach and convict Donald J. Trump, who’s president-in-exile according to Jim Acosta,” Hannity said. “And while the first unsuccessful charade was pretty terrible, the sequel is even worse.”

The night’s episode featured the president’s oldest son, Donald Trump Jr., and Texas Sen. Ted Cruz, but Schoen was the main event. Hannity was among the few in media or politics to offer praise for the defense’s performance before the Senate earlier that day (a view that was not shared by members of the president’s own party.)

“The president’s attorney David Schoen had a great day, in my opinion, he will join us for an exclusive interview,” Hannity said at top of his show.

During the ensuing interview, Schoen was asked about a hypothetical impeachment inquiry focused on rhetoric employed by high-profile elected Democrats—including President Joe Biden.

“If we apply the Democratic standards for how they define incitement and insurrection,” Hannity asked before rattling off a laundry list of Democratic Party politicians. “If that same standard is applied, do they not all deserve impeachment, too?”

To which Schoen replied [emphasis added]:

Yeah, I would say, you know, listen, if they tried to impeach them, I would say that also is an abuse, was an abuse, of the impeachment process. But your point is: they’re using rhetoric that is just as inflammatory or more so. The problem is, they don’t really have followers, you know, they’re dedicated followers, and so, when they give their speeches.

Schoen’s words were immediately interpreted as helpful for Democrats.

Trump impeachment attorney David Schoen says that Democrats have used “rhetoric that is just as inflammatory or more so” than Trump but “the problem is, they don’t have followers, dedicated followers when they give speeches.” pic.twitter.com/w5O2rg4qRS

Attorneys and persistent critics of the 45th president seized on the statement as an implicit admission of culpability for incitement.

“Yeah Trump’s lawyer (Schoen) made a critical mistake on Fox last night, and admitted two major facts to prove causation (Trump used ‘inflammatory’ language and is unique in having ‘dedicated followers,'” tweeted CNN legal analyst and former FBI Special Agent Asha Rangappa. “Oops. You get what you don’t pay for, I guess.”

“‘Trump was only able to successfully incite his followers to engage in an armed insurrection because his followers ascribe to a cult of personality’ is … not a defense,” he said via Twitter.