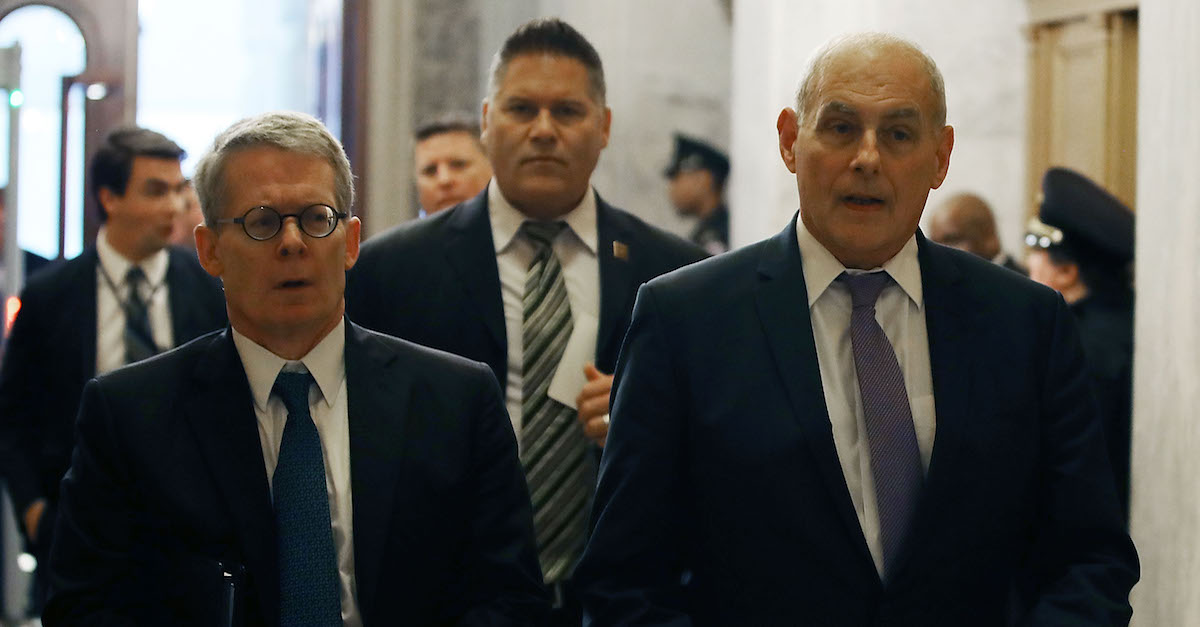 Flood pictured on the left

The letter Flood wrote, which you can read in full below, criticized Mueller for not accusing the president of a crime but not exonerating him either — among other things.

“I write on behalf of the Office of the President to memorialize concerns relating to the form of the Special Counsel’s Office Report and to address executive privilege issues associated with its release,” Flood began. “The SCO report suffers from an extraordinary legal defect: It quite deliberately failed to comply with the requirements of governing law.”

“Les the Report’s release be taken as a ‘precent’ or perceived as somehow legitimating the defect, I write with both the President and future Preisdents in mind to make the following points clear.”

Flood proceeded to argue that “conclusively determining that no criminal conduct occurred” was “not [his emphasis not ours] the SCO’s assigned task, because making conclusive determinations of innocence is never the task of the federal prosecutors.”

Instead, Flood argued, Mueller used an “inverted-proof-standard” and “‘exoneration’ statements can be understood only as political statements.”

Flood accused Mueller and his staff of “failing in their duty to act as prosecutors and only as prosecutors.” Flood derided Mueller’s report as “part ‘truth commision’ and part law school exam paper.”

Eventually, Flood said that Trump wanted three key points expressed: 1) Trump’s decision not to assert executive privilege was not a waiver of privilege; 2) there was no waiver executive-privileged portions of the report that were disclosed regarding Mueller’s “underlying investigative materials,” like “FBI Form 301 witness interview summaries and presumptively privileged documents made available” to Mueller; 3) Trump reserves the right to “instruct his advisors to appear before congressional committees to answer questions on the same subjects.”

In closing, Flood said that the “cloud” of “Russian collusion” over the presidency and the lack of mention about “improper disclosures by senior government officials with access to classified information” should “worry all civil libertarians, all supporters of investigative due process, and all believers in limited and effective government under the Constitution.”

When Ty Cobb, Trump’s former White House counsel for the Russia Probe, decided to retire, Flood was the next man up. This was notable since Flood was one of the lawyers who represented Bill Clinton during impeachment proceedings. Flood was also the top dog in the White House Counsel’s Office during George W. Bush’s second term as president.

According to Flood’s Williams & Connolly bio, the law firm where he was a partner, Flood has “represent[ed] individuals, corporations and professional services firms in complex white-collar matters, Congressional investigations, professional liability disputes, and other high-stakes litigation and crisis situations.”

Flood letter to Barr by on Scribd

[Image via by Mark Wilson/Getty Images]