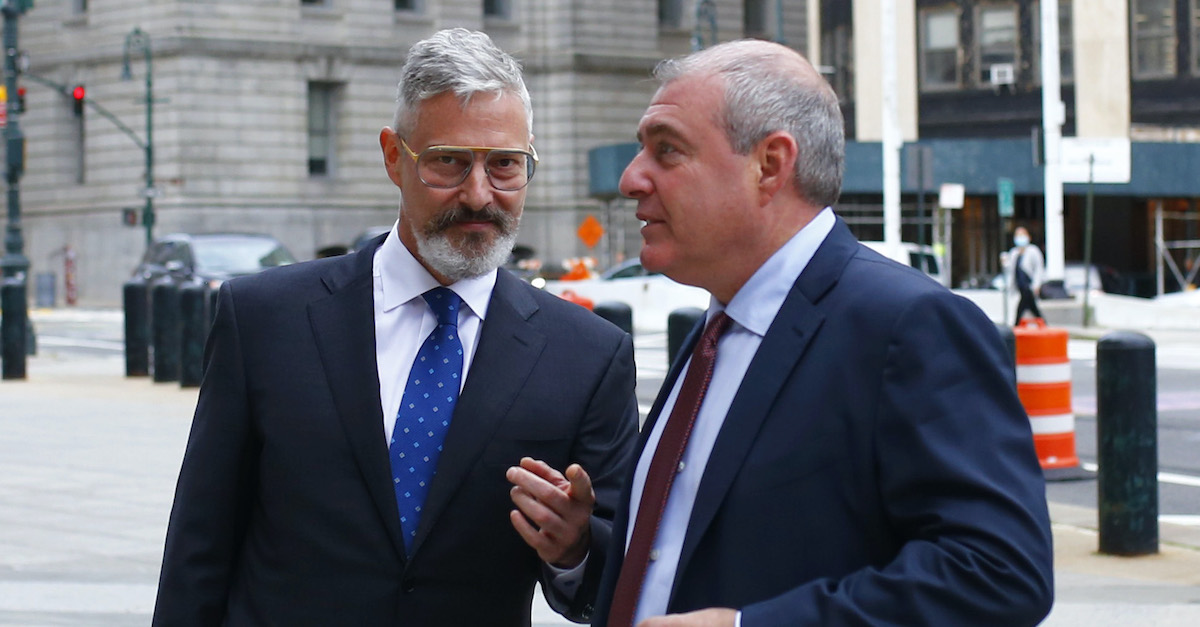 Former Rudy Giuliani associate Lev Parnas (right) stands next to his lawyer Joseph Bondy (left) before jury selection at his trial. Parnas, who has pleaded not guilty, is accused of concealing an illegal $325,000 donation to support former President Trump in his failed re-election bid in 2020.

Prosecutors, however, opened their case far away from that politically charged controversy, instead focusing a jury’s attention to a Russian investor’s alleged $1 million wire transfer to Parnas and his accused co-conspirator Andrey Kukushkin.

“The law requires that political contributions be made in the true donor’s name,” Assistant U.S. Attorney Aline Flodr noted. “Here, the defendants hid where that money came from.”

As previously reported, that Russian’s name was Andrey Muraviev, whom Parnas allegedly called “Big Andrey.” Prosecutors say that Parnas and Kukushkin secretly funneled that foreign money to donate to politicians who could help provide them with permits to run marijuana businesses.

On Sept. 10, Parnas’s accused co-conspirator Igor Fruman pleaded guilty to soliciting a contribution from a foreign national to advance a cannabis business. David Correia, another defendant from the initial indictment, pleaded guilty to two federal charges last October. One of them was for bilking investors in the company Fraud Guarantee, an alleged conspiracy with which Parnas is also charged.

Giuliani, who has not been charged with any wrongdoing, was reportedly paid $500,000 as the company’s consultant, according to Reuters.

Neither Fruman nor Correia will be cooperating with the government.

Parnas’s lawyer Joseph Bondy told the jury that his client is not guilty.

“He did not knowingly, he did not willfully violate any election laws,” Bondy said, referring to the indictment as simply allegations that can be thrown in the trash.

In the early stages of their prosecution, the case focused on Trump’s Ukraine scandal and the alleged plot of oust former U.S. Ambassador to Ukraine Marie Yovanovitch. Yovanovitch would later testify in Congress that Giuliani and a corrupt Ukrainian prosecutor worked together to smear her and push her out of office because of her anti-corruption efforts. The ambassador reportedly stood in the way of their alleged plot to dirty up Joe Biden, when the now-U.S. president was Trump’s most formidable election rival.

During the impeachment investigation, Parnas shared hundreds of files with the House Intelligence Committee, and photographs of him socializing with prominent Republicans began circulating. Bondy mentioned these ties during his opening statement, referring to “America’s Mayor” Giuliani, Rep. Pete Sessions (R-Texas), and Joseph Ahearn, a director in the pro-Trump super-PAC America First Action.

Unlike these Washington notables, Bondy argued, his client Parnas was a relatively unsophisticated actor.

“He’s not a diplomat,” Bondy said. “He hasn’t been to law school. He doesn’t work in government.”

A Ukrainian-born immigrant, Parnas grew up in Brooklyn and did not graduate high school before trading penny stocks. Bondy said that his client met Fruman in a Florida community of Soviet emigres. That meeting launched a long journey for Parnas, who attended a fundraiser in Mar-a-Lago on April 20, 2018.

A director for National Organization for the Reform of Marijuana Laws, Bondy repeatedly referred to that “4/20” meeting, using the slang for cannabis culture and the date of the annual celebration for its consumption. The lawyer noted that Parnas spoke to Trump and his son about marijuana legalization during an event later that month at the Trump International Hotel on April 30, a tape of which was leaked during the first impeachment scandal in 2020.

“There are two sides to this,” Bondy told the jury. “It is our side that will be more convincing to you.”

As he signaled in the final pre-trial hearing, Kukushkin’s lawyer Gerald Lefcourt depicted his client as a dupe of Parnas and Correia.

“They saw Mr. Kukushkin as a rube, inexperienced,” Lefcourt said, adding that they saw his client as a way to get to Muraviev.