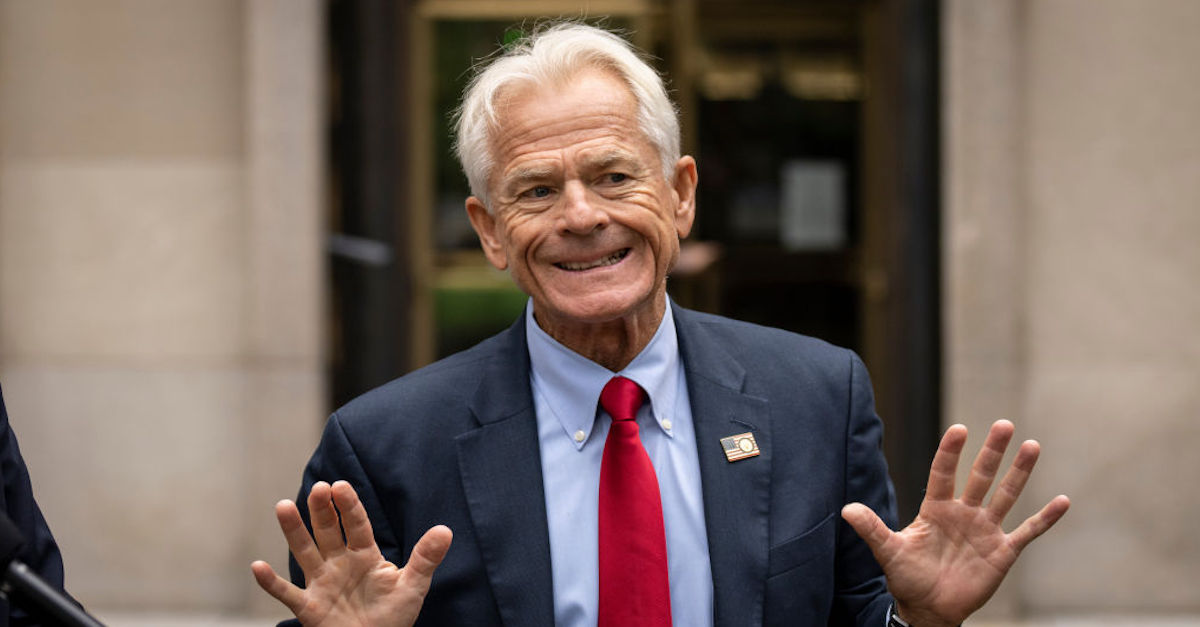 Former Trump White House Advisor Peter Navarro speaks to the press as he leaves federal court after a status hearing on August 11, 2022 in Washington, DC.

Lawyers for one-time Donald Trump trade adviser Peter Navarro argued that their client shouldn’t be facing contempt of Congress charges for refusing to cooperate with a subpoena from the House committee investigating the Jan. 6 attack on the U.S. Capitol, appearing before a federal judge less than two weeks before trial in the case is set to begin.

Navarro was arrested in June and charged with two counts of criminal contempt of Congress, a charge that recently resulted in a jail sentence for Trump’s ex-chief strategist Steve Bannon. According to federal prosecutors, Navarro refused to comply with a House subpoena requesting documents and testimony from Navarro regarding what the committee said were efforts by Trump and those in his inner circle to block certification of Joe Biden’s electoral win.

Navarro has insisted that he believed that he was bound by executive privilege and could not cooperate with the subpoena. His attorneys argued Friday that the charges against him should be dismissed.

U.S. District Judge Amit Mehta told Navarro’s attorney Stanley Woodward that it wasn’t entirely clear that Trump actually invoked executive privilege as to Navarro and the subpoena, but Woodward said that it was clear to his client from his communications with the former president that he was indeed asserting the privilege.

“You haven’t given me any evidence at this point,” Mehta said. “All you’ve given me is a single statement … there’s nothing else on the record.”

“We do reference the Grand Jury testimony,” Woodward said, referring to the presentation of evidence that preceded Navarro’s arrest. “It is independent corroboration of Dr. Navarro’s mental state and his reasonable belief that he had been instructed [to assert the privilege].”

Mehta replied that that is a “mens rea” issue — meaning that it goes to whether Navarro had the necessary state of mind in order to be convicted of a crime.

Woodward also indicated that Trump had told Navarro privately that he should assert executive privilege. Mehta expressed hesitation that he could rely on Woodward’s representation alone, without further evidence.

“I’m asking for anything,” the judge said. “You don’t even tell me that he whispered in his ear.”

“Respectfully, I have said that they had a conversation,” Woodward replied. “I can represent to the court that as a result of that conversation, Dr. Navarro understood that he was supposed to invoke the privilege.”

Mehta recently shut down Navarro’s attempt to pursue a “selective prosecution” defense, telling the defendant that he had failed to make a “colorable” claim that he had been wrongfully targeted.

Woodward is currently before Mehta in another high-profile case involving deeply devoted Trump supporters: he is defending Kelly Meggs in the Jan. 6 seditious conspiracy case against the right-wing Oath Keepers anti-government group.

Mehta didn’t issue a ruling on Friday, nor did he rule on a pretrial motion from the government regarding various defenses and arguments that Navarro may raise at trial. It was not immediately clear whether Mehta would rule ahead of a pretrial conference scheduled for Wednesday, but toward the end of the hearing he said he was hopeful the trial would move forward as scheduled.

“Maybe I’m being overly optimistic, but I think there’s a chance we can start this case on the 16th,” the judge said, adding that he expected a relatively short trial duration.