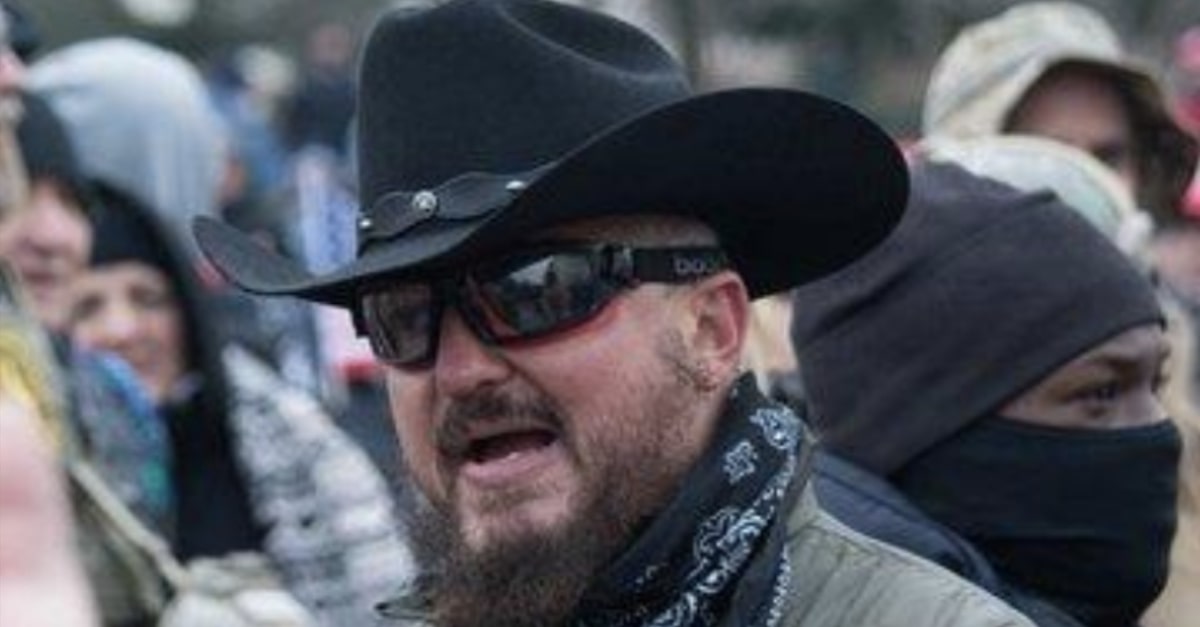 Stewart Rhodes outside the U.S. Capitol on Jan. 6. (Photo via DOJ)

Expounding upon his brand of 2020 election denial, Oath Keepers founder Stewart Rhodes told a federal jury in his long-anticipated testimony on Friday that President Joe Biden didn’t win the presidential race — but Donald Trump didn’t, either.

“That would mean that Donald Trump too was not the winner,” Rhodes added.

In the wake of the COVID-19 pandemic, most U.S. states changed their election rules to make voting more accessible amid lockdowns and social distancing. Rhodes claims any changes to the rules were invalid, and he criticized the focus on election machines, a target of much pro-Trump suspicion. The theory expounded by Rhodes to a federal jury was roundly rejected by state and federal courts, including in his native Texas.

As he took the witness stand at his historic trial on Friday, Rhodes tried to endear himself to a jury in deep-blue Washington, D.C., where the panel is being asked to decide whether he engaged in a seditious conspiracy to overthrow the government or the execution of its laws. He appeared to fight back tears as he reflected upon the Sept. 11th attacks and the suicide rates among U.S. military veterans.

“Of course, after the grief came the anger,” Rhodes said, referring to the attacks on the World Trade Center and the Pentagon.

The Oath Keepers caters to former military and law enforcement personnel, and Rhodes depicted it as a way to give veterans a purpose through actions like hurricane relief. He told a jury that he used his military experience to train women and “LGBTQ youth groups” in self-defense. One of the Oath Keepers members standing trial, Jessica Watkins, is a transgender woman whose fiancé Montana Siniff was the defense’s first witness.

Asked about the founding of his group in 2009, Rhodes claimed to draw a link between its founding and the Supreme Court’s validation of military commissions through the U.S. government’s designation of “enemy combatants.”

“I think the Supreme Court made a serious error — almost as bad as Korematsu,” said the Yale Law-educated Rhodes, referring to the notorious and since-overturned ruling upholding Japanese internment.

The Supreme Court ruling that permitted the government to designate U.S. citizens as enemy combatants — but afforded them certain due process rights — was Hamdi v. Rumsfeld. It was issued in 2004, five years before the founding of the Oath Keepers.

Extremism watchdogs note that the chronology of the group’s founding coincided with a much more significant historical event: Barack Obama became the nation’s first Black president that year.

Rejecting characterizations of the Oath Keepers as racist and extremist, Rhodes painted a starkly different portrait of himself — as a patriot, a nonpartisan, and a supporter of the U.S. Constitution and the right to protest. In his fervor to depict himself as a friend to demonstrators, he said at one point, “I support the right to riot,” before correcting himself to say “protest.” He addressed the jury directly from time to time, and he started his testimony with a light dig at his birth name.

“My name is Elmer Stewart Rhodes III, but I go with Stewart, middle name, for obvious reasons,” he said of his first name, which is often associated with glue and Bugs Bunny’s cartoon enemy.

Rhodes has every reason to try to show a Washington, D.C., jury his softer side.

For 21 days of trial proceedings spread over the course of six weeks, a federal jury has seen Rhodes organize Oath Keepers members nationally to gather to the Washington, D.C. area before Jan. 6th. Prosecutors showed them his receipts from the thousands of dollars that he spend on firearms, military gear and components. Surveillance footage showed those weapons being stashed in Alexandria, Va., where the state’s permissive gun laws allowed the Oath Keepers to have a so-called quick reaction force station there. Communications among the leaders and members showed that group considered deploying to Washington, D.C., if former President Donald Trump invoked the Insurrection Act.