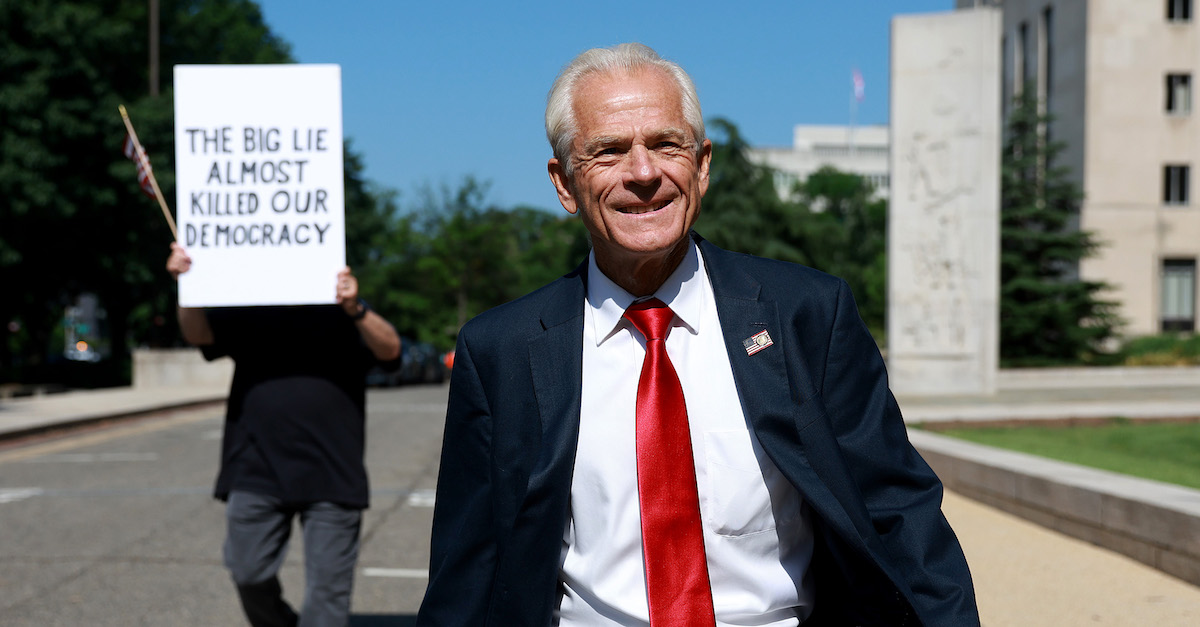 Donald Trump‘s former trade advisor Peter Navarro has officially pleaded not guilty to contempt of Congress after publicly criticizing prosecutors in the days since his arrest.

Navarro was arrested on June 3 in connection with his refusal to cooperate with document and testimony requests from the House committee investigating the Jan. 6 attack on the U.S. Capitol.

“[W]e believe that you have documents and information that are relevant to the Select Committee’s investigation,” the committee’s February subpoena said. “For example, you, then a White House trade advisor, reportedly worked with Steve Bannon and others to develop and implement a plan to delay Congress’s certification of, and ultimately change the outcome of, the November 2020 presidential election.”

Anger over the 2020 election results, fueled by claims from Trump and his allies that Joe Biden‘s win was the result of fraud, led scores of Trump supporters to descend on the Capitol on Jan. 6. Rioters overwhelmed police and breached the building at multiple entry points, causing Congress to temporarily halt its certification of the Electoral College votes and forcing lawmakers to either evacuate the building or shelter in place.

At his initial court appearance, Navarro accused federal law enforcement of “prosecutorial misconduct,” saying that he wasn’t allowed to make a phone call and that he was isolated in a jail cell.

In another flair of hyperbole, he has since called the agents who arrested him “kind Nazis.”

At his first appearance on the contempt charges, Navarro insisted that he was not going to hire any attorneys.

“I don’t want to spend my entire savings on lawyers,” Navarro said at the time.

However, it appeared that Navarro did ultimately retain representation, as attorneys John Rowley and John Irving filed appearances on his behalf on Thursday.

As Law&Crime previously reported, Navarro had told U.S. Magistrate Judge Zia Faruqui at his initial appearance that the contempt charges couldn’t be heard until a civil suit launched by Navarro was settled.  That civil matter raised issues of executive privilege and testimonial immunity.

“I want this arraignment postponed until that civil suit is allowed to go forward and I at least have a judge hear my prayer for relief and decide whether these people should be enjoined from doing exactly what they did today,” Navarro said at the time.

“We filed motion to dismiss [the] civil case yesterday,” Irving said, adding that the lawyers sought to dismiss the case without prejudice, an indication that Navarro’s legal team may consider re-filing the case in the future.

That motion to dismiss noted that the defendants — including House Speaker Nancy Pelosi (D-Calif.) and Jan. 6 committee Chair Bennie Thompson (D-Miss.) — “have not yet been served with the Complaint.”

Mehta, a Barack Obama appointee, assured Navarro that the claims he raised in his civil case would be addressed in the criminal case.

“Mr. Navarro, the issues you raised in the civil complaint, they can all be litigated here,” Mehta, a Barack Obama appointee, told Navarro, referring specifically to Navarro’s allegations challenging the validity of the House committee and its legislative purpose. “We don’t need to have a civil case resolve all of that before this case proceeds.”

Mehta set Navarro’s trial for November, although Navarro’s legal team made it clear they wanted to delay that date.

“Mr. Rowley and I just got retained yesterday,” Irving told Mehta, before asking the judge not to set a trial date. “There are a lot of novel constitutional issues here,” Irving added, noting that he and Rowley were aware of recent developments in the contempt charges against Bannon, another Trump advisor, whose motion to dismiss was denied Wednesday.

Irving also said that Navarro may have obligations taking him out of D.C. later this year.

“Mr. Navarro has a book that’s coming out the latter part of the year,” Irving said. “[There is] going to be a time where he’s going to be on the road a lot, trying to promote that book, which is important to him in terms of income and whatnot. It’s not a trivial thing.”

Prosecutors, however, had indicated that they were prepared to go to trial at the earliest possible date, and told Mehta that the case isn’t complicated and doesn’t require an extended period of discovery.

Prosecutors also said that a book tour is not a legitimate reason to delay trial.

In the end, Mehta — noting the need to consider the public’s interest in the case moving forward and his own busy trial schedule — set a trial date of Nov. 17.