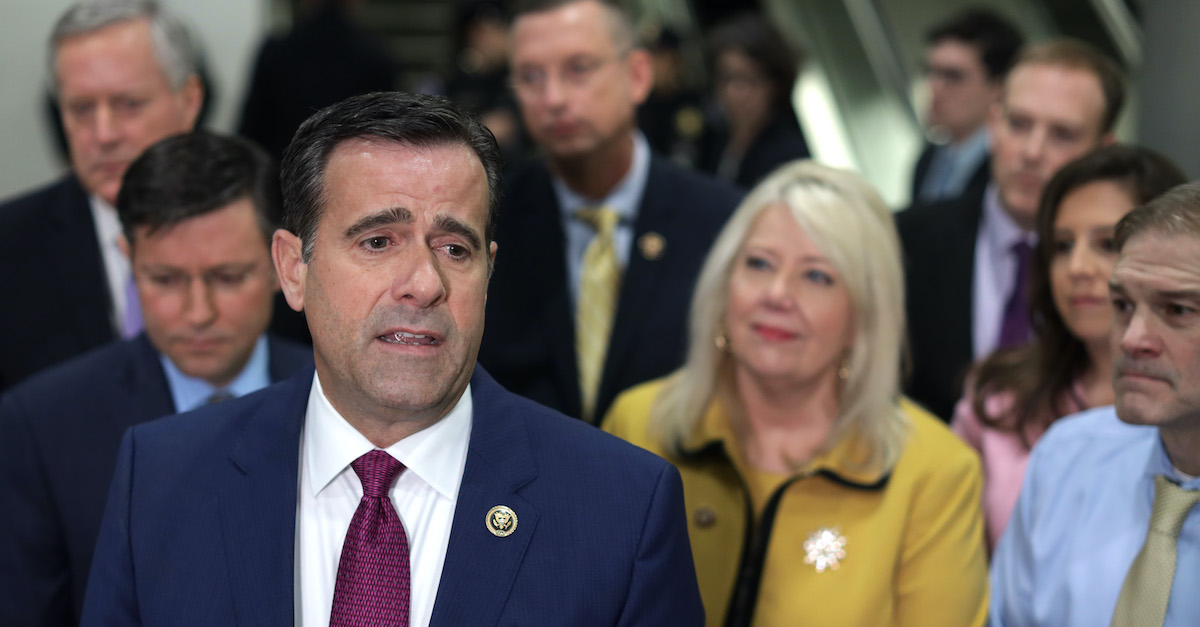 Some of us are old enough to remember when Rep. John Ratcliffe (R-Texas) staunchly defended President Donald Trump by grilling Robert Mueller in public last year, only to end up being considered for Director of National Intelligence (DNI) role shortly thereafter. But Ratcliffe had a résumé problem, so Trump ditched the idea and installed Joseph Maguire in an acting DNI role.

With Maguire now out and Trump hotel gold-level member Richard Grenell temporarily replacing Maguire, it was reported on Tuesday that Ratcliffe is once again under consideration for the permanent DNI position.

New: Trump is revisiting Rep. John Ratcliffe as one of the candidates he is considering to be permanent Director of National Intelligence, sources tell CNN @mkraju & me. Ratcliffe was Trump’s DNI pick last year, but withdrew after questions about his resume & qualifications.

Another name floated by CNN was U.S. ambassador to the Netherlands Pete Hoekstra. Discussions are said be in “preliminary” stages. Importantly, Trump is looking for loyalists to fill all key roles. Ratcliffe certainly fits that bill.

RELATED: Trump May Nominate Someone ‘Unconfirmable’ as DNI in Order to Keep Partisan Loyalist in Acting Role

Ratcliffe, a former federal prosecutor, was initially nominated to be DNI just days after he grilled former Special Counsel Mueller at a hearing before the House Judiciary Committee.

Ratcliffe asked Mueller what “DOJ principle or policy sets forth a legal standard that an investigated person is not exonerated if their innocence from criminal conduct is not conclusively determined?” Mueller began to respond, saying that “this is a unique situation.” Ratcliffe cut him off.

Ratcliffe has also called the Ukraine whistleblower a liar. “[The whistleblower] thought no one would ever be able to prove because what president would take the unprecedented step of releasing a transcript with a foreign leader,” Ratcliffe said, adding that this was “something that the whistleblower never expected.”

Indeed, if Ratcliffe’s nomination had gone through, it would have been his job to withhold the whistleblower complaint from Congress. That’s what Maguire ended up doing.

Intelligence Community Inspector General Michael Atkinson received the complaint on Aug. 12. Maguire later confirmed that the whistleblower followed all of the legal procedures required to file such a complaint before eventually authorizing its release. The complaint did not go public until Sept. 26.

In the initial complaint, which has been repeatedly corroborated by the testimonies of current and former White House officials, the whistleblower stated that they had “received information from multiple U.S. Government officials that the President of the United States is using the power of his office to solicit interference from a foreign country in the 2020 U.S. election.”

But Ratcliffe was never actually in the position of having to make a decision about the complaint. The president pulled the nomination, saying Ratcliffe was being slandered and libeled by the media.

Trump’s Aug. 2 tweets on the subject:

Our great Republican Congressman John Ratcliffe is being treated very unfairly by the LameStream Media. Rather than going through months of slander and libel, I explained to John how miserable it would be for him and his family to deal with these people. John has therefore decided to stay in Congress where he has done such an outstanding job representing the people of Texas, and our Country. I will be announcing my nomination for DNI shortly.

The so-called “libel” and “slander” the president referred to were news reports about Ratcliffe seemingly misrepresenting his role in “an anti-terrorism case that he’s repeatedly cited among his credentials related to national security issues.”

Worth noting: Ratcliffe still has not corrected his House bio. pic.twitter.com/vTROF8anqn

Trump later suggested that the media scrutiny of Ratcliffe wasn’t actually a bad thing. After the initial round of reporting, others came forward to say that Ratcliffe touted his appointment to a role that “doesn’t exist.”

In response to accusations that Ratcliffe misrepresented his professional experience, a Ratcliffe spokeswoman told CNN that Justice Department records would “confirm that as both Chief of Anti-Terrorism and National Security for the Eastern District of Texas from 2004-2008, John Ratcliffe opened, managed and supervised numerous domestic and international terrorism related cases.”

The only "terrorism" case to which Ratcliffe was assigned that resulted in a conviction was the prosecution of Kenneth Kanyayi, who was accused of using someone else's Social Security number to gain employment. pic.twitter.com/D209vZAAUw