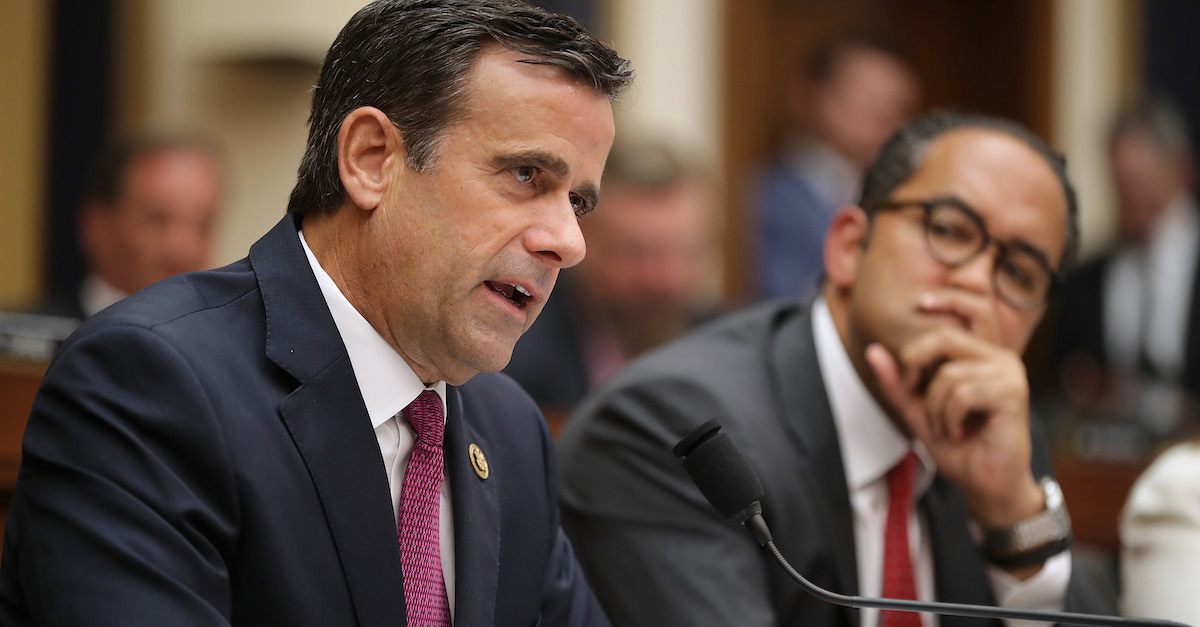 Rep. John Ratcliffe (R-Texas), President Donald Trump’s pick to replace Dan Coats as the Director of National Intelligence (DNI), has not had a great week. Reports first surfaced Tuesday alleging that the Texas Republican may have “misrepresented his role in an anti-terrorism case that he’s repeatedly cited among his credentials related to national security issues.” Now, a former director of the National Security Council (NSC), has jumped into the fray to say that one of Ratcliffe’s most impressive-sounding national security roles “doesn’t exist.”

Katrina Mulligan, who worked as an attorney advisor and director for preparedness and response in the National Security Division at the DOJ and “served in several roles within the office of the director of national intelligence,” unloaded Thursday on Ratcliffe. Mulligan currently works at the progressive nonprofit, the Center for American Progress, as managing director for National Security and International Policy. In a series of tweets, Mulligan said that Ratcliffe’s claimed role as the “Chief of Anti-Terrorism and National Security in the Eastern District of Texas” does not exist.

“Ratcliffe also claims he was appointed—by President Bush! —as ‘chief of anti-terrorism and national security in the Eastern District of Texas.’ DOJ formers (myself included) scratched our heads when we saw that. Because that role doesn’t exist,” Mulligan said.

In response to accusations that Ratcliffe misrepresented his professional experience, a Ratcliffe spokeswoman told CNN Thursday that Justice Department records would “confirm that as both Chief of Anti-Terrorism and National Security for the Eastern District of Texas from 2004-2008, John Ratcliffe opened, managed and supervised numerous domestic and international terrorism related cases.”

Mulligan then spoke about the position she believed Ratcliffe was referring to.

“Ratcliffe is presumably referring to the Anti-Terrorism Advisory Council (ATAC) Coordinator, a role that is nowhere near as significant as Ratcliffe has represented. After 9/11, the AG issued a directive that tasked each US Attorney with coordinating an ATAC within their district. Each office was also required to designate an ATAC coordinator—typically a line prosecutor—to ensure certain largely administrative responsibilities were completed,” Mulligan said. “It’s not a presidential appointment as Ratcliffe’s campaign website implies. It’s a bureaucratic duty you are assigned by your supervisor (not the President of the United States).”

Mulligan discussed what would likely be expected of an ATAC coordinator in Ratcliffe’s district.

“They convene a meeting with the FBI field office a couple times a year to understand whether any terrorism investigations are underway. They also ensure connectivity back to the National Security Division if certain terrorism charges are being considered (uncommon in the Eastern District of Texas),” Mulligan wrote. “ATAC Coordinator is largely an administrative role.  In many jurisdictions, it’s a role line attorneys assume in addition to other roles – an ‘other duty as assigned. In some jurisdictions it can be more substantive, but in the Eastern District of Texas, in 2004-2007, it wasn’t.”