Trump Releases Another Zelensky Memo, This One Benign. Witnesses Said Putin, Orban Poisoned the Well Shortly After the Call.

As Friday’s public impeachment hearings began, the White House released another not-verbatim memo of a phone call between President Donald Trump and Ukrainian President Volodymyr Zelensky. This one was made from Air Force One and dates back to April 21, just after Zelensky won the election. The memo shows Trump saying “When you’re settled in and ready, I’d like to invite you to the White House. We’ll have a lot of things to talk about, but we’re with you all the way.” This is notable because there was no overt precondition for a meeting between the heads of state, and there was no mention of the Bidens or investigations.

The problem is that witnesses in the impeachment inquiry have said that Trump’s positive attitude towards Ukraine quickly turned negative weeks later, and they surmised conversations Trump had with two world leaders — Russian President Vladimir Putin and Hungary’s authoritarian prime minister Viktor Orban — played a role in the shift. Trump and Putin talked on the phone on May 3, while Orban visited the White House on May 13.

State Department official George Kent said in testimony behind closed doors that he took notes of a conversation in mid-May he had with Dr. Fiona Hill. Hill, another impeachment witness, is a former National Security Council senior director for European and Russian affairs. Kent said they spoke about a “change of attitude and approach towards Ukraine.” Kent said that shift came “in the wake of meetings that President Trump had, a meeting with Viktor Orban, the leader of Hungary, as well as a call he had with Russian President Putin in early May.” 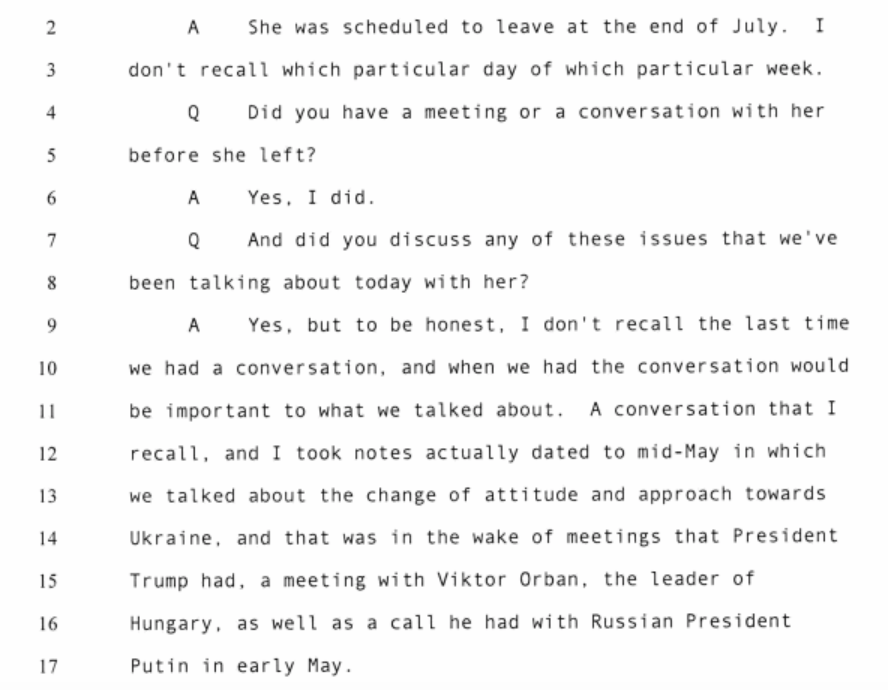 Kent was asked what changed following those conversations.

“Fiona assessed the conversations as being similar in tone and approach. And both leaders, both Putin and Orban, extensively talked Ukraine down, said it was corrupt, said Zelenskyy was in the thrall of oligarchs, specifically mentioning this one oligarch Kolomoisky, negatively shaping a picture of Ukraine, and even President Zelenskyy personally,” Kent said.

Kent was asked if he remembered Hill saying this affected Trump’s outlook on Ukraine. He said he couldn’t recall “what she said in that meeting besides giving me the brief readouts of those two meetings, ” but Kent did say “that was [his] takeaway.” He also it was his takeaway that Putin, Orban and Rudy Giuliani shaped Trump’s negative view of Ukraine.

“[A]nd that those two world leaders, along with former Mayor Giuliani, their communications with President Trump shaped the President’s view Ukraine and Zelenskyy, and would account for the change from a very positive first call on April 21 to his negative assessment of Ukraine when he had the meeting in the Oval Office on May 23,” Kent said. 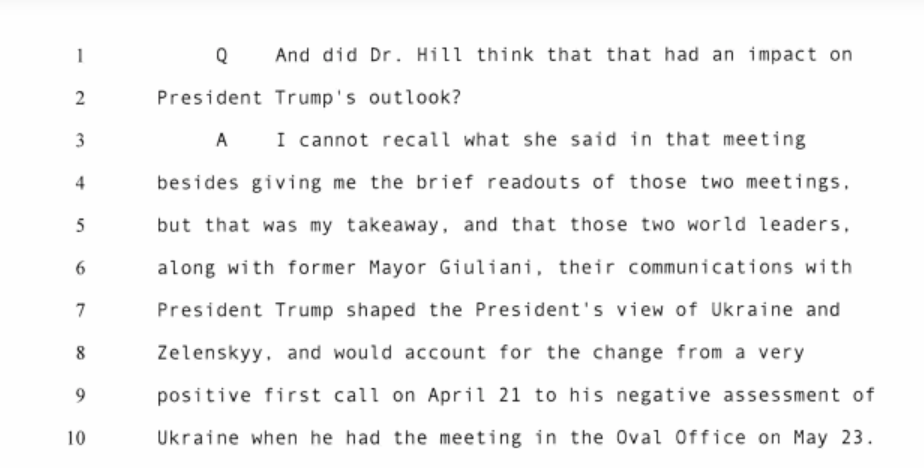 In short, Kent said it was his view that Trump’s conversations with Orban and Putin, and the influence of Giuliani, shifted Trump’s view on Ukraine from positive to negative in less than a month’s time.

Kent also said that the negative outlook was not shared by U.S. Ambassador to the EU Gordon Sondland, outgoing Energy Secretary Rick Perry and former U.S. Special Envoy Kurt Volker when they returned from Zelensky’s inauguration. 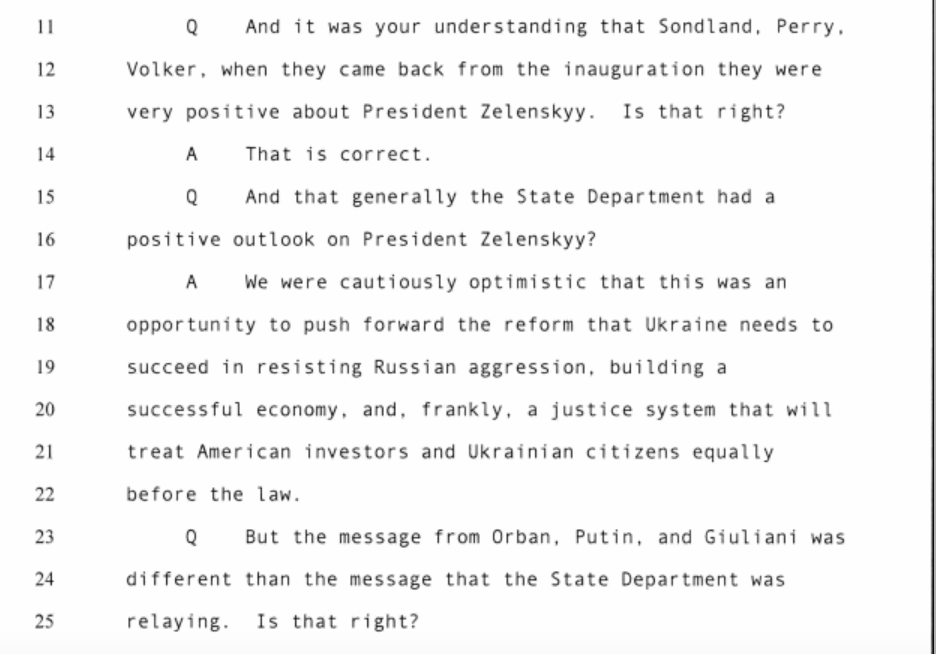 “We were cautiously optimistic that this was an opportunity to push forward the reform that Ukraine needs to succeed in resisting Russian aggression, building a successful economy, and, frankly, a justice system that will treat American investors and Ukrainian citizens equally before the law,” Kent said of the State Department’s hopes for a fresh start in Ukraine. 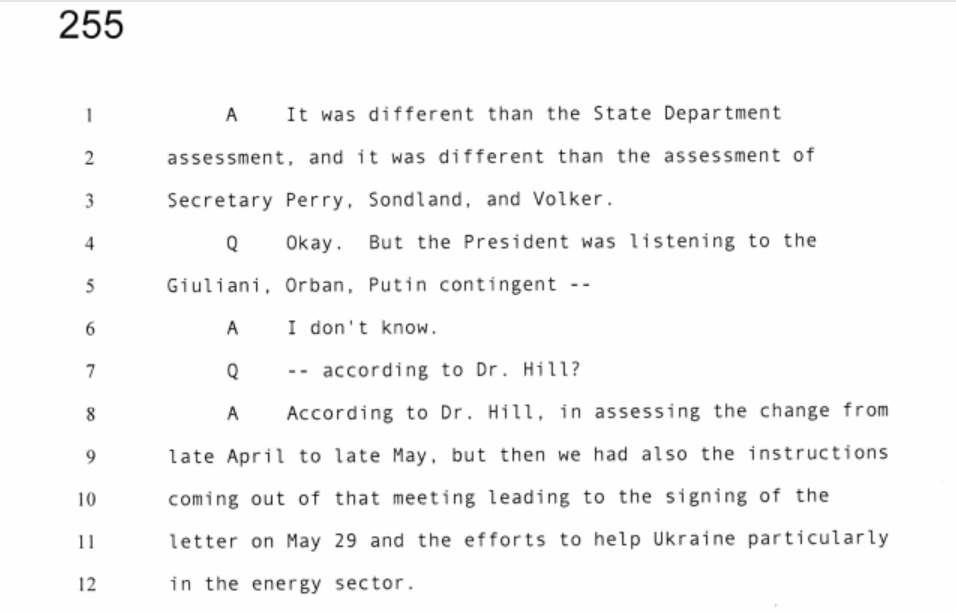 The bottom line of Kent’s testimony on this subject:

Kent, whose portfolio includes several former Soviet Union countries, said Putin’s motivation for turning Trump against Ukraine was “very clear.” Putin denies Ukraine’s sovereign existence and wants it to fail as an independent nation. He said Orban’s view derives from his vision of a “Greater Hungary,” including some 130,000 ethnic Hungarians who Kent said live in Ukraine.

““I would say that that’s Putin’s position,” Kent said. “I think Orban is just happy to jam Ukraine.

But Kent was not the only witness to testify about this matter. Lt. Col. Alexander Vindman was also asked questions about Putin and Orban.

Vindman, who was one of the NSC officials who heard Trump’s July 25 call with Zelensky (in which Trump asked for investigations in the Bidens and the CrowdStrike conspiracy), was asked if he recalled a discussion of Ukraine between Trump and Putin.

Vindman said he didn’t recall a discussion between Trump and Putin on Ukraine, but did say he was aware of the Trump-Orban meeting and got a readout of it. 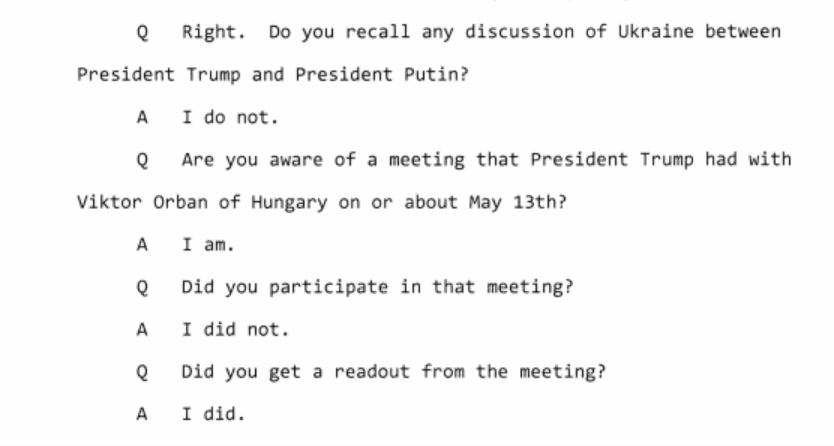 Vindman said Orban’s negative “and troubling” criticism was in direct contradiction to “all” other accounts of Zelensky from “representatives of foreign capitals”:

So President Viktor Orban has on multiple occasions publicly criticized Ukraine for everything from a — criticizing him for corruption to, frankly, probably the more relevant issue, the fact that the Ukrainians, under the previous President, President Poroshenko, had moved in a direction of strengthening Ukrainian nationality but also by doing that through mandating use of Ukrainian language. And there are a number of minorities in Ukraine, and President Orban believed that these — the language policies were not friendly towards the minorities. So he was highly critical about that. And what I, I guess, found, you know interesting and troubling about President Orban is, at this point, President Zelensky had had a number of positive interactive with world leaders. You know, again, in my role as a coordinating interagency policy, I get reports from colleagues from foreign — representatives of foreign capitals telling me about the interactions they had. And in all cases, they were positive. And, frankly, Viktor Orban’s was in great contrast to that.

When asked if he believed Orban’s conversation shaped Trump’s negative outlook on Ukraine, Vindman said that would be speculative on his part. But he did say former Trump National Security Adviser John Bolton opposed the meeting with Orban because “the kind of information that President Orban was communicating was not just inaccurate, but it also would undermine efforts to organize our national security policy in a more constructive manner […] Toward Ukraine.” 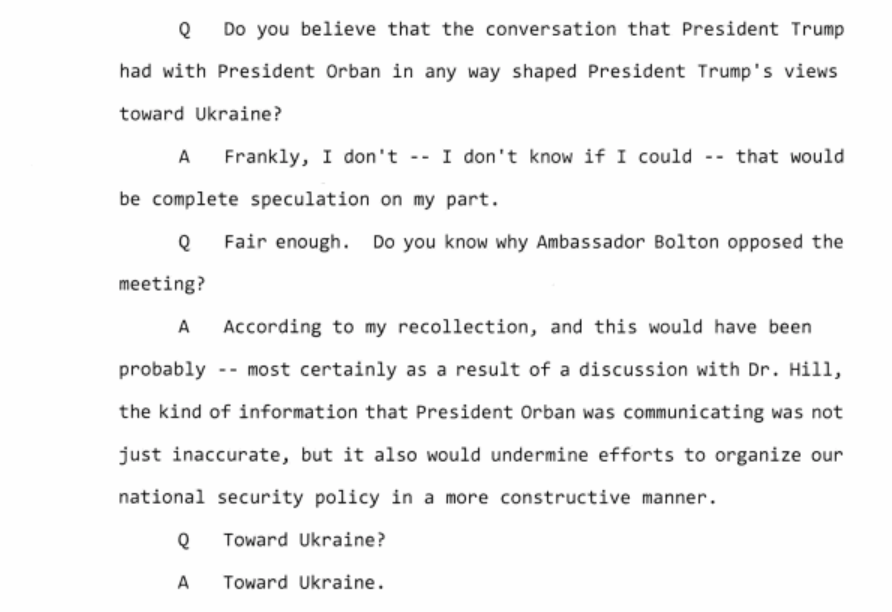