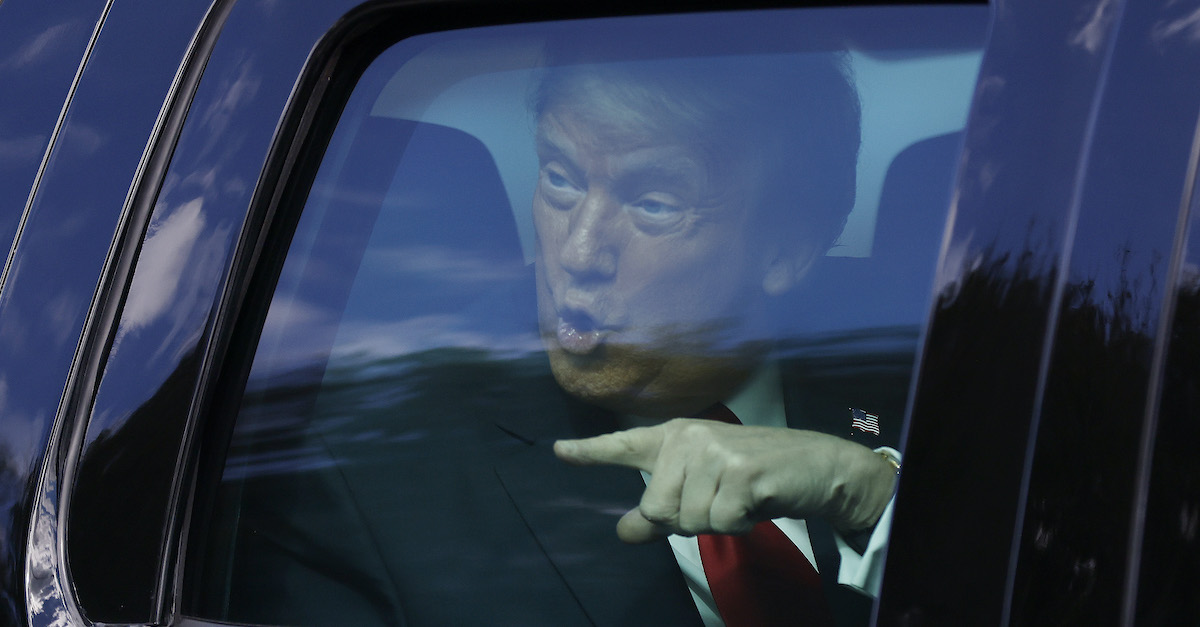 Then-president Donald Trump waves to supporters lined along on the route to his Mar-a-Lago estate on January 20, 2021 in West Palm Beach, Florida.

Former president Donald Trump is now the president of Mar-a-Lago, the Palm Beach, Florida-area resort that was famously used as the “Winter White House” for several weeks during his tumultuous, one-term presidency. And the move is an apparent bid to upend longstanding legal threats made by his would-be neighbors.

Citizens for Responsibility and Ethics in Washington (CREW) obtained a copy of Jan. 25, 2021 filing with the Florida Secretary of State which names the 45th president of the United States as the new president of Mar-a-Lago Club, LLC, the corporate entity that controls and operates Trump’s palatial, palm-tree-lined recreational estate.

“It appears that he only registered as the president of Mar-a-Lago—and nowhere else—in order live there, getting around an agreement he made with Palm Beach,” the watchdog group alleged via Twitter.

Trump actually moved into Mar-a-Lago on Jan. 20, the day he left the White House. But many of the surrounding landowners have been trying to keep him from staying there for quite some time.

As Law&Crime previously reported, several homeowners took legal action late last year by delivering a demand letter to the Palm Beach Town Council and the U.S. Secret Service registering their opposition. Specifically, the disgruntled homeowners said, they expected local authorities to enforce the terms of a 1993 agreement which transformed Mar-a-Lago from a single-family residence into a private club owned and operated by the Trump Organization.

“Palm Beach has many lovely estates for sale, and we are confident President Trump will find one which meets his needs,” the concerned citizens’ attorney Reginald Stambaugh told the press at the time.

Trump, of course, created facts on the ground by actually living there immediately after leaving office and has consistently dismissed his neighbors’ legal complaints through counsel. He may just win out.

Palm Beach town attorney John C. Randolph said the 1993 agreement was drafted in a way so that it doesn’t actually speak to the discrete issues raised by the neighbors’ complaints and should be no bar to the former president living on his own property.

While Trump explicitly promised Palm Beach residents he would not ever live at Mar-a-Lago at the time the 1993 agreement was made, again via counsel, that promise and the legal document outlining the deal with the town is apparently dead-letter.

“[The agreement] did not incorporate a direct prohibition on former President Trump residing at the club, the language in the agreement pertaining only to the members’ use of guest suites,” Randolph wrote in a memorandum to the town council.

The only real rules governing who can live permanently at Mar-a-Lago would be local zoning laws which prohibit “living quarters within a club except for its bona fide employees,” Randolph noted, citing the town code in the Jan. 29 memo.

Palm Beach’s definition of “employee,” the city attorney noted, includes “any person generally working onsite for the establishment and includes sole proprietors, partners, limited partners, corporate officers and the like.” That would encapsulate Trump.

“lf he is a bona fide employee of the club, absent a specific restriction prohibiting former President Trump from residing at the club, it appears the zoning code permits him to reside at the club,” Randolph wrote.

“He’s the like the mayor of Mar-a-Lago, if you will,” Trump’s attorney John Marion told the council during the Zoom hearing. “He loves it there.”