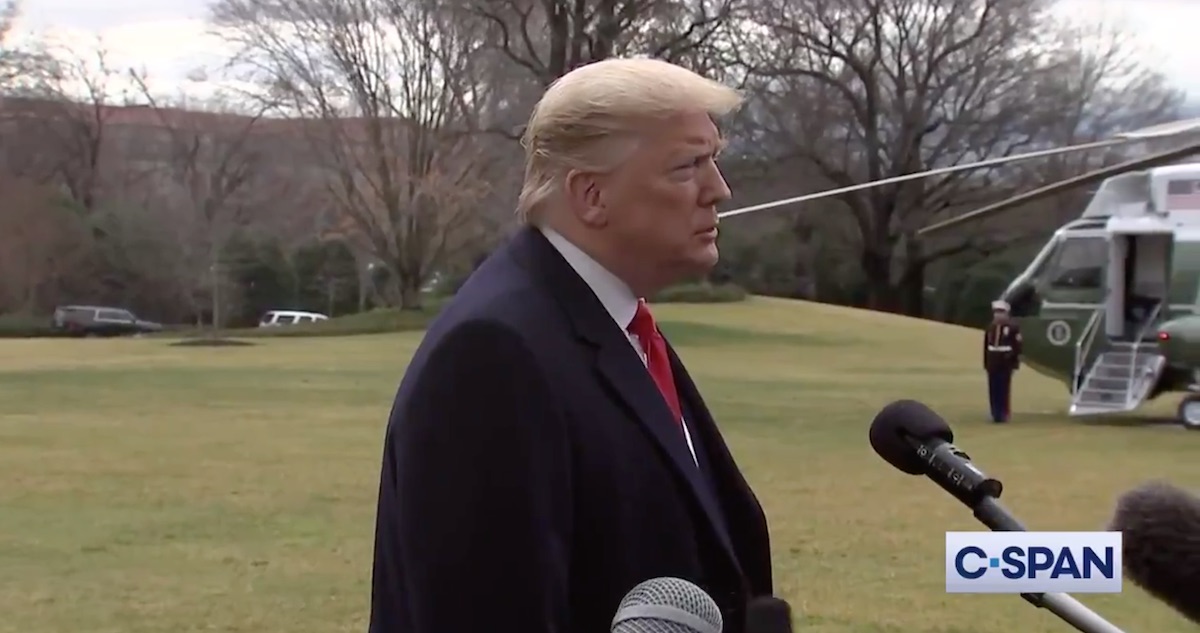 You tore the State of the Union address in half. Go directly to jail.

President Donald Trump on Friday said that Speaker of the House Nancy Pelosi (D-Calif.) broke the law when she petulantly tore up his speech, repeating an argument that not even his current favorite law professor endorses.

President Trump: "I thought it was a terrible thing when she ripped up the speech. First of all, it's an official document. You're not allowed. It's illegal what she did. She broke the law." pic.twitter.com/Co1j7ljpGU

“I thought it was a terrible thing when she ripped up the speech. First of all, it’s an official document. You’re not allowed. It’s illegal what she did. She broke the law,” Trump told reporters on Friday.

Leaving aside the fact that government employees have actually had to tape together documents that President Trump has torn up, in an effort to prevent him from violating the law, George Washington University Law Professor Jonathan Turley has already written at length about the Pelosi speech-tearing incident and concluded she didn’t break the law.

This is notable for a few reasons: 1) Turley was Republicans’ lone expert witness in the House phase of the impeachment inquiry and the only witness to say the case against the president was weak; 2) President Trump praised Turley as recently as Wednesday for slamming Pelosi and Democrats in general; 3) Turley was mad enough about Pelosi’s deed that he said she should resign as Speaker; 4) despite all of that, this very same law professor concluded, “No, Nancy Pelosi Did Not Violate Federal Law . . . Just Decades Of Tradition”:

As I have discussed, the conduct of House Speaker Nancy Pelosi, D-Calif., during the State of the Union was reprehensible and she should either promise to comply with the traditions of the House or step down as speaker. She committed three major transgressions against those traditions in changing the greeting to the President, making critical faces behind the back of the President during the address, and then ripping up the address while still in the Speaker’s chair. That last act has led some to allege that she also violated 18 U.S.C. §2071 in the destruction of an official document. That claim is dubious and should not take away from the more serious question of Pelosi violating her duty to remain a neutral representative of the whole house and not just a partisan member or worse a political troll.

Take it away, Prof. Turley:

We know that subsection (b) does not apply to Pelosi as a custodian but this provision also refers to something being “filed or deposited.” This is a courtesy copy that is not filed or deposited with the House. Judging from the fact that I could not find evidence that these copies were archived with the House, I assume that past Speakers have kept the copies as personal property. While years ago I wrote an academic study of such records and criticized the view of presidential papers as personal property, a court would likely view this document as the personal property of Pelosi.

Turley, in short: it was Pelosi’s personal copy of the speech and thereby her property.

Rep. Matt Gaetz (R-Fla.) filed an ethics complaint against Pelosi and requested a criminal referral for the alleged violation of the aforementioned statute. He bolded in any public office for emphasis, but the president merely handed Pelosi a copy of his speech; he didn’t file this copy with any official—clerk or otherwise—whose job it is to make sure such documents are collected, recorded and physically and legally protected. Pelosi’s theatrical act is also protected by both the First Amendment and the Speech or Debate Clause of the U.S. Constitution.

Honestly, Trump / Gaetz / Kirk are objecting to Pelosi's obvious disregard for Trump's speech, as expressed through her tearing of it. But Trump's words are NOT sacred text. And even if they were, the Constitution would protect an expressive display of 2/x

Also, of course, Pelosi herself has the additional protection of the "speech and debate" clause of Art. I, s 6. 4/3+1

Imagine what it would be like to live in a country where it would be illegal to rip up your own copy of the president's speech https://t.co/DoZaeLXlli