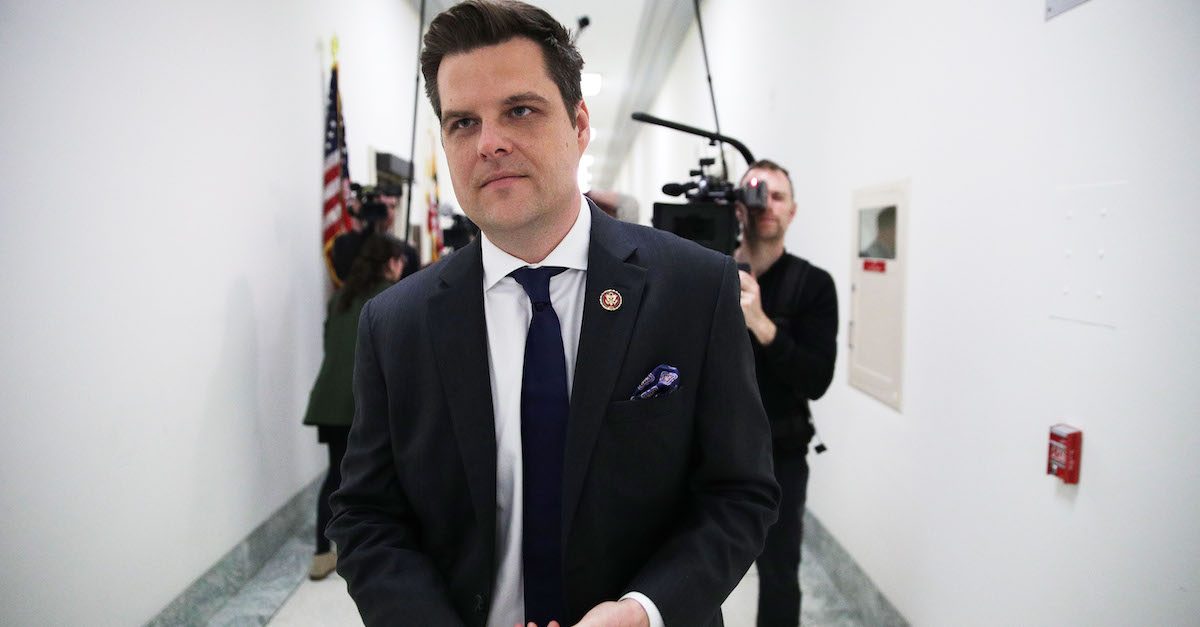 The Miami-Dade Democratic Party on Thursday filed a formal bar complaint against Florida Rep. Matt Gaetz (R), urging the Florida Bar to sanction the Trump acolyte for storming a secure congressional facility during the closed-door phase of the impeachment inquiry.

As Law&Crime previously reported at the time, a faction of approximately two dozen House GOP members, led by Gaetz, barged into the Sensitive Compartmented Information Facility, also known as a SCIF, interrupting the deposition of Deputy Assistant Secretary of Defense Laura Cooper. The group then refused to leave the facility, yelling and shouting down the procedure as a “sham process.”

According to the Miami New Times, the complaint also cited Gaetz’s refusal to leave the closed-door interview of former NSC top Russia advisor Fiona Hill (he was told to leave because he was not a member of any of the three committees conducting the deposition). That was a separate incident that happened days before the infamous storming of the SCIF.

“Both intrusions are improper, unethical, and were meant only to feed Gaetz’s unjustifiably large ego and penchant for grandstanding,” the complaint said, per the New Times. “These instances were in direct violation of the operative rules contained in the 116th Congress Regulations for Use of Deposition authority.”

“Gaetz is not a member of any of the House Intelligence, Foreign Affairs, or Oversight Committees, and he knew or should have known that he was not permitted to attend any of the closed-door depositions being held by these committees,” the complaint stated.

“Impeachment proceedings are a legal process leading to a trial, and therefore covered by the Florida Bar’s rules of conduct,” Simeonidis said. “But Republican Attorney General Bill Barr isn’t going to hold a member of his own party responsible. So we must appeal to our state’s institutions to restrain this rogue lawyer who obstructed the impeachment process twice and generally treats the powers of his elected office like a personal plaything.”

An ethics complaint was filed against Gaetz for allegedly tampering with then-witness Michael Cohen in Feb. 2019, the night before President Donald Trump‘s now-incarcerated ex-lawyer testified before the House Oversight Committee. 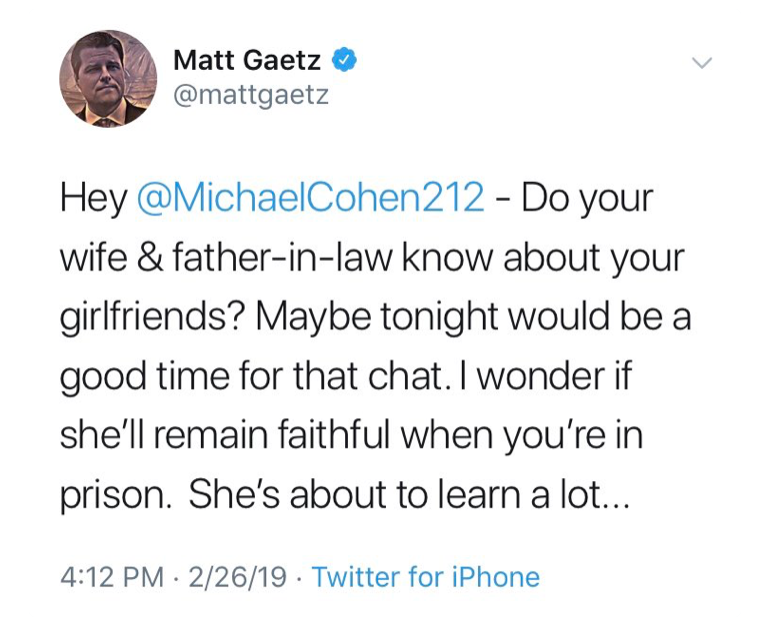 Many construed this as witness tampering; Gaetz said it was “witness testing.”

Gaetz later apologized. The Florida Bar looked into this incident. While the Florida Bar’s grievance committee found no probable cause to believe Gaetz violated any of its rules, spokeswoman Francine Walker said it would send Gaetz a letter of advice “essentially advising him not to do it again.”