Jonathan Turley Rips Pelosi, Says She Should Resign as Speaker for Tearing Up Trump’s Speech 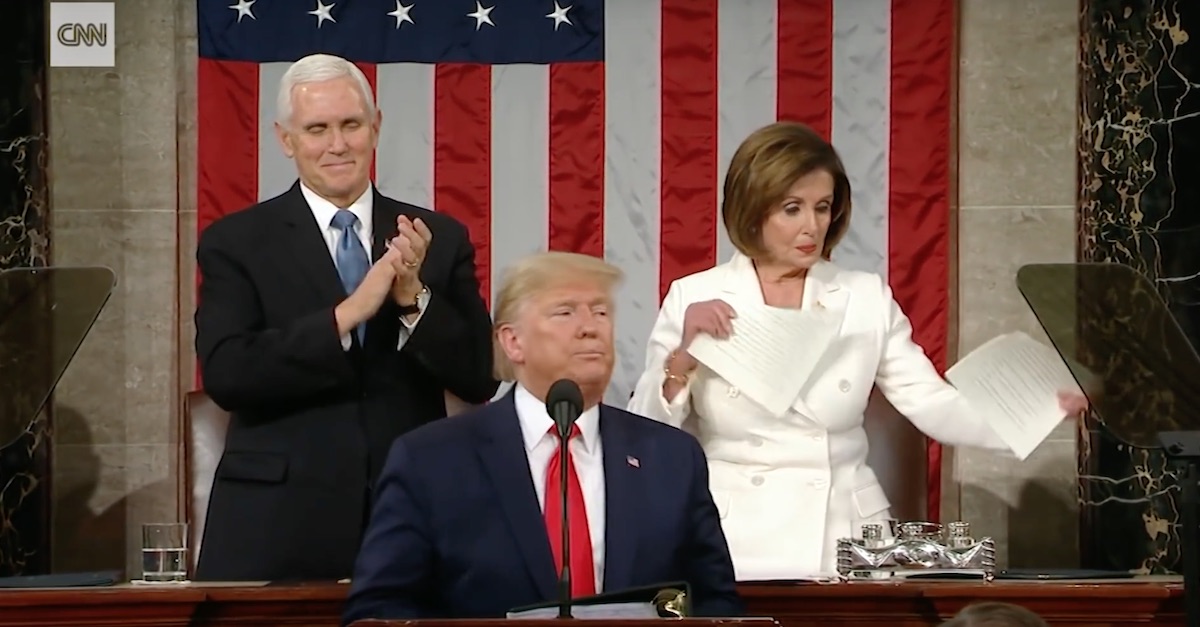 More are talking about what Speaker of the House Nancy Pelosi (D-Calif.) did to a copy of President Donald Trump’s State of the Union address than they are about the content of the actual speech. This is true on the president’s Twitter feed as well, and #PelosiMeltdown is trending. George Washington University Law Professor Jonathan Turley, known recently as the GOP’s lone expert witness in the House phase of the impeachment inquiry, ripped Pelosi in a blog post to the point of saying she should resign as Speaker.

DID NANCY PELOSI JUST RIP THE STATE OF THE UNION SPEECH OH MY GOD #SOTU2020 pic.twitter.com/Eet1daqGUk

Turley has criticized Pelosi’s House for “lowering impeachment standards to fit a paucity of evidence and an abundance of anger,” while acknowledging that the “use of military aid for a quid pro quo to investigate one’s political opponent, if proven, can be an impeachable offense.” On Wednesday, Turley was in as much of a rush to criticize Pelosi as the House was to impeach the president. He said her “disgraceful conduct” tore up “decades of tradition and left any semblance of civility in tatters on the House floor.”

Turley said he was “so offended” because he remembered a time 44 years ago when decorum mattered and lawmakers saw themselves as “custodians of this institution and bore a duty to strengthen and pass along those traditions to the next generation.”

Nancy Pelosi went in for the handshake aaaaand….Trump ignored it. pic.twitter.com/c8kFSP3kQr

Turley only lightly criticized Trump for snubbing a Pelosi handshake attempt and for “bestowing the Medal of Freedom on Rush Limbaugh in the gallery like a reality show surprise scene.” In Turley’s opinion, Pelosi lowered herself in status to “partisan troll” and, therefore, ought to “resign as speaker.”

Pelosi said afterwards that she ripped the SOTU speech because it was the “courteous thing to do considering the alternative.” She also called it a “manifesto of mistruths.”

Speaker Pelosi says she tore up her copy of Pres. Trump's State of the Union speech "because it was a manifesto of mistruths." https://t.co/cJFra13WAo #SOTU pic.twitter.com/PzUt1E2q5B

Pelosi said something about this on Twitter as well.

The words “faux outrage” were often used to describe the reaction to Pelosi’s statement.

Was it a new low when a Republican lawmaker shouted "you lie" during Obama's first SOTU? Fuck off Jonathan with your faux outrage. https://t.co/H0ZbZbzv3v

Outrage over Pelosi ripping the speech up isn’t real. They understand that faux disgust is a powerful weapon because it feeds their base and preys on the media’s obsession with symbolic objectivity. You don’t have to point out their hypocrisy. They know what they’re doing.

Speaking of decorum, 10 days ago, the president said the lead impeachment manager “has not paid the price, yet.”

Days later, a man is arrested for trying to do what the president threatened, just like another supporter did in Oct. 2018. #FauxOutrage https://t.co/9Mp5Sxtjlh