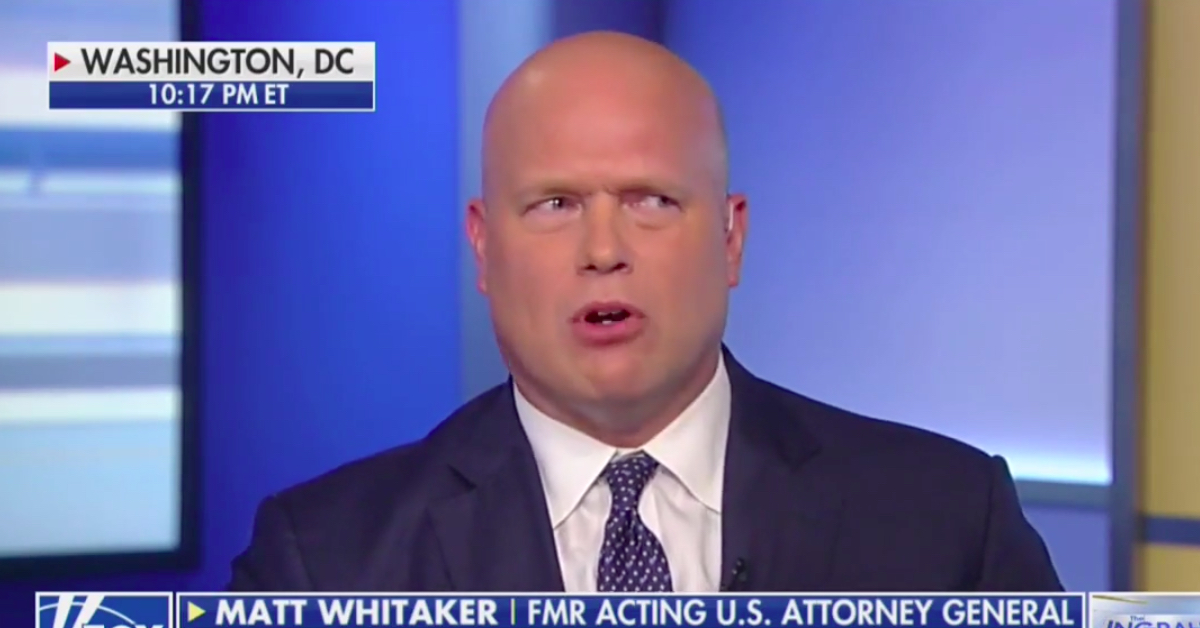 The Department of Justice (DOJ) sought to keep those documents secret in response to a Freedom of Information Act (FOIA) request and lawsuit filed by BuzzFeed News reporter Zoe Tillman in November 2018–roughly two weeks after Whitaker was appointed to the position.

The DOJ had argued that Whitaker’s financial disclosure forms were exempt from being released under FOIA due to the private financial information contained therein–and because they were allegedly drafted via “deliberative process,” a legal term of art and privilege which generally keeps internal executive branch decision-making from seeing the light of day.

Specifically, DOJ claimed that FOIA Exemption 5 provided the agency with an excuse to keep Whitaker’s disclosure forms from being viewed by the public. That exemption protects from disclosure “inter-agency or intra-agency memorandums or letters which would not be available by law to a party other than an agency in litigation with the agency,” according to the FOIA statute.

To qualify for the deliberative process privilege, the draft versions of Whitaker’s [financial disclosure] forms must have been both “pre-decisional” and “deliberative.” BuzzFeed argues that because the forms themselves “could not possibly have made any recommendations or expressed any opinions, they are not deliberative.” The Court agrees. After Whitaker submitted his [financial disclosure] forms to DOJ’s ethics officials, they shared the forms among themselves and with Whitaker several times before final approval. The ethics officials followed this process to “accurately complete the [forms] under the applicable statute, regulations, and guidance.”

“But DOJ has not carried its burden of establishing that the draft forms themselves reflect the deliberative process, so the exemption does not apply,” the decision continues.

The Trump administration unsuccessfully claimed that releasing the documents would result in less honesty from federal appointees.

“Such disclosure would result in the public seeing reports that are incorrect,” a government filing from July argued. “If filers believe that all iterations before finalization are going to be released, they may be less willing to work with their ethics officials to correct the report.”

McFadden also took the opportunity to rubbish some of the DOJ’s legal argumentation in somewhat harsh terms.

“DOJ was not formulating policy at all. Its ethics officials were merely trying to assist in the accurate completion of Whitaker’s financial disclosure forms in compliance with the Ethics in Government Act and OGE policy,” the decision notes. “DOJ’s attempts to recast the process as the formulation of an internal policy contradicts its own stated objectives.”

And, the court found, even if there were any such attempts to formulate policy, that’s not what was at issue here.

McFadden goes on to note that Whitaker’s initially submitted financial disclosure forms are “pre-decisional” because they were simply official forms filled out by a political appointee and then passed on to the agency for perusal. BuzzFeed did not seek any messages or emails related to any after-the-fact decision-making between Whitaker and DOJ.

In other words, the financial disclosure forms themselves are simply plug-and-play documents that do not necessarily invite–and here do not, in fact, include any deliberation at all. That Whitaker and DOJ later hashed things out between them viz. those forms and their contents is immaterial for FOIA purposes because the first drafts don’t include any such deliberations or decisions including DOJ.

In other other words, documents filled out by Whitaker alone clearly don’t implicate the DOJ and therefore don’t qualify for a FOIA exemption.

The DOJ also argued that Whitaker’s financial disclosure forms were protected from disclosure because they contain “private financial information.” Despite the overall loss, McFadden conceded that DOJ had adequately shown the forms contained at least some such information.

[T]hough the Court agrees that portions of the forms contain private financial information, some portions can be released without infringing Whitaker’s privacy,” McFadden noted.

View the full filing below: