Trump Admin Singled Out California Over Its Abortion Coverage Law, But Ignored 5 Other States 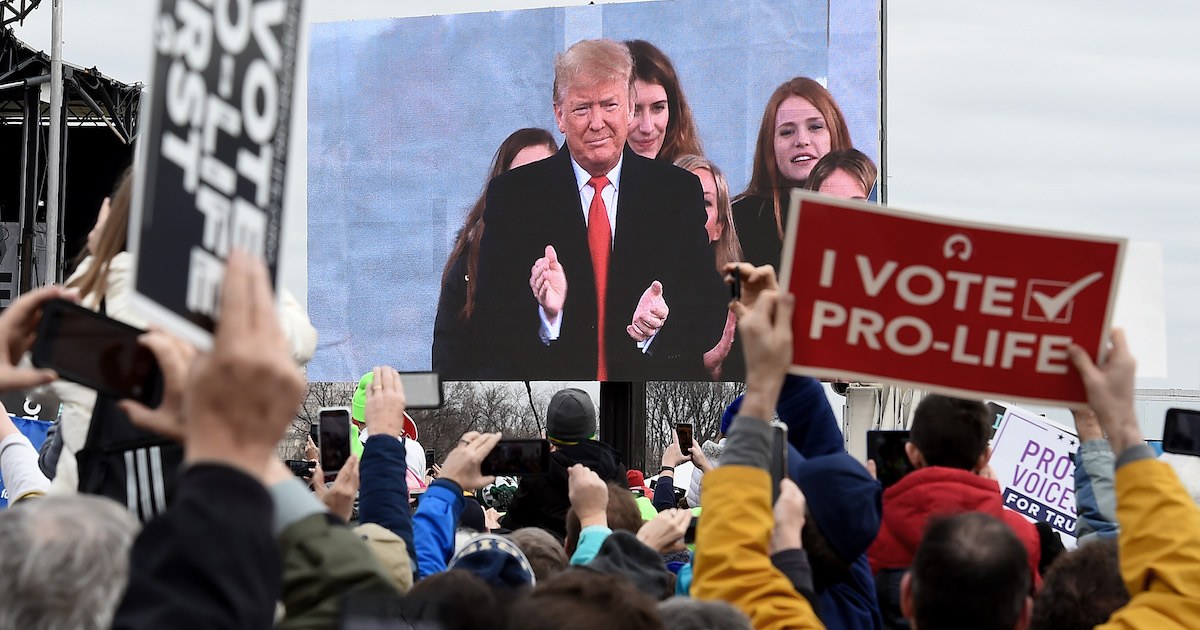 Pro-life demonstrators listen to US President Donald Trump as he speaks at the 47th annual “March for Life” in Washington, DC, on January 24, 2020. – Trump is the first US president to address in person the country’s biggest annual gathering of anti-abortion campaigners.

The federal Department of Health and Human Services (HHS) sent a formal notice to California on Friday, stating that it “cannot impose universal abortion coverage mandates on health insurance plans and issuers in violation of federal conscience laws.” The notice went on to say that “California has deprived over 28,000 people of plans that did not cover elective abortion, but now must cover abortion due to California’s mandate.”

According to the notice, the Office for Civil Rights (OCR) has completed an investigation of complaints made against California, and determined that the state violated the Weldon Amendment. If California doesn’t clean up its act and provide OCR “sufficient assurance that California will come into compliance with federal law,” within 30 days, it will risk receiving future federal healthcare funding.

The Weldon Amendment, adopted in 2009, prohibits funding as follows:

California passed a state law in 2014 requiring all insurance plans, including those offered by employers, to cover abortion. The mandate does not apply to public insurance programs like Medicaid, which have long been barred by federal law from covering abortion services.

California Governor Gavin Newsom (D) was undeterred by HHS’s threat to withhold funding, telling press that “the Trump Administration would rather rile up its base to score cheap political points and risk access to care for millions than do what’s right.”

“California will continue to protect a woman’s right to choose, and we won’t back down from defending reproductive freedom for everybody — full stop,” Newsom continued.

Roger Severino, the head of HHS’s Office for Civil Rights, had a full-stop of his own. Severino told reporters Friday:

If states receive federal funds from HHS and other agencies, they cannot discriminate against health plans that decline to pay for abortion. Period. Full stop. We want California to come to the table so people won’t be forced to choose between having insurance coverage for their families and following their conscience.

According to HHS, its notice and warning to California was the result of an investigation sparked by a failed lawsuit filed by the Missionary Guadalupanas of the Holy Spirit. Certainly, the usual arguments are already lined up as to whether California’s mandate actually constitutes illegal discrimination or violation of the Weldon Amendment. But there’s something going on here: the federal government’s choice to single out California.

Five other states — Illinois, Maine, New York, Oregon and Washington — have nearly-identical laws mandating insurance coverage for abortion services. Yet, HHS mentioned none of those states in its warning.

Can the federal government do this? Can it legally discriminate against one state, and choose to selectively enforce federal law?

Yes and no. States themselves do not have equal protection rights. Those are reserved for individuals. Individuals absolutely have the right to protection from selective enforcement of laws either by the state or federal governments. However, even if an individual could articulate a sustainable case of individual discrimination based on state of residence, it would receive only the lowest form of Constitutional scrutiny. It is possible that at some later date, individual Californians who become disadvantaged as the result of HHS’s withholding federal healthcare funds could bring a successful claim against the federal government; at this point, however, such a claim is speculative at best. Nothing in the Constitution, however, specifically insists that the federal government treat all the states equally.

Likely, the Framers believed that the combination of our electoral system and our bicameral legislature would serve as inherent protection against presidential favoritism of certain states. What they may not have anticipated, however, is a president whose campaign strategy includes targeting a particular state. President Trump has made a public show of declaring war on California for some time — a move that appears to have endless potential to energize his base.