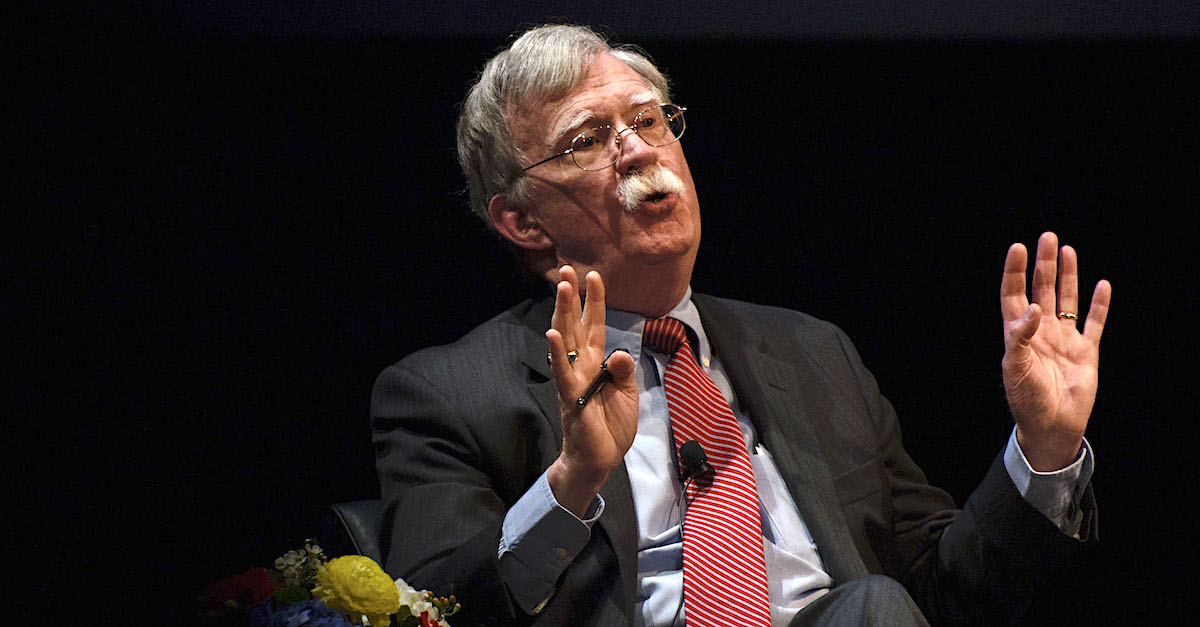 A Friday afternoon telephone hearing in the Trump Administration’s civil lawsuit against former ambassador and former National Security Advisor John Bolton got off to a rough start.

Issues involving an attorney’s cell phone connection stymied an on-time start; conference call numbers for the public to listen to the proceedings were jammed; the court did not allow the proceeding to be retransmitted by mass media so that all could listen. That said, here is Law&Crime’s synopsis of the top moments from the hearing once it was underway.

The core issue before Senior Judge Royce C. Lamberth is whether to order Bolton to make efforts to shut down the planned Tuesday release of his tell-all book. With hundreds of thousands of copies of the book already scattered across the country and ready for the shelves, the discussion turned to a farmer’s euphemism: the horse is already out of the barn.

NEW: Judge Says John Bolton Endangered the U.S. and ‘Potentially’ Committed Crimes, But He Gets to Publish His Book

“No court will order a farmer to lock the barn door if the horse is running around in the pasture,” said attorney and notable Trump critic George Conway in a chat room conversation about the hearing with Supreme Court lawyer Neal Katyal.

The horse and barn euphemism was highly favorable to Bolton. His attorney began his side of the case by showing a picture to the judge of a White House reporter holding Bolton’s book this week and asking White House Press Secretary Kayleigh McEnany about it. The information is out.

The government initially suggested that a sweeping injunction against publication of the book would apply not just Bolton, the named defendant, but also to book distributors and other third parties. The government said Rule 65 of the Federal Rules of Civil Procedure authorized such a move. The government argued that harsh tactics were necessary in this case to prevent future public officers from blowing off the prepublication review process.

Later in the arguments, the government attempted to articulate that a clawback of the book at this point was feasible because Bolton had already been able to convince his publisher, Simon & Schuster, to delay the book at least once in the past. Those arguments were trolled by observers as weak. Bolton’s attorney used them to show Bolton engaged in prepublication review in good faith and that the government was in error.

Further along in the hearing, the government also said the judge should enjoin the release of digital copies and audiobooks, even if some hard copies slip through the cracks. Such a crackdown on public dissemination of the work would limit access to the information, at least in its raw form.

3. The Government Made Several Awkward Admissions.

Among them was that the government decided to classify some information only after seeing it appear in a draft copy of Bolton’s manuscript.

Another was this: the judge asked the DOJ if President Trump himself had instructed anyone to say portions of the book were classified and thus not ready for print.  The DOJ lawyer simply said they didn’t know.

4. The Hearing Veered Toward the Merits.

While the immediate issue before the court was whether to issue a Hail Mary attempt to shut down the book’s release, the parties all tried to score points by lodging deeper issues.

As if sniffing the wind to find weaknesses in the government’s argument, Judge Lamberth wanted to know why the DOJ had not given the court access to the sort of information the government claims is classified yet which remains in Bolton’s book. The judge also wanted to know why an alleged “political operative,” National Security Council’s Senior Director for Intelligence Michael J. Ellis, started reviewing the book after Ellen Knight, the career employee whose job it was to complete the review, allegedly told Bolton everything was in order — but not in an official letter, as is customary.

The DOJ responded that it was not aware of any other official containing Ellis’s job description of having ever swooped in to assume a prepublication review, but that this case was extraordinary because the author was a former national security advisor and that the damaging information was recent. The judge’s response after that dubious articulation was to tell the DOJ to move along with whatever it wanted to argue next. That was the judge’s signal to the DOJ to stop reaching for excuses.

Bolton’s attorney, Charles J. Cooper, basically accused the government of bad faith in this process. But the Judge also seemed concerned that Cooper had not obtained an affidavit from Knight to support his case.

5. Breach of Contract Was Among the Government’s Strongest Arguments On the Merits.

The DOJ relied heavily on the argument that Bolton breached various contracts with the government by publishing his book without completing its required prepublication review process. That process, the DOJ said, was for the government, not Bolton, to decide when to conclude. If Bolton wanted clarity from the government or wished to speed up the process, he could have sued, not published, the DOJ argued.

The judge finally asked Cooper why Bolton took the risk of publishing without final written approval. Cooper said Bolton’s position is that the content which remained in his book was not subject to the requirements for written authorization for publication.

Here, the judge began asking about Sensitive Compartmented Information, or SCI, which is a particularly sensitive type of classified information. It appeared from the context that further discussions about this subject matter would veer into a closed-door hearing with the judge to prevent disclosure to the public. Cooper, Bolton’s attorney, said the first time the Trump Administration complained of SCI being part of Bolton’s book was after it filed litigation this week. In other words, he suggested the SCI claims were bogus.

6. There Were Frequent References to “Troubling” Information.

Speaking of awkward DOJ admissions, Cooper dove into complaints that Ellis, the alleged political operative who ultimately came to review the Bolton manuscript, had not been properly trained to undertake the review he undertook. DOJ admitted this in a Friday court filing ahead of the hearing.

Ellis obtained clearance March 1, but began his additional prepublication review of Bolton’s work May 2, one week after Knight — allegedly — completed her review.  But Ellis was not trained as an original classification authority (OCA) when he undertook the review, Cooper argued, citing one executive order and one federal regulation to support his argument that Ellis wasn’t up to snuff and therefore didn’t have the legal authority to make the decisions he made. Cooper said Ellis wasn’t properly trained until June 10.

7. Did Bolton Ever Tell the Government He Was Going to Publish?

This question from the judge resulted in a simple answer from Cooper: No.

The judge did not immediately rule on whether the book can be published. Based on the legal arguments and the judge’s questions, it seems extremely unlikely that the judge will bar the book’s publication. After the book hits the shelves, the case could move into other phases. The government wants to take the money Bolton will almost certainly make off of the book. That would likely result in discovery, and many of the contested or unclear facts would, as one of the attorneys said, become hopefully more clear in that process.

UPDATE:  the judge ruled Saturday morning that the publication of Bolton’s book would not be restrained; however, the judge harshly rebuked Bolton’s conduct.  READ Law&Crime’s additional reporting here.