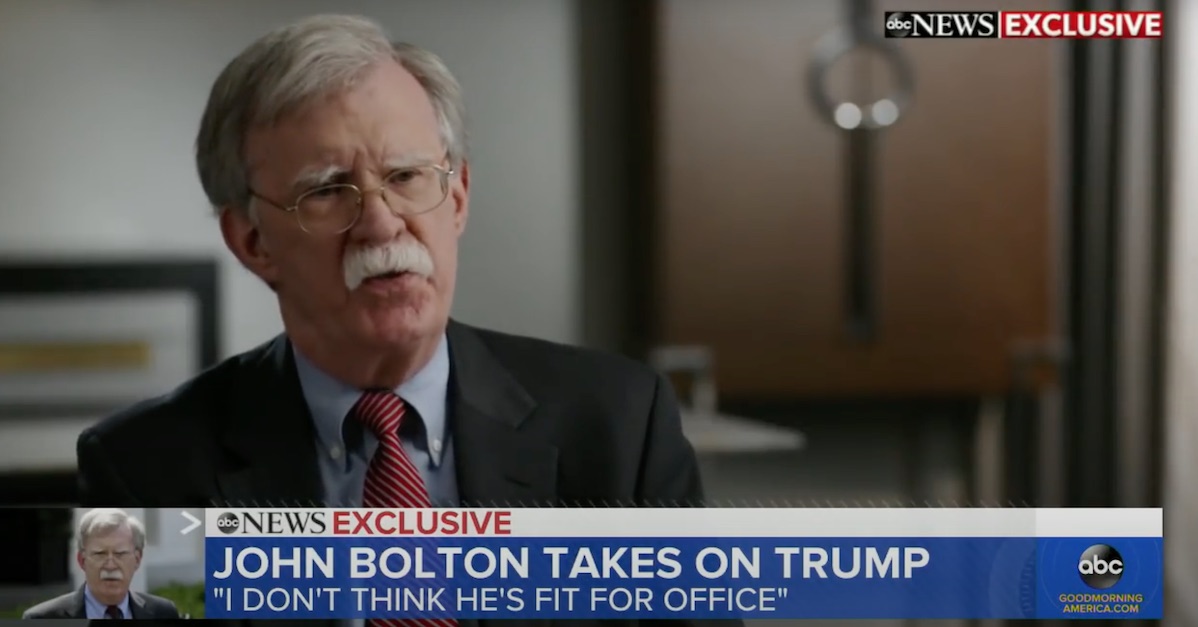 It didn’t take long for the Department of Justice to sue former Trump National Security Advisor John Bolton over his controversial memoir, The Room Where It Happened. Bolton, of course, chose to write a book about his time in the White House rather than testifying as a witness against President Donald Trump during impeachment proceedings. Now a lawyer who represented the Ukraine whistleblower says Bolton is in “real legal jeopardy.”

While Trump has already raised the specter of “criminal problems” and while the DOJ is reportedly looking into that possibility, national security attorney Mark Zaid focused largely on the prospect of Bolton losing out on book profits in civil litigation.

“What happens to Bolton, do you think?” Law&Crime founder Dan Abrams asked Zaid during Wednesday’s edition of the The Dan Abrams Show on SiriusXM.

“Bolton is in real legal jeopardy,” Zaid began. “Because he allowed the government to put him on the defensive rather than the other way around. Anyone who has a security clearance — that doesn’t matter how far back — has an obligation to protect classified information.”

“When you have had access to what we call SCIs — Sensitive Compartmented Information — those nondisclosure agreements have a specific, mandatory prepublication review requirement in perpetuity. Forever,” Zaid continued. “The thought process being let the government have the opportunity to review the book to ensure there’s nothing classified. If you do not meet that obligation, which is just, it’s a normal contractual obligation — you hire someone to do the windows on your house, they do a lousy job, you sue them for breach of contract.”

The national security lawyer noted that the government is prepared to hit Bolton where it hurts: his bank account.

“If they don’t meet obligation it doesn’t even matter if there was a word of classified information in the book. They would have breached their contract. The remedy for the government is financial. The courts have established for the last 40 years, from the Supreme Court down, that they can impose a constructive trust to grab the book advance and any royalties associated with the book,” Zaid said. “I could see them possibly going after speaking fees too. That would be new, that would an expansion of the constructive trust, but I can see that possibly happening.”

On Wednesday night, the DOJ filed a memorandum of law in the U.S. District Court for the District of Columbia. DOJ is asking for a temporary restraining order and emergency preliminary injunction to block Bolton from publishing the book.

“A National Security Advisor to a sitting President possesses national security information like few others. Were such a person to offer such information for sale to foreign governments, all would readily acknowledge the wrongdoing involved,” DOJ warned. “That is why, when similar risks occur from the proposed dissemination of books, such individuals are required by contractual and fiduciary obligations to submit their manuscripts for prepublication review and not to publish them without having received written approval to do so.”

“In this case, defendant John Bolton has not received any such approval, but unilaterally has decided to abandon the prepublication review process that he agreed to and instead plans to disseminate classified information as he sees fit in order to profit from his book. To be clear: Defendant’s manuscript still contains classified information, as confirmed by some of the Government’s most senior national-security and intelligence officials— the Director of National Intelligence, the Director of the National Security Agency (‘NSA’), the Director of the National Counterintelligence and Security Center, and the National Security Counsel’s (‘NSC’s’) Senior Director for Intelligence Programs,” DOJ continued. “Disclosure of the manuscript will damage the national security of the United States. The United States asks this Court to hold Defendant to the legal obligations he freely assumed as a condition of receiving access to classified information and prevent the harm to national security that will result if his manuscript is published to the world.”

Along with that lengthy memo of law, DOJ submitted a proposed order for Judge Royce Lamberth to sign. The hoped-for order states:

Defendant is required to ensure that his publisher and resellers receive notice of this Order; and This injunction binds Defendant, along with his “officers, agents, servants, employees, and attorneys,” and “all other persons who are in active concert or participation with” him, if they receive actual notice of the order, Fed. R. Civ. P. 65(d)(2), including Defendant’s publisher, Simon & Schuster, and other such persons in the commercial distribution chain of Defendant’s book.

Simon & Schuster has already said in a statement that the DOJ lawsuit is “nothing more than the latest in a long running series of efforts by the Administration to quash publication of a book it deems unflattering to the President.”

“Ambassador Bolton has worked in full cooperation with the NSC in its pre-publication review to address its concerns and Simon & Schuster fully supports his First Amendment right to tell the story of his time in the White House to the American public,” the publisher said.