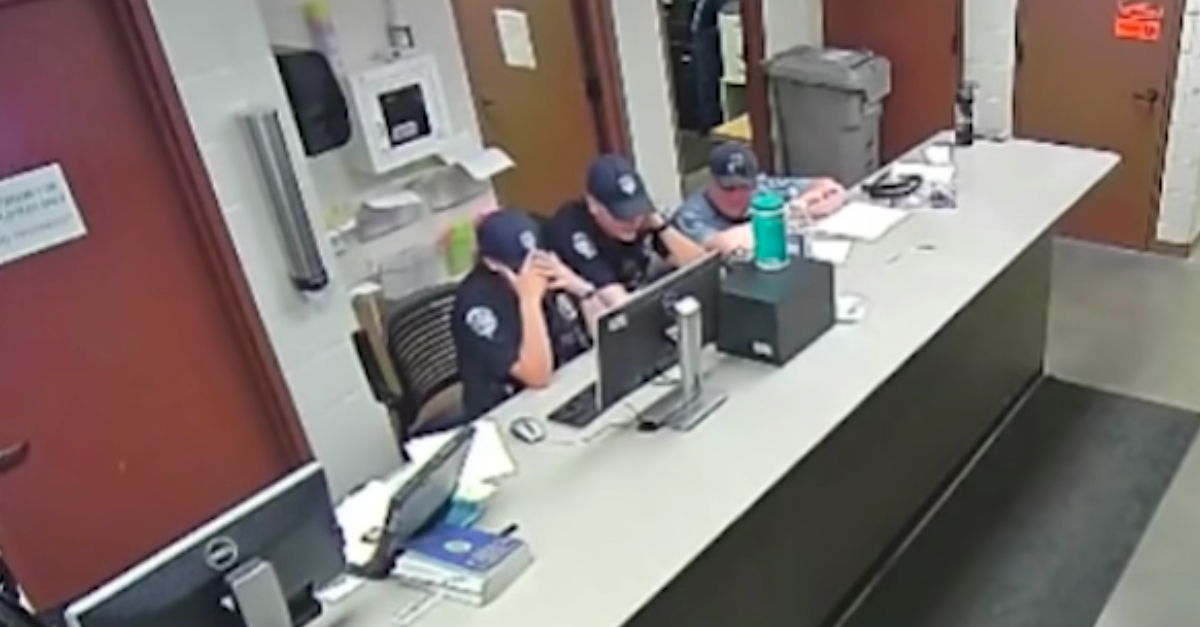 Officers with the Loveland Police Department in June 2020 arrested Garner, who says she lives with dementia, in the parking lot of a Walmart, leaving her with multiple injuries, including a broken humerus, sprained wrist, and a dislocated shoulder after she forgot to pay for $13.88 worth of items.

Body camera footage of the encounter appeared to show the arresting officer, Austin Hopp, grabbing Garner from behind and pulling her arms behind her back in order to handcuff her in the grass and dirt while Garner screamed, “Don’t do that.” Garner, heard telling the officer he didn’t “get to act this way,” Hopp apparently yanked a cell phone from her hand and threw it in the grass and later grabbed her arm, twisting it behind her back as he bent her over the hood of his vehicle.

Hopp was placed on administrative leave earlier this month after Garner filed a federal civil rights lawsuit accusing him of being responsible for Garner’s injuries during the arrest. Another officer involved in the encounter, Daria Jalali, was reassigned. The department claimed not to have been not aware of the incident until Garner filed the suit.

RELATED: ‘Did You Hear the Pop?’: Officers Fist Bump After Injuring Shoulder of 73-Year-Old Woman Who Has Dementia (VIDEO)

According to the lawsuit, Garner had forgotten to pay for the items because she lives with cortical dementia, which is characterized by the impairment of at least two brain functions. She also says she has sensory aphasia, which the suit described as an “inability to understand spoken, written or tactile speech symbols that results from damage to the area of the brain concerned with language.”

Additional surveillance footage released this week intensified public backlash and brought further disciplinary action: The newly released video showed three Loveland Police Department officers—later identified as Hopp, Jalali, and Community Service Officer Tyler Blackett—laughing as they watched the body camera footage of Garner’s arrest. Two of the officers gave each other a fist bump during a discussion about hearing Garner’s shoulder “pop” during the arrest and voiced concern that she was “senile.”

All three officers were placed on administrative leave along with Sergeant Philip Metzler, who was Hopp and Jalali’s supervising officer when Garner was arrested.

“We are pursuing every option to swiftly address concerns raised through the lawsuit and the corresponding video footage,” Loveland City Manager Steve Adams told CNN. “These concerns and future actions include mandatory training on interacting with mentally ill citizens and mandatory training on recognizing Alzheimer’s and dementia in citizens.”

The department’s spokesperson Tom Hacker told NBC affiliate KUSA that Blackett was at the booking location Garner was transported to following the arrest and participated in her transfer to Larimer County Jail.

“It’s a really important thing for everyone to know that this is now a criminal investigation,” Hacker said. “It’s one that LPD asked for, and the DA is taking it on Fort Collins Police, both working on this [investigation] and we hope that this investigation goes as expeditiously as possible and that we learn of the outcome very soon.”