Surfside Tower Collapse: A Look at the Lawsuits Filed So Far

Surfside Tower Collapse: Plaintiffs Line Up for Lawsuits as Crews Attempt to Recover Victims from Rubble 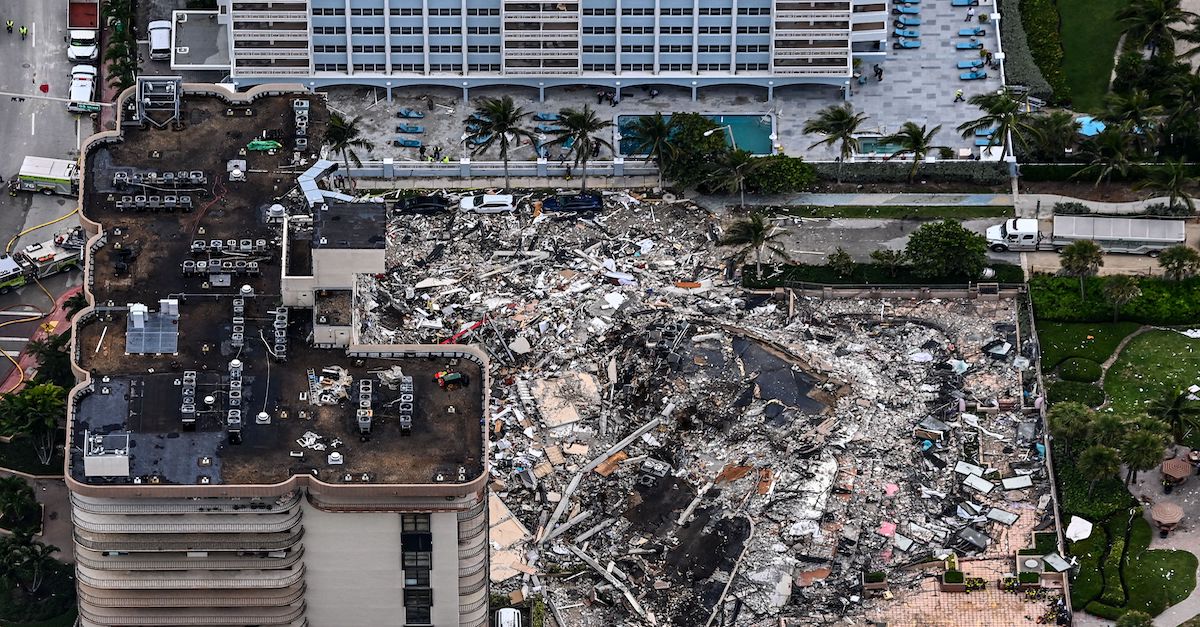 This aerial view shows search and rescue personnel working on site after the partial collapse of the Champlain Towers South in Surfside, north of Miami Beach, on June 24, 2021.

In the weeks since the June 24 collapse of the Champlain Tower South condominium building in Surfside, Florida, there has been shock, speculation, and an agonizing search for survivors that officially shifted to a recovery effort on Wednesday.

There have also been lawsuits.

At least ten plaintiffs have sued the Champlain Towers South (CTS), according to Miami-Dade County court documents. Some have filed in their individual capacity as Champlain Tower condominium owners, while others have filed with the intention of expanding the claim into a class-action lawsuit.

Some plaintiffs filed as representatives of their loved ones, now believed to have been killed in the early-morning collapse. Alex Anton lost his mother, Beatriz Rodriguez Guerra; Steven Rosenberg and his siblings lost their father, Harold Rosenberg. Soriya Cohen lost her husband, with whom she shares two minor children. Anita Altman lost both her parents, Isais and Guta Stawski, and her adult son, Michael Altman, who himself was the father of two minor children.

The complaints are each unique, and the plaintiffs are each represented by a different attorney. But all of them accuse CTS of varying degrees of negligence. Those who lost family in the collapse also allege wrongful death. Some lawsuits are suing CTS alone, while others name additional defendants such as the onsite property manager, an engineering consulting firm, building architects, and multiple insurance companies. One plaintiff, Rosenberg, pledged in his complaint that the town of Surfside will also be named as a defendant.

The cases haven’t yet been consolidated, although that is likely to happen. At least three cases are before Judge Michael Hanzman, and some that aren’t have requested consolidation before him.

The first to file was Drezner, who lived in the south tower in a unit he owned. He filed his class action lawsuit on June 24, just hours after the collapse, and his case, which is before Hanzman, has seen the most action so far.

On July 4, for example, an animal rescue volunteer asked Hanzman for permission to enter the building to save a resident’s cat that was known to be inside the South Tower — a request Hanzman denied. On June 28, attorneys for the James River Insurance Company, the general liability insurer for the Champlain Towers South Condominium Association, filed a letter in the Drezner case advising that the insurance company has “made the decision to voluntarily tender its entire limit from the enclosed policy towards attempting to resolve all the claims in this matter,” court documents show.

Hanzman also authorized receivership payments to South Tower residents who need financial support. Families of survivors may receive $2,000 for each person lost, to assist in payment of “expenses attendant to end of life needs” and up to $10,000 for each family who “require financial assistance to relocate or obtain new housing,” according to Wednesday’s filing.

After Drezner’s lawsuit was filed, other complaints started to stream in. Steve Rosenthal filed his lawsuit a couple of days after the collapse, on June 26. He owned a unit in the South Tower and was there when it came crashing down. Two lawsuits were filed on June 28: Anton’s claim on behalf of the estate of his mother and a class action by Raysa Rodriguez, a CTS resident whose experience in the building the night of the collapse was captured on voicemail, as CNN reported.

Legal experts noted the speed with which the cases have been filed and expect that the cases are likely to be consolidated.

“There is a good side and bad side to it,” personal injury attorney Chip Dean, who is not affiliated with any of the Florida cases, said of the lawsuits that have already been docketed thus far. “We are probably an overly litigious society, and quick lawsuits bring up the concept of looking for a deep pocket, of greed. On the other hand, there are legitimate reasons to file so quickly, such as preserving evidence, and getting an early start on an investigation.”

“The court will undoubtedly consolidate the cases,” Dean added, which could potentially streamline the proceedings going forward.

John Broghammer, a construction defect defense attorney who is also not affiliated with any of the Florida cases, said that he expects the cases to settle as quickly as possible, rather than spend years in litigation.

“It would make more sense to settle in this situation, for a couple of reasons,” Broghammer told Law&Crime. “How much money are you going to spend fighting a case where, even if you’re just 0.5% liable, the damages are still astronomical, considering the catastrophic loss of life and property?”

“You also have to weigh the risk to your client,” Broghammer said.

Cases like the tower collapse “are hard cases to win, because if you lose, you’re out of business,” he added.  “You have to go bankrupt.”

“There’s no amount of insurance that can pay for all this,” Broghammer continued. “Buildings don’t just fall down. There’s no indication this was because of a weather event, or an explosion. It leads to the obvious conclusion that there was some sort of internal event.”

Florida officials have promised to conduct multiple criminal investigations into the collapse, including a grand jury investigation, according to the Associated Press.

Regardless of what happens going forward, Dean, the personal injury attorney, said that the survivors and family members have a long road ahead of them.

“It’s exhausting,” Dean said of the legal process. “It’s going to test them. They’re at the whim of the court, and other litigants, because no one’s rights are any better or worse than anyone else’s.”

“Tragedy spawns additional tragedy,” Dean also said. “I often tell people that it’s understandable to feel anger after such unspeakable loss. However, to the extent that they let that anger further damage them—causing them to start drinking, or use drugs, or spend money to the point of going bankrupt—they have let the wrongdoers let them injure them again. They should do everything they can not to let that happen, because one tragedy is enough.”