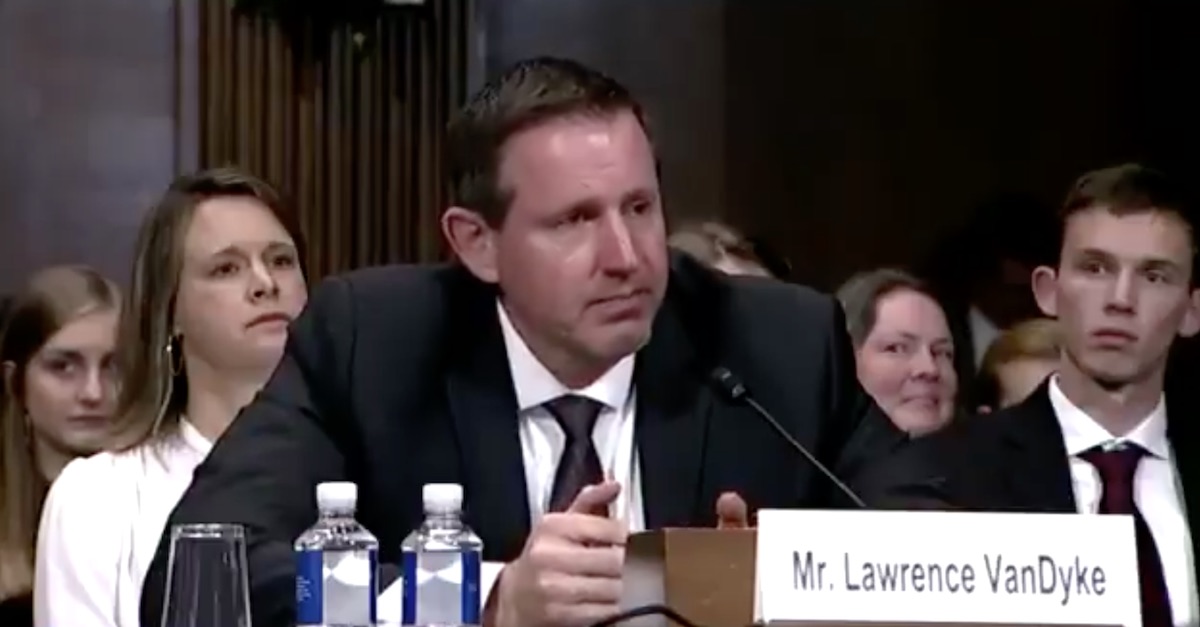 Republicans in the Senate on Wednesday confirmed Trump judicial nominee Lawrence VanDyke to a lifetime appointment as a federal judge on the Ninth Circuit Court of Appeals. In a near party-line 51-44 vote, every Republican except Sen. Susan Collins (R-Maine) voted in VanDyke’s favor, while every Democrat voted against.

President Donald Trump on Thursday tweeted his congratulations to the newly confirmed VanDyke.

Congratulations to JUDGE LAWRENCE VANDYKE on being confirmed to the Ninth Circuit. Great job!

Prior to his confirmation hearing, the American Bar Association (ABA) in October said that after a formal review of his professional record, a “substantial majority” of the committee found VanDyke was “not qualified” to serve as a federal circuit judge.

While the ABA conceded that VanDyke was “a highly educated lawyer with nearly 14 years of experience in appellate law,” these accomplishments were “offset by assessments of interviewees that Mr. VanDyke is arrogant, lazy, an ideologue, and lacking in knowledge of the day-to- day practice including procedural rules.”

“There was a theme that the nominee lacks humility, has an ‘entitlement’ temperament, does not have an open mind, and does not always have a commitment to being candid and truthful,” the ABA added.

During VanDyke’s confirmation hearing, Sen. Mike Lee (R-Utah) asked the nominee directly if he would be fair and impartial to all litigants and to judge them by the merits of claims and their legal arguments. VanDyke said, “Absolutely, senator.” He committed to keeping an open mind, not prejudging a case, and following the law where it leads.

VanDyke was also asked if he had any “personal animus against LGBT persons.”

“None at all,” he said. VanDyke said, tearing up, “It’s a fundamental belief of mine that all people are created in the image and likeness of God.”

Democrats, Sen. Kamala Harris (D-Calif.) for instance, said VanDyke’s writings on guns and seeking of an endorsement from the NRA meant he had “no business” being on a federal court for life.

Lawrence VanDyke once wrote that all gun safety laws are "misdirected" and even sought the endorsement of the NRA in a 2014 campaign.

VanDyke has no business serving a lifetime appointment to the 9th Circuit. Earlier today, I voted NO on his nomination.

But former colleagues and conservatives speaking out in VanDyke’s defense argued from the start that the ABA perpetrated a “political drive-by shooting.”

This is such a dishonest framing. Many of his former colleagues praised him effusively and were never asked by the ABA to respond to the various criticisms. Others attested this description in no way matches the VanDyke they know. https://t.co/lzQRf4H6Mg

Following his confirmation, one of VanDyke’s former law school classmates penned an op-ed in the Yale Journal on Regulation criticizing the ABA’s rating, writing that the characterizations in the letter, “don’t just make me raise my eyebrow, they outright leave me shaking my head.”

“The VanDyke I know isn’t a snob or a dismisser of ideas. I’ve never seen him act like he was better than anyone,” the author said.