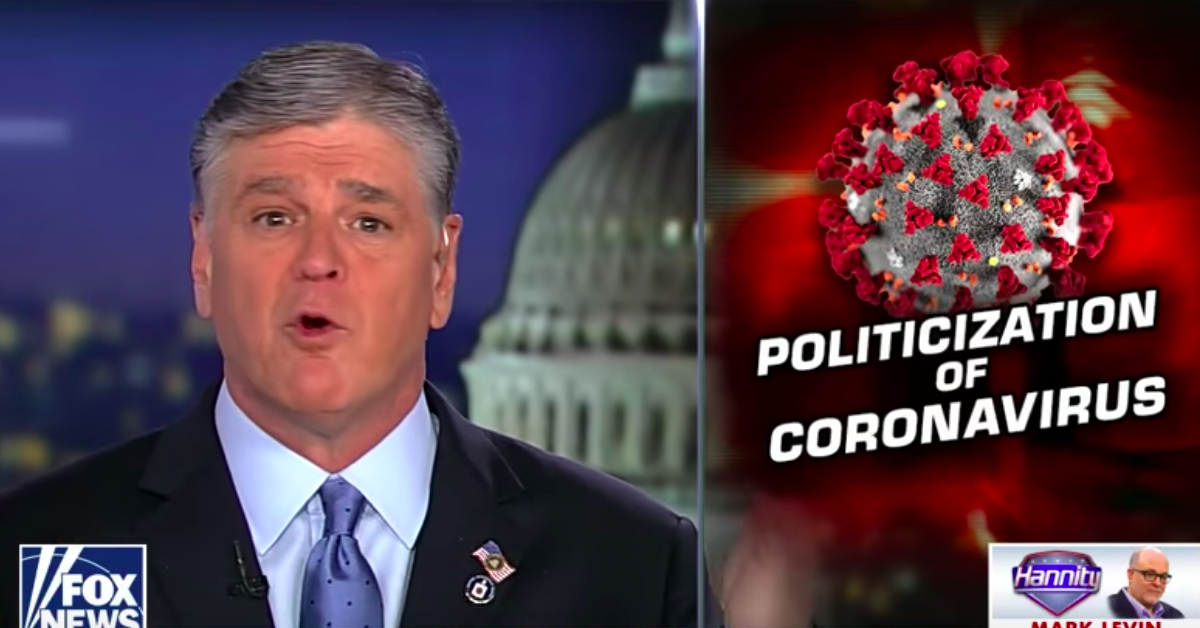 Fox News host Sean Hannity floating hiring attorneys for the purpose of suing several news outlets for “slander, besmirchment, [and] character assassination,” accusing them of lying about his coverage of the novel COVID-19 coronavirus on his daily talk radio and cable news show.

“Then you got Joe Lockhart [saying], ‘This is all over. We have to have an honest national conversation, the toxic effect of Fox News.’ Really? Unbelievable,” Hannity said during Wednesday’s episode of iHeartRadio’s The Sean Hannity Show.

“Joy Reid, on her show, she had a guest on her show, literally — this kind of shocked me a little bit, and it didn’t get corrected, [say], ‘Fox News has been getting people killed for years.’ I’m like, huh? Then you got another idiot over there, this is how morally bankrupt these so-called news agencies are, [saying] ‘Trump is guilty of negligent homicide.’ And they’re saying conservatives mishandled this?” he said.

Hannity then said he needed to hire a couple of high-priced attorneys and start filing lawsuits.

“I need to hire Lin Wood and Charles Harder, and just make this a test case, of slander, besmirchment, character assassination,” he said. Wood famously represented Richard Jewell after he was falsely accused of being involved in the 1996 Centennial Olympic Park bombing. Wood also represents Covington Catholic teen Nick Sandmann. Harder represented Hulk Hogan in a lawsuit that eventually took down Gawker. Harder is an attorney for President Donald Trump.

“That’s why — Nicholas Sandmann is not a public figure, he’s absolutely going to be a billionaire at the end of this, after what they did to that poor kid,” Hannity continued.

Hannity treated the global pandemic more seriously in recent days, but last week he cited a QAnon-pushing conspiracy theorist to suggest it “may be true” that the virus was actually a “Deep State” plot that “will go down in history as one of the biggest frauds to manipulate economies, suppress dissent, and push mandated medicines.”

It's almost like he doesn't realize VIDEO EXISTS https://t.co/ilnQKOVcv4

Despite evidence to the contrary, Hannity said that he and his colleagues at Fox News had consistently taken the coronavirus seriously.

“You know what, if it wasn’t so serious, it was pretty sick and you could probably laugh at it but nothing to laugh at here,” he continued. “By the way, this program has always taken the coronavirus seriously and we have never called the virus a hoax.”

Aside from Tucker Carlson, many of Fox News’s other hosts have been criticized for failing to properly address the pandemic, as depicted in this viral video edited by The Washington Post.

How Fox News has shifted its coronavirus rhetoric https://t.co/tTUOIV0tUi pic.twitter.com/q4FdGdduDX