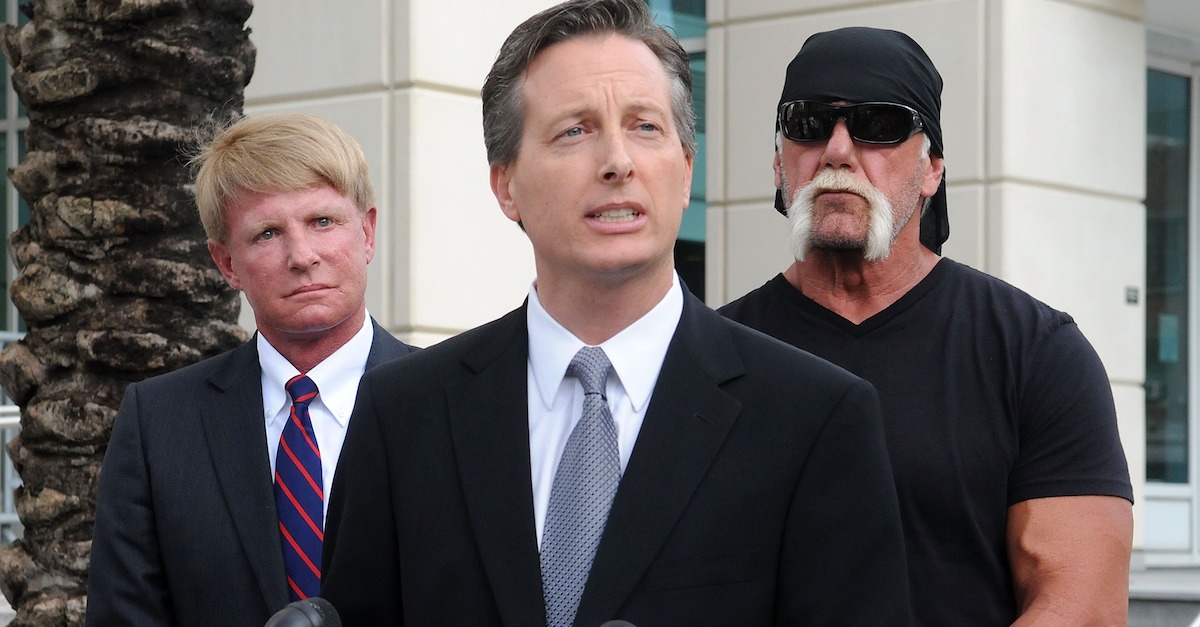 TV personality Terry Bollea aka Hulk Hogan (R) and his attorneys David Houston (L) and Charles Harder (C) attend a press conference to discuss legal action brought on his behalf on October 15, 2012 in Tampa, Florida. The first was a state court action against Heather Clem and Bubba the Love Sponge Clem. The second was a federal court action against Gawker Media. We know how that one went.

One of President Donald Trump’s attack dog attorneys has seized on the opportunity presented by Project Veritas “blow[ing] the whistle” on CNN President Jeff Zucker’s “personal vendetta” against the president. Harder on Friday issued a legal threat on Trump’s behalf that attorneys roundly mocked as “frivolous.”

Harder, who makes large sums of money through the president’s campaign, spent the lead-up to Friday composing a letter to a cable news network — a network Trump loves to beat up in GIFs — warning of legal action. The bottom line of Harder’s threat to Zucker and CNN Executive Vice President and General Counsel David Vigilante is that CNN better watch it, as it’s been engaging in false advertising (violating the Lanham Act) by claiming to be neutral and unbiased while actually Trump-hating shamelessly — as Project Veritas showed.

“Recently released video footage of individuals alleged to be your employees indicates that your reporting relating to President Trump is contrary to your own mission and the aforementioned Code of Ethics. Your own employees appear to state that CNN is focused on trying to ‘take down President Trump,’ driven by a ‘personal vendetta’ that Mr. Zucker purportedly has against him, rather than reporting the news in an objective manner,” the letter said. “In the Footage, your employees appear to state that CNN attempts to make its reporting appear neutral and unbiased, when in fact its reporting is far from neutral and highly biased against the President.”

The aforementioned examples are merely the tip of the iceberg of the evidence my clients have accumulated over recent years. We also expect substantial additional information about CNN’s wrongful practices to become known in the coming days and weeks. Never in the history of this country has a President been the subject of such a sustained barrage of unfair, unfounded, unethical and unlawful attacks by so-called “mainstream” news, as the current situation. Your actions are in violation of the Lanham Act (15 U.S.C. § 1051 et seq.), among other applicable laws, by constituting misrepresentations to the public, to your advertisers, and others. Accordingly, my clients intend to file legal action against you, to seek compensatory damages, treble damages, punitive damages, injunctive relief, reimbursement of legal costs, and all other available legal and equitable remedies, to the maximum extent permitted by law.

In recent days, President Trump and his eldest son have drawn attention to both the Project Veritas video and to Jeff Zucker.

No one is shocked that Zucker had a vendetta & would risk @CNN’s credibility to act on it. Look what went on at @NBC on his watch!

Now that we have found out that @CNN is a virtual fraud, rumor has it that Jeff Zucker will be resigining momentarily?

The president even asked out loud: “Does this sound like a good, or even great, lawsuit?”

Maybe not, because attorneys were quick to rubbish the letter penned by Harder. Project Veritas was pleased with the development, however, and teased more tapes.

Attorney Ted Boutrous represented CNN during the Jim Acosta-intern controversy, which is now a distant memory. Boutrous ensured that Acosta’s press pass was restored. He tore into Harder’s letter, calling it “absolutely ridiculous.”

This is an absolutely ridiculous letter. No serious lawyer would ever think of sending such a frivolous letter making such a baseless threat. https://t.co/omdWCE50fv

“No serious lawyer would ever think of sending such a frivolous letter making such a baseless threat,” he said. There was a sea of other reactions like it.

This is just embarrassing. The best claim they could dream up⁠—and even if it is only vaguely referenced⁠—is for a violation of the Lanham Act. 'You call yourself journalists but these people say you don't like me' does meet any of the elements of a Lanham Act violation. https://t.co/UllVMzqR4U

Trump is threatening to sue CNN. If the legal claims in his letter are any indication, I would think CNN will want him to sue and have a court decide this one. https://t.co/76jE8MZN3W

The notion that a politician or his re-election campaign is a competitor to a news outlet is silly https://t.co/v3WO7US4sv

Lexmark v. Static Control (2014): A plaintiff suing for false advertising under the Lanham Act "ordinarily must show economic or reputational injury flowing directly from the deception," which "occurs when deception of consumers causes them to withhold trade from the plaintiff.” pic.twitter.com/SDetNaKsm4

The paradox of giving this "Lanham Act" claim coverage: the chances of a suit actually being filed seem low, given the track record, but the fact that they want press for this also is worth noting as a sign of legal degeneracy https://t.co/xPNKaqAeft

Let’s put it in terms people can definitely understand:

Does Donald Trump stand any chance of winning a Lanham Act suit against CNN for allegedly holding itself out as unbiased"? Let me put it this way: I'll give the New York Knicks a better chance of winning the NBA championship every year for the next decade.

Attorney Gabriel Malor opined that CNN should keep its response to this threat short but not sweet:

Dear Mr. Harder, we received your baseless demand for payment for false advertising under the Lanham Act.

Since that’s not how the law works, you are invited to go fuck yourself.

CNN actually released a statement along these lines: “This is nothing more than a desperate PR stunt and doesn’t merit a response.”

In truth, Harder’s letter is one best read for oneself.