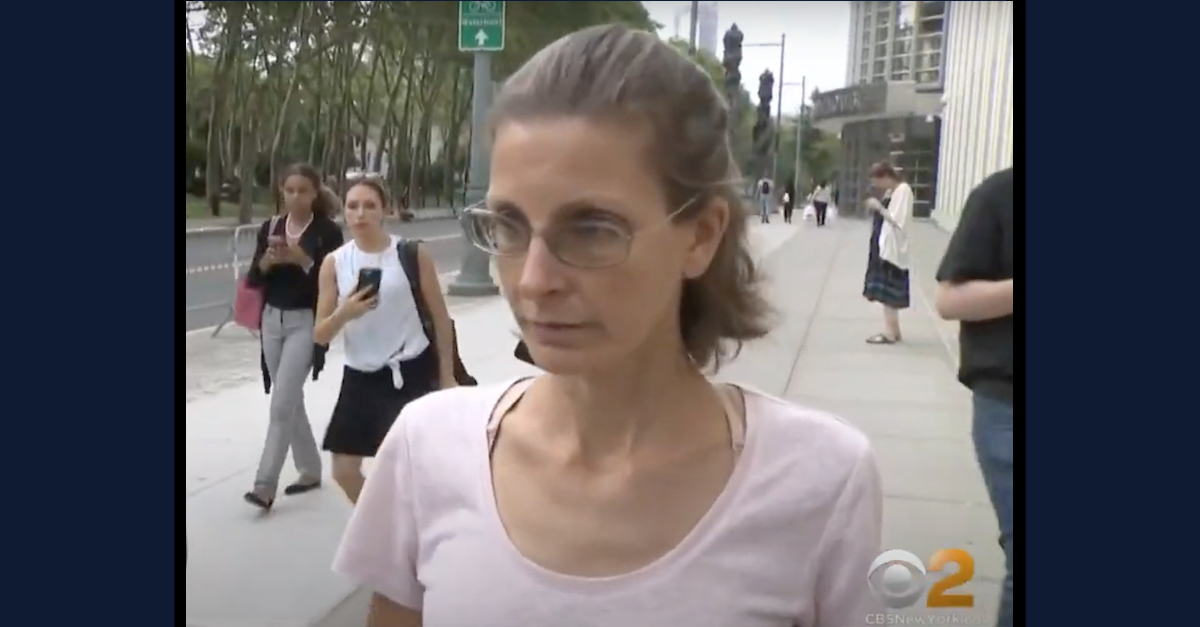 The Seagram’s liquor heiress who pleaded guilty to criminal charges in connection with the sprawling sex crimes prosecution of NXIVM cult leader Keith Raniere now wants a civil case against her thrown out of court.

Clare Bronfman’s attorneys said she had “little to nothing to do with most of the accusations” lodged by a series of plaintiffs against various NXIVM-connected defendants.  They added that the claims against her were nothing more than a “thinly veiled effort to intimidate and pressure a woman from a family well known in the national and international community.”

In a press release, the defense plainly asserted that the plaintiffs were in fact only seeking to “secure a big pay day” by targeting Bronfman with a lawsuit.  They also accused the plaintiffs of launching an “attempt to lump [Bronfman] into allegations regarding activities in which she played no part and of which she had no knowledge.”

Bronfman pleaded guilty in April 2019 to harboring an illegal immigrant for financial gain and fraudulent use of identification in a criminal case lodged against her by federal prosecutors in the Eastern District of New York. She was sentenced to 81 months in prison — about six and three-quarter years — in September 2020.  She also forfeited $6 million, agreed to provide restitution to a victim, and paid a half-million dollar fine, according to prosecutors who called her a “a high-ranking member of NXIVM’s Executive Board.”

While the criminal case was ongoing, a civil suit, styled as Edmondson v. Raniere, was filed in January 2020; it alleged that a bevy of NXIVM-connected defendants — including Raniere, Bronfman, former “Smallville” actress Allison Mack, and others — operated NXIVM as a “criminal enterprise” and “conspired . . . to commit sex trafficking, peonage, forced labor and human trafficking offenses.”  It also alleged that NXIVM “functioned as both a Ponzi scheme and a coercive community.”

“Defendants exerted power over the Plaintiffs; took their money; made it financially, physically and psychologically difficult, and in some cases impossible, to leave the coercive community; and systematically abused Plaintiffs physically and emotionally,” the lawsuit alleged.  “In doing so, the Defendants achieved a number of personal benefits including but not limited to enriching themselves; wielding power over others; advancing in the perverse social order they created; and enhancing their own feelings of self-esteem. Many of the Defendants also benefitted financially through the receipt of profits and substantial access to free labor, including personal assistants, housekeepers, drivers, personal shoppers and others.”

According to the civil suit, Clare and her sister Sara Bronfman allegedly “sponsored, financed, and facilitated” various “experiments,” including forcing various alleged victims to watch video of the “brutal beheading and dismemberment of five women in Mexico.”  Clare Bronfman also allegedly was involved with — and allegedly financed — plans for NXIVM to “hire[] 50-60 lawyers from 30 or so law firms to pursue litigation or threats of litigation against actual or perceived potential NXIVM critics,” the civil suit claims.

All of these allegations should be jettisoned from the docket, Bronfman’s attorneys wrote in a small collection of filings on Monday and Tuesday.  (Two of the documents contain purported signature dates of Jan. 28, 2022, but were only filed on April 11.)

The defense documents which seek to dismiss the matter start out by saying the plaintiffs “engaged in the same conduct which they now allege caused them harm.”  They also claim that the plaintiffs “most obviously . . . desire to seek monetary gain from Defendants perceived to have significant financial resources.”

“Plaintiffs likewise omit to mention that NXIVM’s goal was to help people live more ethical lives and create a more humanitarian society,” one of the documents indicates.  “All of that is ignored in service of Plaintiffs’ goal of converting their own participation and leadership in NXIVM into a claim for money damages. The First Amended Complaint (“FAC”) seeks to construct this distorted narrative to obfuscate the fact that it is legally deficient in numerous respects set forth in this motion to dismiss.”

The 217-page FAC is a sprawling mass of allegations that, as this Court noted, might charitably be read as potentially two different cases: a sexual assault case and consumer-fraud case. Plaintiffs rely on a “throw everything against the wall and see what sticks” approach in an attempt to stitch together a variety of RICO, Chapter 77, and state law claims against fifteen different Defendants. The result is a confusing, overcomplicated—and therefore inadequate—FAC. Even where Defendants are able to untangle the many narrative threads to make sense of Plaintiffs’ many claims, Plaintiffs do not meet their burden to survive a motion to dismiss.

“For her part, Clare Bronfman had little to nothing to do with most of the accusations leveled in the FAC,” the paperwork adds.  “Associating her with the oftentimes unsavory and salacious allegations is a thinly veiled effort to intimidate and pressure a woman from a family well known in the national and international community.”

“Simply put, Plaintiffs perceive Clare Bronfman as a deep pocket, and hope to use this litigation to obtain a windfall,” the document continues.  “Such strategic (or, at best, careless) pleading should not be rewarded. The FAC does not state cognizable claims against Clare Bronfman and should be dismissed with prejudice.”

“Plaintiffs specious legal tactics are about one thing: Clare Bronfman’s money,” Sullivan said.  “The Court should not reward this transparent attempt for self-enrichment and the Complaint should be dismissed immediately with prejudice as to Clare Bronfman in its entirety.”

Read the full arguments in search of a dismissal below: