Florida Fisherman Who Boasted About ‘Leading the Charge’ into the Capitol on Jan. 6 Gets Probation 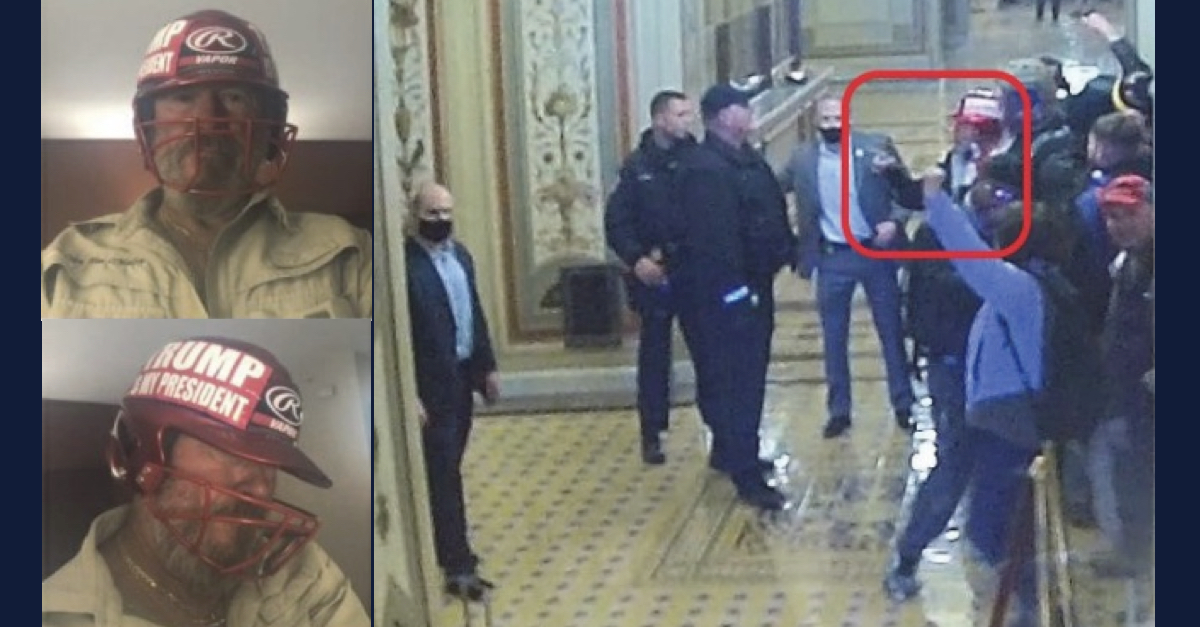 Timothy O’Malley pictured in a helmet covered in pro-Donald Trump stickers and confronting police in the Capitol building on Jan. 6. (via FBI court filing).

A Florida fisherman who wore a softball helmet and face guard to the riot at the Capitol on Jan. 6 and recorded himself bragging about breaching the building has been sentenced to two years of probation.

According to prosecutors, O’Malley, who has a small commercial fishing business in western Florida, decorated a softball helmet—with a face guard attached—with two pro-Trump stickers and brought it with him when he travelled from Florida to Washington in order to attend the rally.

“We took the Capitol!” he is heard saying on a “selfie-style” video that he took while inside the Senate Reception Room. “We’re moving on to other floors now! Whoo! Our house!”

O’Malley pleaded guilty in December to one count of parading, demonstrating, or picketing in a Capitol building, a misdemeanor punishable by up to six months in prison and a $5,000 fine. His plea deal included a provision that he cooperate with the government’s sprawling investigation into the perpetrators of the Capitol attack.

The government had requested a split sentence of 45 days in jail followed by three years of probation and 60 hours of community service. O’Malley had asked for a term of probation only.

According to court filings, O’Malley allegedly believed that the helmet would provide him safety from “antifa,” a loose collection of antifascist activists that is often depicted in right-wing media as violent instigators. Republican lawmakers also blamed “antifa” in the aftermath of Jan. 6.

There is no proof “antifa” was was involved in the Jan. 6 Capitol attack, something U.S. District Judge Christopher Cooper confirmed with prosecutor Sean Murphy.

“I have heard this argument in other cases,” Cooper, a Barack Obama appointee asked Murphy. “Just for the record, has the government’s investigation revealed any members of antifa or other counter-protestors throwing rocks or [otherwise] engaging in any violence on Jan. 6?”

Despite this, O’Malley stuck to his belief that antifa sympathizers were seeded among the Jan. 6 rioters.

“We did see them lurking in the shadows as we walked from the rally,” O’Malley said. “As long as you stayed in the group, you stayed safe.”

O’Malley also insisted that he had no intention to raid the Capitol, and was not aware that Congress was in the building certifying the Electoral College vote.

“The name of the rally was called the ‘Stop the Steal’ rally, right?” Cooper asked.

“Not that I was aware,” O’Malley responded, adding that he thought it was “just a rally to support” Trump.

“Let’s talk about your motivations for getting in a car, driving 12 hours, probably driving all night to come to Washington D.C.,” Cooper said. “Former President Trump was just about to get on a plane to go back to Florida, much closer to where you were. So why did you come to D.C.?”

“I was interested in going to a rally,” O’Malley said. “I didn’t know we were going to the Capitol. It felt like a pep rally.”

“I’m sure it did feel like a pep rally, but if you listened it sounded like they wanted to overturn the election and stop Congress from counting the votes,” Cooper said.

Cooper said that while O’Malley was on “the low end of culpability” among all the Jan. 6 defendants, and did not engage in violence or destruction of property, he didn’t entirely buy O’Malley’s expressions of remorse.

“You say now you are remorseful, but when I hear you talk I hear a lot more about how this has affected you and your business and your family than what I heard about the people who were injured,” Cooper said after advising O’Malley—who claims he didn’t know—that five people died at the Capitol that day, and four more police officers died from suicide afterwards. “I don’t hear a lot of genuine remorse [considering] the effect the event had on folks in our country.”

“I think you were sold a bill of goods [about] the election or what you thought this rally was,” he added.

However, in the end, Cooper sentenced O’Malley to two years of probation and 20 hours of community service, citing his declining health as a concern, including a lung cancer diagnosis that will likely require surgery.

O’Malley will also have to pay $500 in restitution toward the estimated $1.5 million in damage to the Capitol.