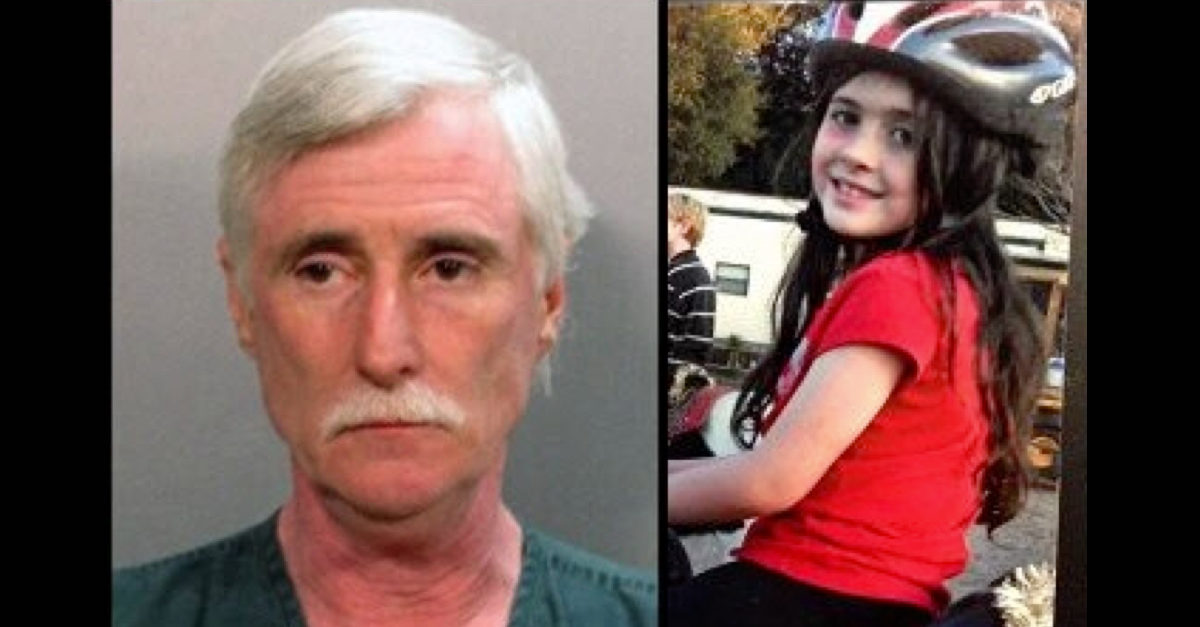 The Supreme Court has denied the appeal request of a Florida man facing the death penalty for the 2013 rape and murder of an 8-year-old girl.

Donald Smith, 65, has been on death row since his 2018 conviction for killing Cherish Perrywinkle.

He had kidnapped the girl after approaching her and her mother, Rayne Perrywinkle, along with Cherish and two other children. Smith had promised to buy them clothes from a nearby Walmart.

As Law&Crime previously reported, Rayne went against her gut instincts and took Cherish to the store with Smith. She testified that she was disarmed by Smith’s comments about his wife, whom he said would be joining them. She also doubted that anyone would try to kidnap a child while in a store with surveillance cameras and lots of people around.

But that is exactly what happened. Surveillance cameras showed Smith leading Cherish to the front of the store, initially appearing to head toward a McDonald’s, but instead taking her to his van.

Hours later, after an AMBER Alert was issued for Perrywinkle, Smith was found in his van, his clothes dirty and wet. Investigators searched a wooded area near where Smith’s van was believed to have been. They found Cherish’s body in a creek.

A jury convicted Smith after deliberating for just 15 minutes. Days later, the judge in the case sentenced him to death.

The Supreme Court didn’t issue a written order or explanation when it denied Smith’s request.

In his petition for a writ of certiorari, Smith said that comments made by the prosecutor during closing arguments amounted to prosecutorial misconduct.

In his filing, Smith’s attorney Richard Kuritz  acknowledged: “There was no doubt who committed this crime,” but he argued that the state prosecutor’s comment was “solely made to inflame the passions and emotions of the jury, which is evident in that the jury came back with a guilty verdict in just nineteen minutes.” [emphasis in original]

Kuritz added that the prosecutor’s statement “was a calculated attempt to inflame the jury,” one whose impact he argued carried over into the sentencing phase of the trial because it was made during closing.

Kuritz’s own closing argument said that the prosecutor improperly appealed to jurors’ emotions.

“This was an easy case – a slam dunk … Yet the prosecutor chose to enflame [sic] the jurors’ emotions and sense of retribution to assure a sentence of death against petitioner. In society, children are sacred. So, the prosecutor used that to his advantage—in stating that the child victim was ‘calling out to you from the grave.’ Why would a child call out from the grave? This was not in evidence. It was also not a general statement that the child was calling out from the grave, but that she was calling out to the jurors specifically – you – the individuals responsible for deciding if Petitioner should live or die.”

Kuritz said the prosecutor’s argument “rendered the trial fundamentally unfair and deprived petitioner his right afforded under the Eighth Amendment.”

Smith’s trial was closely watched both in Florida and nationwide. The prosecutor’s closing arguments matched the level of emotion seen throughout the trial: the medical examiner testifying at Smith’s trial broke down while on the stand due to the exceedingly graphic and horrifying details of Cherish’s murder.

Smith’s son had testified on his father’s behalf, asking the jury to spare his life. But it wasn’t enough for the jury.

“It’s not justice,” Cherish’s father, Billy Jarreau, told the Law&Crime Network after Smith’s sentence was handed down. “I don’t think there is a way to have justice in something like this.”