Rudy Giuliani’s Son Issues Video Rant Against Judges Appointed by Democrats; Says Politicized DOJ Is A ‘Cancer That Needs to Be Cut Out’ 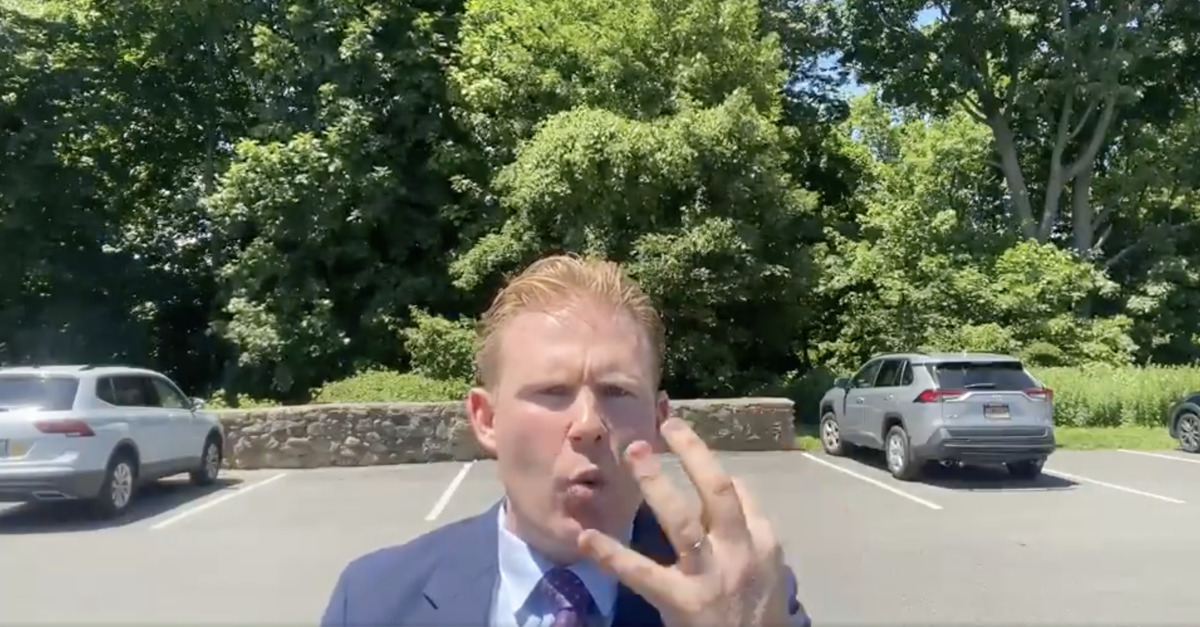 Republican gubernatorial candidate Andrew Giuliani issued a scathing statement attacking judges appointed by politicians of the Democratic Party in the Empire State and, for some reason, the federal justice system over his father recently being barred from practicing law.

Recall: Rudy Giuliani, a stalwart of former president Donald Trump and a GOP mainstay, had his law license suspended on Thursday for pressing numerous, repeated, unsourced, and debunked claims of fraud that he claimed took place during the 2020 presidential election. The elder Giuliani’s advocacy was deemed unbecoming of an attorney by the appellate court responsible for dealing with grievances filed against active New York State attorneys through the aptly-named Attorney Grievance Committee. The court said Giuliani did not offer sufficient proof to support claims of widespread problems with the election. It also criticized Giuliani for telling a judge he both was and was not presenting a fraud case.

“Respondent repeatedly represented to the court that his client . . . was pursuing a fraud claim, when indisputably it was not,” the disciplinary order said–referring to the above-cited back-and-forth between Giuliani and an unimpressed judge. “Respondent’s mischaracterization of the case was not simply a passing mistake or inadvertent reference.”

Enter the younger Giuliani and the minute-plus-long rant he shared on Twitter after the suspension was announced.

“Hi my fellow Americans,” the video begins. “Today it’s ‘my fellow Americans,’ not just my fellow New Yorkers. As you may have heard recently, a few minutes ago my father’s law license was suspended by the New York State First Appellate Division of the Supreme Court.”

Giuliani is currently an announced candidate in the Republican Party primary for New York State governor. That election will occur in November 2022.

“Now, the five judges that ruled on it,” the younger Giuliani noted before listing the names of each judge who sat on his father’s law license grievance panel, “all five of them are Democrats. Three of them were appointed by Andrew Cuomo.”

Those five Democratic appointees are Judge Rolando Acosta; Judge Dianne Renwick; Judge Sally Manzanet-Daniels, Judge Judith Gische and Judge Barbara Kapnick. During his brief address, Giuliani mispronounced and/or got wrong the names of at least two of the judges.

“Five to nothing, ultimately, Democrats — with zero Republicans on there,” Giuliani complained. “This is just unbelievable to see just how politicized all of this has become. I am infuriated by all this.”

Bar license suspensions are not generally considered political affairs.  (Indeed, the actual decision contains the names of the Republican and Democratic parties only to factually describe the partisan government committees before which Rudy Giuliani pressed his claims and to factually describe polling research.)  The court’s decision to bar one of the country’s most famous attorneys, however, was likely to be viewed through a partisan lens by Republicans upset about an attorney being sanctioned for essentially trying to hoodwink courts of law and legislative committees as to the facts and as to the law.

Despite the court’s findings, Giuliani’s son fashioned the suspension into a political attack premised on his family’s fealty to the Trump political brand.

“This is going after one of president Trump’s closest allies,” the younger Giuliani griped. “That’s exactly what this is. And any American that doesn’t believe that — they are just biased. This is unacceptable, and I stand by my father. He did everything, ultimately, by the book.”

That expression of his father’s allegiance to the rule of law, of course, is not how the judges saw things.

“[W]e conclude that there is uncontroverted evidence that respondent communicated demonstrably false and misleading statements to courts, lawmakers and the public at large in his capacity as lawyer for former President Donald J. Trump and the Trump campaign in connection with Trump’s failed effort at reelection in 2020,” the court noted in a paragraph which broadly described the suspension order.  “These false statements were made to improperly bolster respondent’s narrative that due to widespread voter fraud, victory in the 2020 United States presidential election was stolen from his client. We conclude that respondent’s conduct immediately threatens the public interest and warrants interim suspension from the practice of law, pending further proceedings before the Attorney Grievance Committee.”

The opinion which suspended the septuagenarian former federal prosecutor and mayor of New York City’s law license also zeroed in on the specifics of some of Giuliani’s claims.  For instance:

The angry Andrew Giuliani concluded his interpretation of the suspension order by lashing out at the federal government — even though his father was suspended by state authorities: