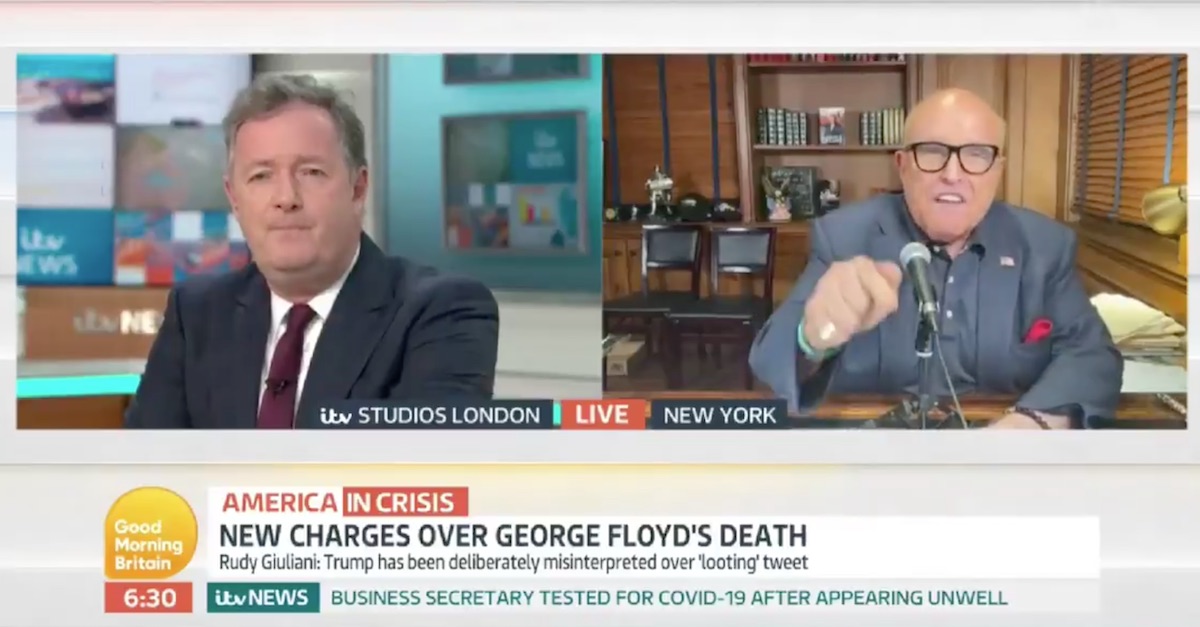 Rudy Giuliani most likely said that Piers Morgan “sucked up” but not that’s not what the hosts and certain people on Twitter thought he said. In a wild interview Thursday now making the rounds on social media, President Donald Trump’s personal attorney and advocate Giuliani repeatedly ripped the presidentially unfollowed Morgan on his Good Morning Britain show for getting thrown off of television in the United States.

Just before the nuclear eruption, Morgan dinged the president for his “when the looting starts, the shooting starts” tweet amid outrage over the police killing of George Floyd in Minneapolis two Mondays ago. Giuliani said that the tweet from the president was an “accurate warning.”

“If you continue to loot, you’re going to bring about violence!” he said.

“You’re the one who got thrown off of television here because you had ratings that were about 2.  So don’t tell me I’ve lost anything,” Giuliani answered.

“I know what happened to your show, Piers, and I remember the mistakes you made, and I remember how you sucked up,” Giuliani said, possibly referring to Piers Morgan’s left-aligned stance on gun control.

“Everyone in America knows you’re a failed journalist,” Giuliani added.

Morgan immediately apologized for the language Giuliani used, apparently thinking that an F-bomb had been dropped. Co-host Susanna Reid appears to have thought the same. They accused Giuliani of “using profanity.”

In fairness to Giuliani, if you listen to the video closely and repeatedly it sounds and looks like he said “sucked up.”

Others heard and saw differently.