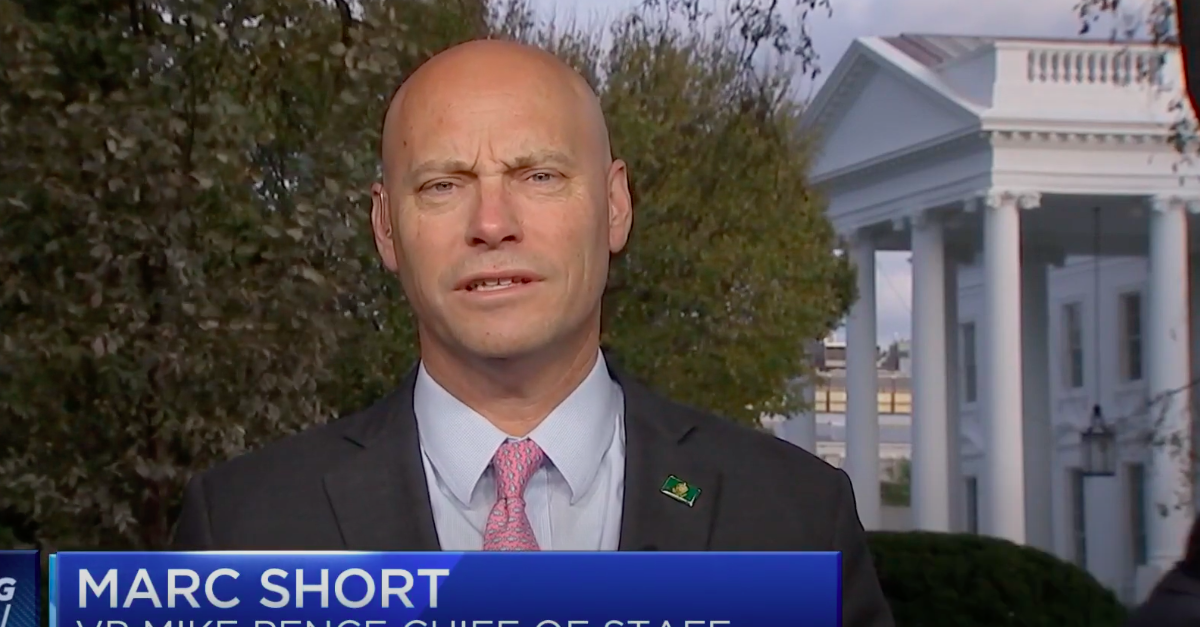 A government watchdog organization on Tuesday asked the Federal Bureau of Investigation (FBI) to open an investigation into whether the Mike Pence’s Chief of Staff Marc Short has violated criminal conflict of interest laws by maintaining stock holdings in companies that are directly affected by the federal government’s pandemic response. Short, a prominent member of the administration’s pandemic response task force that was headed by Vice President Pence, appears to have been involved in meetings with particular companies whose stock he held, even after filing paperwork that essentially conceded he was aware of the conflict of interest.

In a letter to FBI Director Christopher Wray, the group Citizens for Responsibility and Ethics in Washington (CREW) laid out several reasons why Short appeared to be violating the law, particularly highlighting the fact that Short had sought a Certificate of Divestiture (CD) from the Office of Government Ethics (OGE).

CDs allow government officials to offset the capital gains tax burden of selling assets deemed to be conflicts of interest with their public work. However, merely applying for a CD requires that officials attest to having a possible conflict of interest.

“In seeking a CD, OGE’s regulations required the Vice President’s ethics officer to concede that divestiture was reasonably necessary to resolve conflicts of interest,” the request stated, referring to 5 C.F.R. § 2634.1005. “Those regulations also required Mr. Short to pledge that he would divest the stocks whether or not OGE granted a CD.8 OGE ultimately denied Mr. Short a CD, not because his stock posed no conflicts of interest, but because he would not divest all of them.”

The letter, penned by CREW Executive Director Noah Bookbinder and former OGE director Walter Shaub, went on to explain that despite claims Short recused himself from particular matters involving his investments, he has directly implicated himself in media appearances and public statements.

“Mr. Short holds 3M stock worth between $65,002 and $150,000 and Honeywell stock worth between $50,001 and $100,000,” the request stated, citing to Short’s publicly filed financial disclosures. “Nevertheless, in a March 18 interview with Fox News, Mr. Short discussed Vice President Pence’s trip to meet with executives of 3M Company. He also highlighted a related legislative effort to enact product liability protection for 3M Company and other manufacturers involved in the coronavirus response.  Similarly, on March 20, Mr. Short touted the work of Honeywell in responding to the pandemic.”

Shaub resigned from the OGE position months after Trump’s inauguration.

CREW implored the FBI to follow up on several reports concerning Short’s holdings and his participation in government work directly implicating the underlying companies.

“While Marc Short helps craft and guide the government’s coronavirus response efforts, he appears to have maintained financial interests that could be affected by those efforts — and could influence his decision-making on important issues,” Bookbinder said in a press release accompanying the complaint. “His actions run the risk of violating the conflicts of interest laws we rely on to keep government employees transparent, honest and accountable for their actions.”

Read the full CREW complaint below: