Rudy Giuliani and Victoria Toensing Are Not ‘Above the Law’ Because of Their ‘Important Clients,’ Feds Say 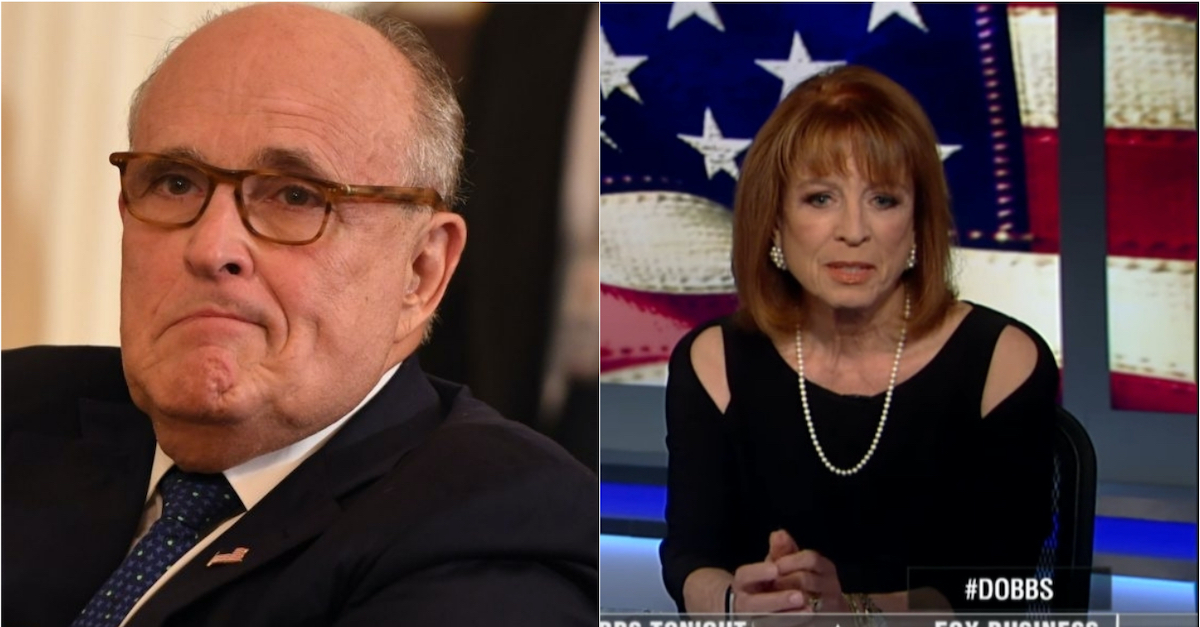 Federal prosecutors argued in a legal brief that Rudy Giuliani and Victoria Toensing should not be “above the law” because of their connections as attorneys, warning that the lawyers’ quest for information about their search warrants could compromise an active grand jury investigation against them and “others.”

“Giuliani and Toensing’s additional requests proceed from a central premise: that a different set of rules apply to them because of who they are, whether it is because they are lawyers or lawyers with important clients,” Assistant U.S. Attorney Rebekah Donaleski wrote in a 37-page legal brief on Thursday evening. “Giuliani and Toensing are lawyers, to be sure. But this Court has found probable cause that their devices and accounts contain evidence of specified federal crimes.”

The former New York City mayor’s lawyer Robert Costello bristled at the government’s comments in an email to Law&Crime.

“It’s a silly argument,” Costello wrote. “Rudy Giuliani would be the first one to admit that no one is above the law. That is why he has always adhered to the law and enforced the law rather effectively when he was the United States Attorney-ask any organized crime family!”

Giuliani indeed burnished a reputation for prosecuting the Italian mafia when he served as U.S. Attorney for the Southern District of New York decades ago, before becoming a reported target of the same office he once led. Times have changed since then, and so has the focus of Giuliani’s lawyering.

Prosecutors do not spell out the names of his and Toensing’s “important clients,” whose identities would be known to even non-legal observers. The former New York City mayor is the sometime lawyer for former President Donald Trump and Toensing, a conservative lawyer and sometime conservative media commentator, worked with Giuliani on the sprawling effort to overturn the 2020 election.

Toensing also represented Ukrainian oligarch Dmytro Firtash, who is facing federal bribery charges in the United States and whose name came up repeatedly in connection with the smear campaign against President Joe Biden and his son Hunter Biden, which led to Trump’s first impeachment. Prosecutors executed covert warrants on Giuliani and Toensing’s iCloud accounts on Nov. 4, 2019—during the height of Trump’s Ukraine scandal.

As that drama unfolded, Giuliani told NBC News that he had “nothing to do with Firtash,” whom diplomatic cables published by WikiLeaks linked to Russian organized crime. Giuliani told the network that reports to the contrary were a “smear job.”

Asking a federal judge to disclose the basis for those searches—and the ones on their electronic devices late last month—lawyers for the Giuliani and Toensing now want to unseal affidavits disclosing the basis for the warrant, and they want to review what the government is seeing.

Prosecutors bristled at those requests.

“Nevertheless, Giuliani argues that, quite unlike other subjects of criminal investigations, he is entitled to review the affidavits supporting the warrants, which would effectively give him the extraordinary benefit of knowing the Government’s evidence before even being charged with a crime,” the government’s brief states. “Giuliani and Toensing seek pre-charge discovery of all of the Government’s responsiveness and privilege designations before a criminal case has been initiated, even though they are not entitled to such discovery. Toensing seeks the extraordinary remedy of depriving the Government of all access to lawfully obtained evidence, so that she may determine which of her own emails, text messages, and data the Government is entitled to see.”

Such a request, prosecutors say, can compromise a “multiyear grand jury investigation, which would risk compromising and obstructing that ongoing investigation.”

“Giuliani and Toensing, like anyone, are entitled to the full protection of the law—but no more,” their brief states. “Their efforts to deprive the Government of lawfully obtained evidence are meritless and in many respects premature.”

The discovery fight began with prosecutors taking it upon themselves to request a special master from U.S. District Judge J. Paul Oetken, a Barack Obama appointee who authorized the warrants and is presiding over the attorney-client privilege dispute.

This requested special master review, a process that preceded Michael Cohen’s prosecution, was cited by prosecutors as the government going “above and beyond” their obligations.

“While the law does not require the appointment of a special master, the Government believes it is appropriate here based on the unique circumstances of this investigation and the very public nature of the searches at issue, in order to ensure that the privilege review process is both fair and has the appearance of fairness,” prosecutors wrote. “But, to be clear, the mere fact that Giuliani and Toensing are lawyers does not mean that they are above the law or immune to criminal investigation.”

On Thursday, Judge Oetken lifted redactions from a previously disclosed letter from prosecutors revealing that the authorities seized 18 electronic devices from Giuliani and his employees. Giuliani’s lawyer Costello told the New York Daily News that the haul accidentally included Giuliani’s most recent ex-wife’s computer. Authorities reportedly returned that device to her.

Costello had nothing to add about that report—and the other 17 devices—when pressed about it by Law&Crime.

Update—May 21 at 11:42 a.m. Central Time: This story has been updated to include a quote by Giuliani’s lawyer Robert Costello and relevant context.