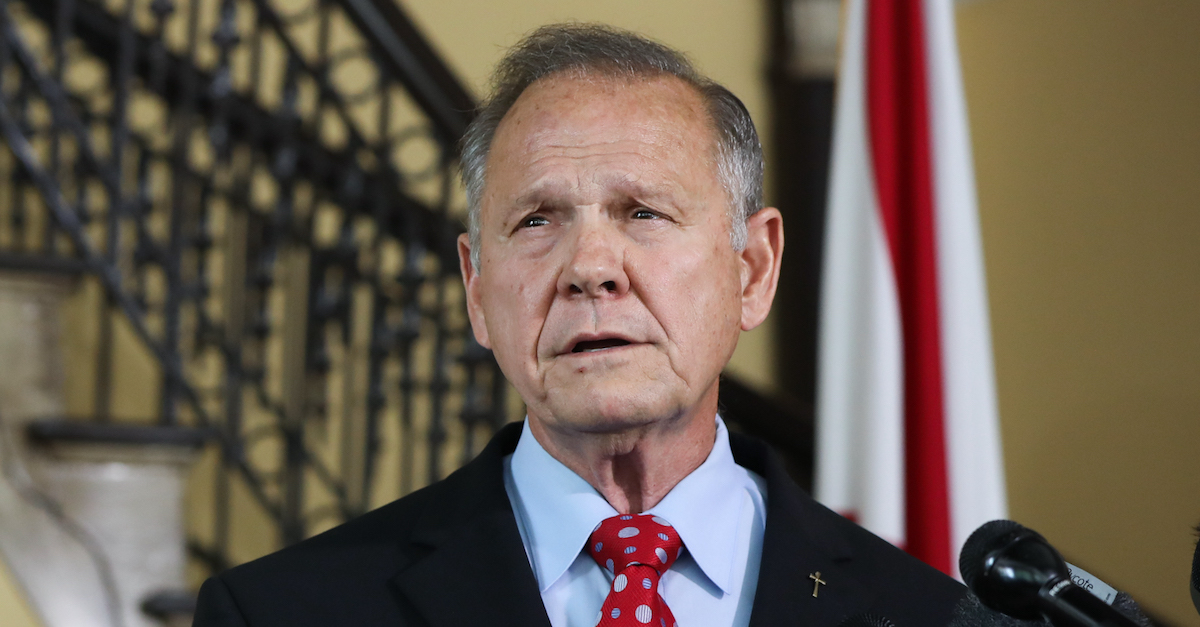 Former Alabama Republican Senate candidate Roy Moore, who lost a close election in 2017 amidst various misconduct allegations, won a multimillion dollar victory against a Democratic-aligned Super PAC last week over claims that he was defamed in an advertisement.

After years of legal wrangling, the former chief justice of the Supreme Court of Alabama finally got his days in court. And it paid off big — to the tune of $8.2 million.

The onetime GOP hopeful filed several defamation lawsuits in the aftermath of his loss to one-term senator Doug Jones. Some of those efforts have been unsuccessful, including a string of high-profile losses to Sacha Baron Cohen earlier this year.

Originally filed in November 2019 against multiple defendants, the present case made its way through the federal court system and shed most of those defendants through motions to dismiss granted by the Northern District of Alabama. But in May of this year, Moore prevailed against the Senate Majority PAC’s motion to dismiss, as Judge Corey L. Maze allowed the defamation allegations to go to trial.

The substance of the dispute concerned two separate pieces of reporting from two separate publications about two separate allegations leveled against Moore during the 2017 special election.

“Moore was actually banned from the Gadsden Mall,” the New American Journal reported on Nov. 12, 2017, “for soliciting sex from young girls.”

“One he approached ‘was 14 and working as Santa’s helper,'” AL.com reported the next day.

The advertisement by the Democratic Party-affiliated group more or less mashed those two pieces of reporting together.

The text from that commercial read, in part:

What do people who know Roy Moore say?

Moore was actually banned from the Gadsden mall … for soliciting sex from young girls…One he approached was 14 and working as Santa’s helper.

The former judge‘s attorneys argued that this juxtaposition falsely claimed Moore solicited sex from girls at shopping malls – including from the 14-year-old girl who worked as a Santa’s helper.

The court agreed that was a plausible way of understanding the attack ad.

[T]he Defendants argue that the shopping mall ad was accurate and that [Senate Majority PAC} reasonably believed that it was accurate. Moore counters that, by juxtaposing the quotes as they did, the Defendants intended to “convey that the 14 year old Santa’s Helper was ‘one’ of the ‘young girls’ that Moore was ‘actually banned from the Gadsden Mall . . . for soliciting sex from.’” The court finds that the Defendants’ intent in placing these quotes back-to-back is a question of fact for the jury.

A one-week long trial was held in Anniston, Alabama. Federal jurors were given 16-pages worth of jury instructions by the district judge that recounted the legal conclusion(s) above, the applicable law, and the legal standards for defamation – including the high bar of actual malice that is necessary to consider in cases concerning public figures like Moore.

Across the board, the plaintiff won.

Jurors wholly ruled in Moore’s favor on the defamation claim.

Moore also scored a victory on a claim of invasion of privacy, false light.

“We’re very thankful to God for an opportunity to help restore my reputation which was severely damaged by the 2017 election,” Moore told the Associated Press after the verdict was returned.

The Senate Majority PAC told the wire service they plan to appeal.

“No amount of deflection or distraction from Roy Moore will change the fact that multiple individuals testified under oath to corroborate credible accusations against him,” attorney Ben Stafford told the AP. “Many others have come forward to make their allegations public, at serious personal cost. We do not think this verdict is the right decision, but we believe the facts are clear and this ruling will be overturned on appeal.”