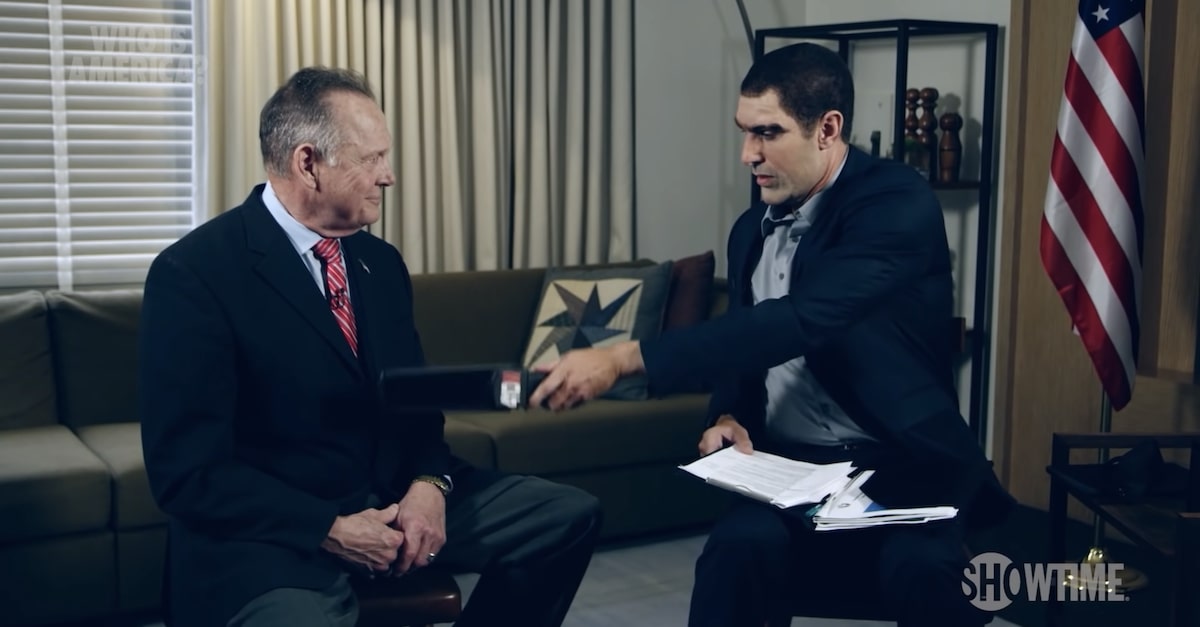 Comedian Sacha Baron Cohen runs a supposed pedophile detector on Judge Roy Moore, who was accused of sexual misconduct involving minors during his run for Senate. Moore sued over the comedy sketch, claiming it defamed him.

The ruling falls less than a month after Moore’s attorney Larry Klayman compared his client to Johnny Depp before a skeptical three-judge panel at the Second Circuit Court of Appeals.

“He deserves a jury,” Klayman said of Moore on June 10.

The Second Circuit panel did not take long to unanimously disagree, returning an 11-page summary order extolling the virtues of comedy as a vehicle of social commentary.

“Humor is an important medium of legitimate expression and central to the well-being of individuals, society, and their government,” the court’s order states, citing a book by Senior U.S. Circuit Judge Robert D. Sack, a Bill Clinton appointee. “Despite its typical literal ‘falsity,’ any effort to control it runs severe risks to free expression as dangerous as those addressed to more ‘serious’ forms of communication.”

Sack was not on the three-judge panel considering Moore’s case; his words were merely cited. U.S. Circuit Judges Rosemary Pooler, Gerard Lynch and Raymond Lohier presided over Moore’s appeal and rejected it. Pooler was appointed by Clinton; Lynch and Lohier were appointed by Barack Obama.

The former Alabama judge and his wife Kayla Moore sued Cohen, Showtime and its parent company CBS over a skit from the comedian’s program “Who Is America?” Playing the role of a former Mossad agent and counterterrorism expert, Cohen purported to test advanced Israeli pedophile detector technology on Moore. The device, actually a magnetometer, activated when placed near Moore.

“The segment opened by referencing news clips of the allegations that Judge Moore had engaged in sexual misconduct, including with minors, and what followed was an attempt to comment on those allegations through humor,” the court’s order states. “Baron Cohen may have implied (despite his in-character disclaimers of any belief that Judge Moore was a pedophile) that he believed Judge Moore’s accusers, but he did not imply the existence of any independent factual basis for that belief besides the obviously farcical pedophile-detecting ‘device,’ which no reasonable person could believe to be an actual, functioning piece of technology.”

The three-judge panel provided another reason to reject Moore’s appeal: the lengthy release the former judge signed before appearing on the show.

Moore claimed that the agreement was unenforceable because his consent was procured fraudulently. He also asserted the release waiver didn’t apply because he crossed out a section forfeiting his privacy rights and that it was an unenforceable general release.

The Second Circuit panel rejected each of those arguments in turn.

“Even if Judge Moore intended not to waive any claims arising from accusations of pedophilia or sexual misconduct, ‘a party’s subjective intent and understanding of the terms is irrelevant,'” the court’s order states.

In a phone interview, Klayman criticized the summary order as a “poorly reasoned” decision by “Clinton and Obama appointees that they stated should not be used as precedent.” Rulings issued by summary order do not have precedential effect.

“I mean, frankly it’s a disgrace — and you can quote me on that,” added Klayman, who vowed to pursue an appeal before a full en banc panel of the Second Circuit.

Klayman argued that “at minimum” the consent agreement had an ambiguity that should have been resolved by a jury. The conservative lawyer and activist also stood by his earlier analogy between Moore and Depp.

“The Johnny Depp case was one of the few instances where a male, a male has actually prevailed — a white male — and consequently, we were hoping the same would occur here,” Klayman said.

Klayman followed with an email to Law&Crime that repeated some of the same thoughts:

The decision is so poorly reasoned that even these three partisan Clinton and Obama judicial appointees won’t stand behind it — writing that it is not to be cited as precedent!

This travesty of a ruling will now be appealed en banc to the entire Second Circuit.