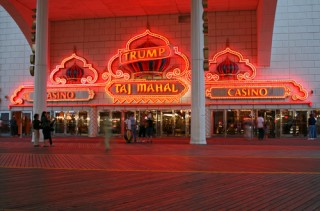 The Donald Trump hits just keep coming from The New York Times. Wednesday’s cover article was a deep dive into an apparent sweet deal that then New Jersey Governor Chris Christie gave to Trump on his mounting casino tax debt that was plaguing his business. The article goes on to speculate if Trump was given “special treatment” because of his close relationship with the New Jersey Governor.  From 2002 through 2006, as Trump’s casinos in New Jersey struggled financially, Trump also faced a mounting unpaid tax bill that the business claimed they couldn’t afford. That suddenly changed in 2011 when Chris Christie took officer.  The article states:

The total (Tax bill), with interest, had grown to almost $30 million. The state had doggedly pursued the matter through two of the casinos’ bankruptcy cases and even accused the company led by Mr. Trump of filing false reports with state casino regulators about the amount of taxes it had paid.

But the year after Governor Christie, a Republican, took office, the tone of the litigation shifted. The state entertained settlement offers. And in December 2011, after six years in court, the state agreed to accept just $5 million, roughly 17 cents on the dollar of what auditors said the casinos owed.

From $30 million in debt — to a $5 million settlement. Not a bad deal. The Times notes that despite not be able pay his taxes, Trump’s casino company continued to a rent a helicopter at the price tag of $390,000 a year. The article did note that a spokesperson for Christie said that he was not aware of the tax deal and therefore could not comment on the settlement.  However, throughout the settlement talks in 2011 , the article notes Christie and Trump were seen going on double dates with their wives.  This piece comes just two days after a big expose on Trump’s campaign manager, Paul Manafort, and his alleged ties to the Ukraine, which included a secret ledger that apparently outlined $12.7 million in cash payments.  Manafort has strongly denied the allegations.

Christie has been a close campaign advisor to Trump, and was apparently in the running for the vice presidential slot. Trump’s team didn’t get back to The Times about their piece.