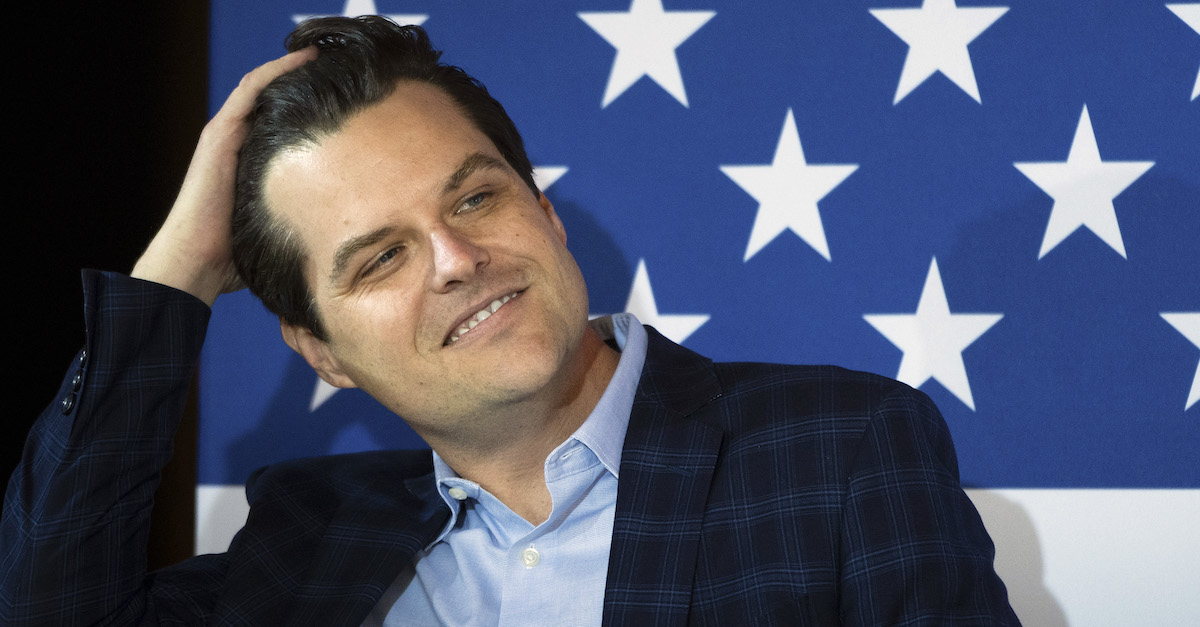 Citing several unnamed sources “familiar with the matter,” the Washington Post on Friday reported that “career prosecutors” have recommended against filing charges against Rep. Matt Gaetz (R-Fla. 1) in a sex trafficking probe.

The D.C.-based newspaper said no official decision had been made on whether or not to charge the congressman but that it was “rare for such advice to be rejected.”

Gaetz’s attorney refused to comment when contacted by the Post; the U.S. Department of Justice also declined to issue any remarks.

The New York Times in March 2021 reported that the DOJ had been investigating whether Gaetz, now 40, paid a 17-year-old girl to travel with him while the pair was engaged in a sexual relationship. Gaetz was 38 when the Times report dropped.

According to that 2021 report:

Investigators are examining whether Mr. Gaetz violated federal sex trafficking laws . . . . A variety of federal statutes make it illegal to induce someone under 18 to travel over state lines to engage in sex in exchange for money or something of value. The Justice Department regularly prosecutes such cases, and offenders often receive severe sentences.

Gaetz repeatedly denied wrongdoing in connection with the matter by saying he has never paid for sex.

“I have a suspicion that someone is trying to recategorize my generosity to ex-girlfriends as something more untoward,” Gaetz told the Times.

The congressman also told the news organization Axios that any “allegations of sexual misconduct against” him were “false.”

“I believe that there are people at the Department of Justice who are trying to criminalize my sexual conduct, you know when I was a single guy,” Gaetz reportedly said.

Gaetz further asserted that he was “absolutely” certain (his word) that “none of the women” in question “were underage” (to borrow Axios’s characterization of his words).

“I have definitely, in my single days, provided for women I’ve dated,” Gaetz further told Axios. “You know, I’ve paid for flights, for hotel rooms. I’ve been, you know, generous as a partner. I think someone is trying to make that look criminal when it is not.”

Gaetz has also suggested that the accusations against him were being muddled or conflated with an extortion plot against his family that was the subject of a parallel DOJ probe. That plot ended with a recent sentence, as Law&Crime reported on Aug. 23.

However, Gaetz also sought a pardon from former President Donald Trump while Trump was in office, according to CNN and other reports based on comments John McEntee allegedly made to the House Select Committee on the January 6th Attack. McEntee was White House Presidential Personnel Office Director at the relevant time; he reportedly said that Gaetz sought out former White House Chief of Staff Mark Meadows for information about a pardon. Gaetz has been a vociferous and longtime Trump supporter.

The plot thickened when longtime Gaetz confidant, friend, and so-called “wingman” Joel Greenberg, a Florida tax collector, pleaded guilty in May 2021 to sex trafficking a child as part of a 33-count third superseding indictment. Greenberg agreed to give “substantial assistance” to federal prosecutors as part of a plea agreement that wiped clean the multiple charging documents on file in return for direct admissions to six of the 33 final counts. 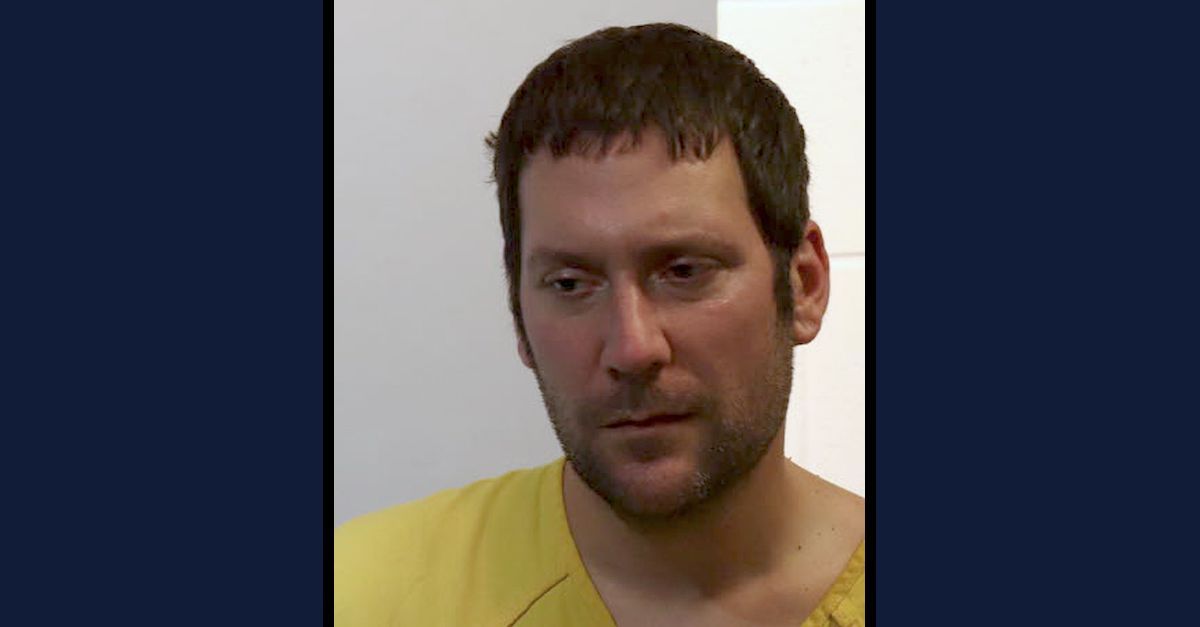 According to Friday’s Washington Post report, a grand jury heard from both Greenberg and “an ex-girlfriend” of Gaetz.  Those witnesses zeroed in on a trip Gaetz “allegedly took to the Bahamas in 2018” with several women.

The Post explained the problems with what the ex-girlfriend allegedly revealed:

The 17-year-old at issue in the investigation was also on that trip, though by that time she was already 18 or older, people familiar with the matter have said. She has been a central witness in the investigation, but people familiar with the case said she is one of two people whose testimony has issues that veteran prosecutors feel would not pass muster with a jury.

Their fears, according to the Post, are at least partially connected to the core essence of one of Greenberg’s six guilty pleas. When a Florida teacher ran against Greenberg for the office of tax collector, Greenberg admitted that he sent fake missives to the rival candidate’s school district to accuse the teacher of engaging in sex acts with a student. Greenberg pleaded guilty to a count of stalking connected to that political hit job.

Again citing “a person familiar with the matter,” the Post said that Greenberg “has been providing investigators information about Gaetz since last year.”  However, because Greenberg pleaded guilty to a count of stalking surrounding fake accusations involving sex, prosecutors are loathe to trust whatever accusations Greenberg may have levied against Gaetz, the Post reported.

Prosecutors also have broader fears about Greenberg’s general status as an admitted criminal, the Post said. His admissions to six crimes — (1) sex trafficking of a child between the ages of 14 and 18, (2) producing a fake ID for himself, (3) aggravated identity theft involving two others, (4) wire fraud, (5) stalking, and (6) a combination of bribery, wire fraud, submitting a false claim, theft of government property, and wire fraud — could significantly color any testimony he were to provide against anyone else.

Indeed, as the Washington Post noted, a lawyer for the teacher targeted by Greenberg indicated last year that “nobody’s going to believe anything that Joel Greenberg says by itself.”

The newspaper also noted that the probe involving Gaetz commenced “with the approval of then-Attorney General William P. Barr” during the Trump administration.

The problem with DOJ’s approach to the Gaetz case is you don’t cooperate a horrible person like Joel Greenberg *unless and until* you know for sure you can and will rely on his testimony. To flip Greenberg and decide later that he’s unusable is atrocious prosecutorial practice.

Prosecutors flip bad guys all the time; I’ve flipped killers. But you don’t give a cooperation deal until you have fully vetted them and are sure they are strongly corroborated. To do otherwise is to cut Greenberg a huge break, without making other big cases from his testimony.

And you don’t flip an unspeakably horrible person like Greenberg — admitted child sex offender, perjurer, and fraudster — to go after the riffraff.

Working off of the Post’s report, the Orlando Sentinel quoted Greenberg’s attorney as skeptical.

“I have not received any information from the government regarding its decision to abandon its investigation and prosecution [of Matt Gaetz],” Greenberg attorney Fritz Scheller reportedly said.  “Nevertheless, based on my knowledge of the evidence, I would be surprised by such a decision.”