Feds Charge Florida Man in $25 Million Plot to Shake Down Rep. Matt Gaetz and His Father by Dangling Prospect of ‘Presidential Pardon’ 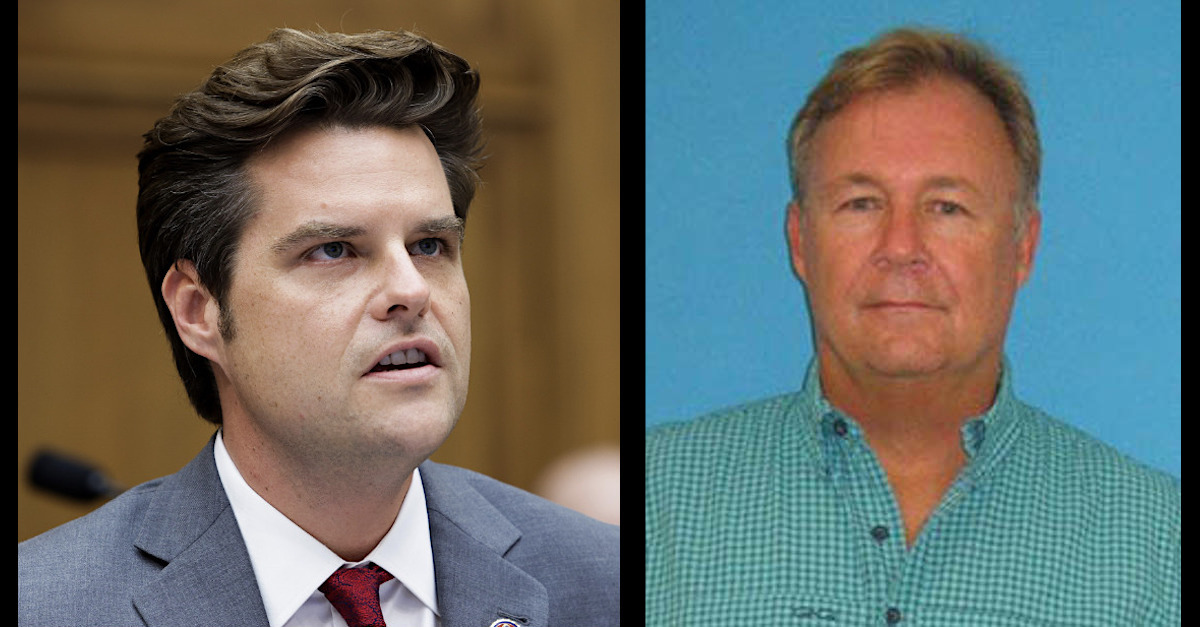 Roughly half a year after Rep. Matt Gaetz (R-Fla.) alleged a massive “extortion” scheme against him, federal prosecutors accused the man at the center of the congressman’s tale of trying to shake him down for $25 million.

Florida man Stephen M. Alford, 62, could spend much of his golden years behind bars if convicted of on counts of wire fraud and the attempted prevention of the seizure of an electronic device. The charges carry a possible 25-year sentence.

What Gaetz called “extortion” is legally being billed by federal prosecutors as a “scheme to defraud.”  Extortion would have been a separate crime which is not charged.

Though court papers do not list Gaetz by name, references to the pro-Donald Trump Republican are unmistakable in a six-page indictment unsealed by prosecutors on Tuesday.

For months, Gaetz has told a startling similar tale to the one told by prosecutors in the indictment, right down to the dollar amount. As a sex trafficking investigation heated up around his ex-political ally Joel Greenberg, Gaetz revealed the alleged plot for the first time in a Twitter thread on March 30. The congressman wrote that he had been cooperating with the FBI on the matter, and he claimed that his father wore a wire in an effort to catch the alleged “extortionist” who allegedly hoped to capitalize on a sex-trafficking scandal that appeared to be closing in around Gaetz.

Over the past several weeks my family and I have been victims of an organized criminal extortion involving a former DOJ official seeking $25 million while threatening to smear my name.

We have been cooperating with federal authorities in this matter…

The name of the suspect, Alford, emerged shortly after Gaetz broke his silence on social media.

The indictment even mirrors the details of the scheme: Alford allegedly hoped to fund the rescue of former FBI agent Bob Levinson, who is now presumed dead after disappearing in Iran in 2007. Reportedly on a mission for the CIA, Levinson is believed to have been captured by the Iranian government, which in turn was slapped with a $180 million judgment by a U.S. court.

According to the new indictment, Alford promised “D.G.” — presumably the thinly veiled initials of the congressman’s father Don Gaetz — that his family member would receive “a Presidential Pardon, thus alleviating all his legal issues” if he spent millions on a Levinson rescue mission titled “Project Homecoming.”

“Stephen M. Alford falsely represented in the ‘Project Homecoming’ letter that his ‘team has been assured by the President’ that he will ‘strongly consider’ a ‘Presidential Pardon’ or ‘instruct the Department of Justice to terminate any and all investigations involving [Family Member A]” should the team be able to secure the purported release of R.L. from captivity,” the indictment states in an apparent reference to Robert Levinson.

Prosecutors claim that Alford sent his string of text messages between March 16 and April 7 of this year.

Alford, described by a Florida news outlet as a twice-convicted felon, is currently in the custody of the U.S. Marshals, prosecutors say.

Since Gaetz went public about the alleged plot, Greenberg pleaded guilty to sex trafficking. His sentencing has been postponed because prosecutors say the reported ex-wingman for Gaetz has been busily cooperating with the government.

In his plea agreement, Greenberg admitted to trafficking a minor for sex, and he said that several other adult men also paid a 17-year-old girl for sex and also provided her with drugs, including ecstasy. Gaetz, who remains under investigation for an alleged relationship with the girl, denies wrongdoing.

Greenberg was facing 33 federal charges, but he pleaded guilty to only six.

Though prosecutors released Alford’s indictment, his criminal docket remains under seal, with no attorney information visible.

[Image of Gaetz via Graeme Jennings/Pool/Getty Images; image of Alford via the Florida Department of Corrections]